What to know before you get a hand and finger tattoo 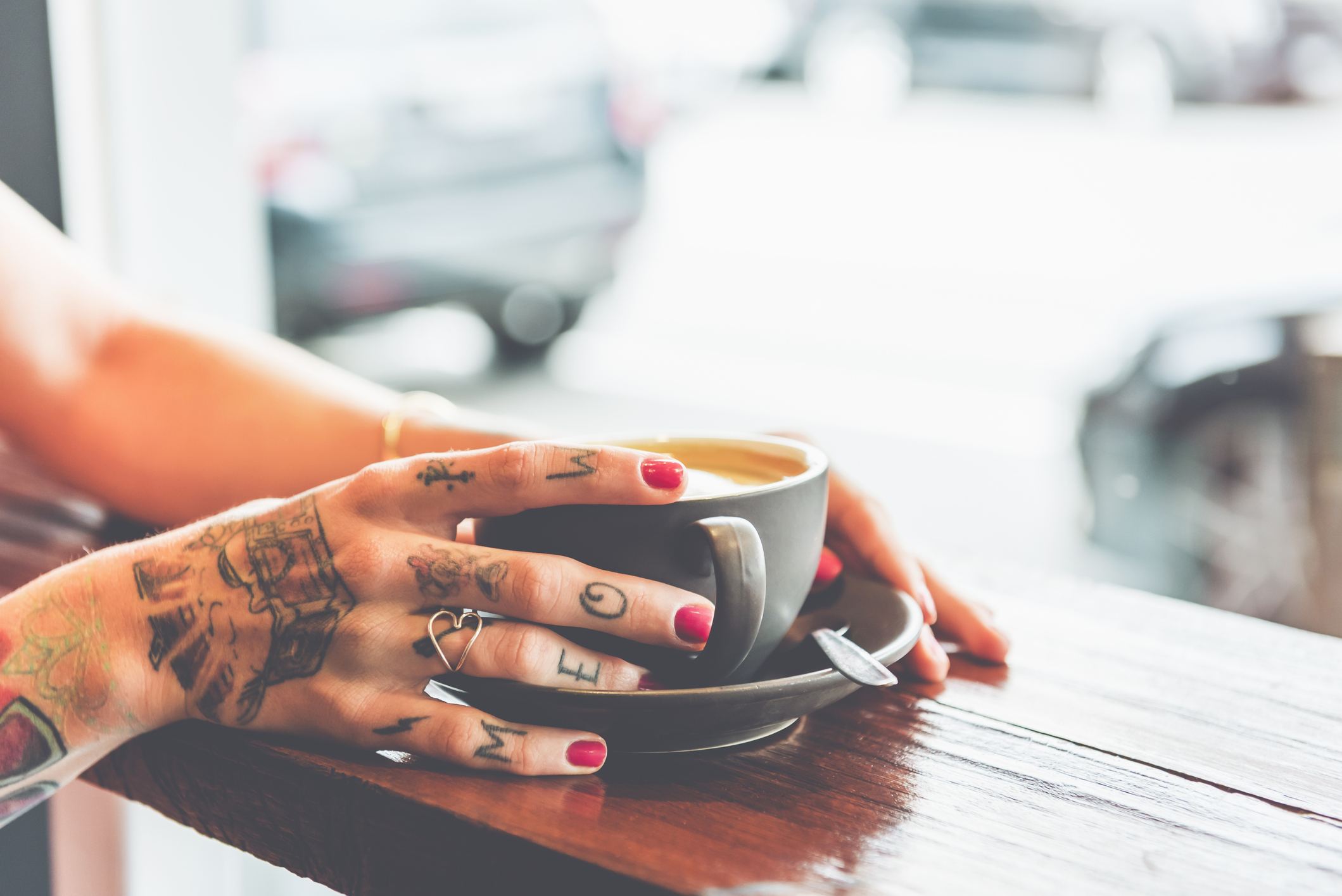 In the tattoo world, hand ink feels like a Big Step.

They’re nigh on impossible to hide without heavy duty makeup, and there’s a lot of chat about high pain levels, excessive fading, and did I mention sky-high pain levels?

However, I just so happen to have caught the finger tat bug so, full of professional and personal curiosity, I decided to speak to people about their hand ink to see how they feel about it.

As tattoo artist Sol Wright tells Metro.co.uk: ‘With the emergence of fine line and, more recently, single-needle tattooing, hand tattoos are more accessible and more popular than ever.’

Still expecting at least slight regret from someone, I was surprised to find that every single person who reached out to speak to me did so because they absolutely adore their hand and finger tats.

Lifestyle blogger Luisa-Christie has words tattooed on the sides of her hands, a little dot on every finger, and a leafy vine on her left pinky. ‘I love them!’ she says.

The words on the sides of her hands are ‘be kind’ and ‘love more’, which vegan Luisa-Christie says are to remind herself and hopefully prompt others ‘to be kinder to animals/the planet.’

She adds: ‘It’s also to remind myself to be gentle and practice self-love, as it’s so easy to be hard on ourselves – both our bodies and minds. So it’s a universal thing.

‘I got it a month or so before the #BeKind hashtag gained traction due to a famous person’s death – I’ve had a few questions asking if it’s to do with/because of that, but I don’t mind. It certainly extends into all areas of life and can be applied to almost anything.’

Chelsea, 30, has two finger tattoos so far and is planning to get one on each finger.

‘I love them and always get positive comments,’ she says, adding: ‘All my tattoos, current and planned, have meanings to me.’

Chelsea says she also just loves the way they look.

‘I read tarot, a practice that is very much hand and contact-based,’ she explains, ‘so I also like the idea of my tattoos on my fingers channelling that balance of light and dark energy and sense of self as I work.’

Lifestyle editor Ellen says that the tattoo she has on her finger is her favourite out of all the tattoos she has.

‘It gets the most compliments and I just love seeing it when I’m typing/holding a mug/doing anything with my hands,’ she shares.

What should you know before getting a hand or finger tattoo?

While tattoo stigma has gone down a lot overall in recent years, it’s important to keep in mind that there are still fields in which having visible tats could hurt your job prospects.

Tattoo apprentice Kolbi Alexis, who’s had the whole tops of her hands and full ‘finger sleeves’ done on all ten fingers, tells me: ‘People should consider the general stigma behind tattoos, but especially ones in highly visible places. Jobs still have dress codes that can and may include no visible tattoos.

‘Even if there isn’t a dress code, older generations might be presumptuous upon seeing them.’

‘I work as a creative, so it’s never going to affect my job prospects,’ says Kaye, who has three finger tattoos – a lightning bolt on her right pointer finger and a row of line arrows on each middle finger.

‘The lightning bolt is my favourite because I’m a photographer, and it’s on the finger I use to press the camera shutter,’ the 31-year-old explains.

‘The lines are ones all my cousins and I have, so it means something to us as a family.

‘We spoke about it shortly after our grandparents died and finally did it in like 2019.’

It’s not unusual for finger tattoos to fade faster than tats on other parts of your body, because, as Kolbi, who’s been an apprentice for one year, says, ‘we use our hands for everything.’

Sol agrees, saying the skin on certain parts of our hands is very thin and ‘in consistent contact with the outside world’, so the colour is more likely to fall out as it heals.

Therefore, it’s worth keeping in mind that you might have to go back for frequent touch-ups to keep your ink looking its best.

‘However,’ Kolbi adds, ‘everyone’s skin is different, and some people’s may fade sooner or way slower than average. If they fade, you can either let them fade out or touch them up. The primary “maintenance” comes with how well someone heals them.’

Ellen advises against going for anything ‘too dusty/faint’ because in time, you’ll just ‘end up with a faded mess’.

Choose the right artist for your hands

Sol says you should target your search for a tattooist that often does hands.

‘Their Instagram profile is a good point of reference,’ he advises.

‘Check that the artist offers free touch-ups,’ he adds. ‘Hand and finger tattoos can sometimes need an extra session to replace some of the pigment that may have fallen out.’

You’ll have to be very careful during the healing process

In Kaye’s case, one of her tats has faded in one spot because it didn’t heal correctly, but the others look just as good as the day she got them done.

Indeed, taking the utmost care during the healing process is an essential step to getting any tattoo. This can be tricky when it comes to our hands, which we use so much in daily life without a care in the world.

Cat-owner Ellen describes the aftercare as ‘a bit of faff’ because she was told she couldn’t pet any cats for a while. ‘But it’s held up really well, and I love it,’ she adds.

‘Your hands have to remain very, very clean and cannot be submerged in water during the healing process,’ says Kolbi, ‘so depending on one’s job, this may be unreasonable. I used to bartend when I got mine and had to take time off work to heal them due to not wanting alcohol in the open wounds.’

Sol says you can ask your artist to apply a ‘second skin’ (a see-through, breathable bandage) which can be left on for five days or so to protect the tattoo and allow it to develop a new layer of skin.

‘Once the bandage is removed (best done under running warm water),’ he adds, ‘rinse gently with lukewarm water and then dab dry. Apply a thin layer of coconut oil twice a day.

‘When it scabs, make sure not to pick it. This phase of the healing process once the bandage is removed is very important. For at least a week after, be sure to prevent the tattoo from rubbing against anything and continue to apply coconut oil.’

Kolbi says in no uncertain terms that hand and finger tats hurt more than your ‘average’ ink.

‘Your hands have a lot of nerves, and it can be very painful,’ she explains. The swelling is very intense. Finger tattoos – depending on the amount and area of coverage – are very painful and will constantly get bumped. The tops of the hands are painful, but the pain increases along the knuckles and intensifies towards the nail beds.

‘The palms are supposed to be one of the most painful areas to get tattooed due to the nerves there. These tend to fall out if they are not tattooed deeper than average.’

Ellen can attest to both the pain and the swelling, saying: ‘It hurt the worst for sure – and we had to keep taking breaks because my finger swelled up so much.’

However, this seems to differ from person to person too, as Chelsea tells me: ‘I would say it fingers don’t hurt more than anywhere else and because they tend to be small designs, it’s over very quickly.’

Kaye even went so far as to say that the pain ‘was non-existent.’

Kayla Jacobs, who managed a tattoo studio for four years and is now a tattoo apprentice, has extensive ink on both hands which she loves. She says her advice would simply be to think about your future body art plans before you go under the needle.

She got her fingers done before anything else on her hands, and one of the designs ended up ‘getting in the way’ of a new bigger tattoo she wanted later on.

‘When I finically decided to get the whole top done on both sides, I had tattoos to incorporate,’ Kayla explained, ‘which totally wasn’t a problem with what I had, and the artists did a great job, but I did have one artist turn it down initially because having an existing tattoo to incorporate made it more challenging.’

Even so, she says she has ‘no regrets’.

‘They’re some of my favourite tattoos that I have.’

A good rule of thumb for tattoos in general, the aforementioned fading dangers make applying a strong sunscreen to your hands extra important.

Sol says you should also keep your hands moisturised to have the best results long-term.

Only you can decide whether you think getting a hand tattoo is worth it, and there are lots of different factors to consider.

There are plenty of pros and cons but, given what I’ve learned about the process and the glowing chat from the people who’ve had it done, I’m definitely keeping the option on my list for mulling over.