The Mustangs are merging with the Wildcats and tensions are high – how can two such disparate cultures work together in harmony to kick balls and stuff? Also, the Mustangs have moved up to the A league, which is terrifying because let's face it, they're really not up to it. This is the third season of the show, so someone must be watching: for moderately-paced sporting action and female empowerment, this is the place to be. 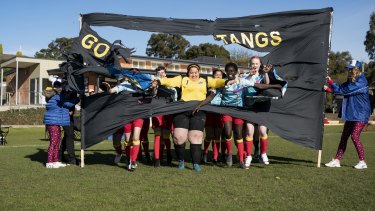 Itch is a smart, sensitive teenage boy who can't seem to fit in with the other kids – possibly because his name is Itch.

When Itch finds a mysterious radioactive rock, his life changes forever, in what could be a clever metaphor for puberty but also could just be a story about a boy and a rock. The rock turns out to be a new element, that could solve all the world's energy problems, and Itch is thrust into a world of adventure as he tries to keep his special rock out of nefarious hands.

Itch carries itself with that slightly awkward downmarket feel common to a lot of locally-made "young adult" programs, but it's a fun caper and deeply relatable for anyone who has ever discovered a warm rock.