Home » Lifestyle » ‘Where are you seeing that?’ Deregistration of UAP catches Palmer’s senator by surprise

‘Where are you seeing that?’ Deregistration of UAP catches Palmer’s senator by surprise

Mining magnate Clive Palmer has voluntarily deregistered his United Australia Party, rendering his sole senator, Ralph Babet, an independent on the crossbench, with the news of the party’s demise catching the politician by surprise.

Babet, dubbed Palmer’s “$100 million man” for being the sole beneficiary of the mining magnate’s federal election campaign, was seemingly unaware the party had been deregistered when contacted by The Sydney Morning Herald and The Age on Friday. 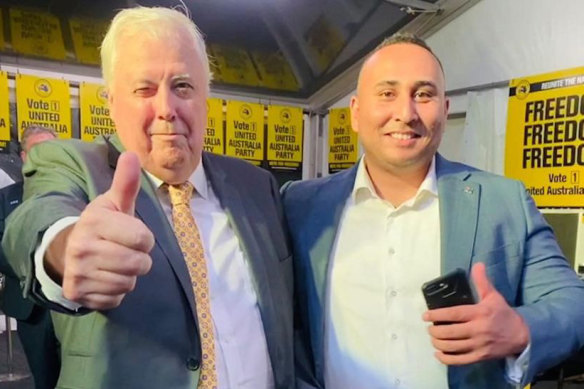 “Where are you seeing that? No, it has not been voluntarily deregistered,” the senator said in response to inquiries by this masthead.

A notice published by the Australian Electoral Commission said the UAP was “registered on 12 December 2018 and deregistered on 8 September 2022” and stated the reason as being “voluntary deregistration”.

When directed to this notice, Babet recalled the move had been flagged with him “a little while ago” but said he had been busy and “just completely forgot to put out a statement”.

“I did [know]. It was mentioned to me months and months ago, but because obviously, I’ve been very busy with everything that’s going on now with the Queen passing today it just escaped my mind,” Babet said.

He subsequently said the party had been deregistered for “administrative reasons” and claimed the UAP would be re-registered before the next election.

“This has actually happened before. We do it in between the elections to save on the administration, the party is not going anywhere. It’s staying right where it is. The UAP is here forever,” he said.

“Of course, myself being a parliamentary leader of [the] United Australia Party, we own the trademark, we will be immediately re-registered next time.”

But when pressed on the fact that the party no longer formally existed and he was now an independent, Babet said he considered himself to still be a member of the UAP.

“I don’t know what the technicalities are. But trademark-wise, I will still be calling myself a member of the United Australia Party,” he said.

Asked what the administrative reasons were for deregistering the party, Babet said only that the process of keeping a party registered was “very time intensive” and referred questions to the party’s head office.

Babet claimed the sixth Senate spot in Victoria at the May election and the UAP’s only seat, despite Palmer spending an estimated $100 million funding candidates in almost every lower house seat as well as most Senate races.