Home » Lifestyle » Who is Emmerdale’s Leanna Cavanagh actress Mimi Slinger? Here’s everything you need to know

Who is Emmerdale’s Leanna Cavanagh actress Mimi Slinger? Here’s everything you need to know 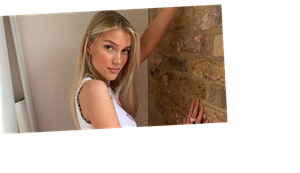 Leanna Cavanagh, played by Mimi Slinger, was the new girl on the scene when she joined Emmerdale in March 2018.

She was quick to find romance with Jacob Gallagher, played by Joe-Warren Plant, after they partnered together for a science project.

Then, last year, Leanna was embroiled in a teenage pregnancy scandal as she and Jacob slept together without protection.

There’s no doubt Leanna has made her impact on the Dales with some hard-hitting storylines, but who is the actress playing her? Let’s take a look…

Who is Mimi Slinger?

Mimi Slinger is a young actress who made her first television appearance in 2017.

According to IMDb, Mimi starred as Clara in the film Heidi: Queen of the Mountain and she’s also dabbled in theatre.

Mimi grew up in Singapore and then returned to the UK to study at Sylvia Young Theatre School in London.

Her stage debut came the she played Clara in 2014 playing Birgitta Von Trapp in The Sound of Music.

Mimi has shown off her impressive acting talents as Leanna in Emmerdale, but admits the character is a “troublemaker.”

Speaking to Digital Spy, the star said: “Unlike Leanna I was not a troublemaker but definitely could be a bit cheeky on occasion!

“Leanna and people like her would definitely be the sort that I’d steer away from. She’s someone I’d find it difficult to be friends with on some levels.

“She’s got a hard exterior because of everything she’s been through. That hard façade causes her to almost bully and disregard other people’s feelings too often.

“I personally couldn’t support this because I’ve experienced unkindness from bullies and I’ve seen its effects on others.”

Away from the soap, Mimi can be found sharing insights into her life on Instagram.

Mimi has 32,000 followers on the social media platform and she recently shared a photo of her birthday cake while thanking fans for their messages.

Mimi could be seen sitting with a sombrero on holding up a glass of bubbly, and she looked gorgeous in a black dress.

The stunning actress is fond of a selfie, and often shares snaps in glamorous outfits.

It is not known if Mimi is currently dating anyone, with the actress keeping her romantic life under wraps.