When actor Danielle Macdonald landed in Hollywood, she was profiled by the Hollywood trade publication Variety as a newcomer with rising-star potential. In that interview, she said she had not chosen Hollywood, but rather it had chosen her. “I had agents in Australia, I just never had any auditions,” she said.

The remark was innocent enough, but in hindsight it wasn’t just a powerful observation of the narrow view of casting directors in general, but also the specific hurdles young female actors face in Australia if they do not conform to the market’s expectations of size, or in other cases, race. 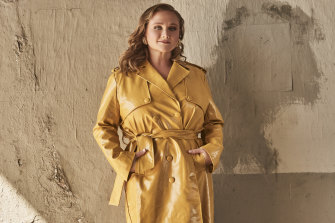 “I was very young, and this industry, it takes a while, but I did have agents for a couple years and I just never got an audition, not even one,” she says now.

“The industry was much smaller then, but the shows that were on, I was never going to be cast for Home and Away,” she says. It was an ironic casting footnote: the 30-year-old Sydney-born actor was raised in Avalon, just a few kilometres from Home and Away’s principal filming location at Palm Beach. “My sister is a lifesaver there. It was like, this is very much my world, but I don’t fit into the television version of it,” she tells Sunday Life.

So, barely past her 18th birthday, Danielle packed her bags and headed to Hollywood. “It felt to me like America was the centre point of the global industry, because the majority of what we watched in Australia was American,” she recalls. “I had been to America to do acting workshops and casting directors would say, you should be out here, there’s opportunity here.”

And opportunity there was. In 2017, Danielle broke through with the film Patti Cake$, directed by Geremy Jasper, playing a rapper. The following year she starred in the film Dumplin’, directed by Anne Fletcher, about a young girl who grows up in the shadow of the beauty pageant industry.

Between then and now there were Susanne Bier’s post-apocalyptic horror thriller Bird Box; Unjoo Moon’s critically acclaimed Helen Reddy biopic I Am Woman, and, most recently, French Exit, in which she co-stars with Michelle Pfeiffer. And now comes Falling for Figaro, a quirky romantic comedy about Millie, a busy corporate executive who gives up everything to pursue her dream of becoming an opera singer.

Directed by Ben Lewin, Falling for Figaro stars Joanna Lumley as Millie’s thunderously cruel opera teacher Meghan Geoffrey-Bishop; Shazad Latif – Toast of London’s gorgeously brilliant Clem Fandango – as her boyfriend Charlie, and Hugh Skinner (The Windsors) as Max, a browbeaten opera also-ran under the tutelage of Geoffrey-Bishop, who may turn out to be the key to Millie’s opera ambitions.

What is extraordinary about the life of Danielle Macdonald, however, is that all of this might never have come to pass. When she landed in Hollywood back in her late teens, she had in her back pocket something few actors get straight out of the gate: a network sitcom deal that came with a six-year contract. But as fate – or luck – would have it, she landed well ahead of her own visa paperwork and the comedy, Huge, proceeded without her.

Set adrift in Hollywood, Danielle ended up taking parts in independent films, a slightly bumpier slice of the business where the risks are greater but the rewards can be immense. Her first film, The East, was produced by Ridley Scott and starred Brit Marling and Alexander Skarsgård. She did Every Secret Thing with Dakota Fanning and Elizabeth Banks, and Dumplin’, with Jennifer Aniston.

“You have to believe that some things are out of your control, because otherwise you’re going to nitpick everything,” Danielle says, at home in Los Angeles and surrounded by a small tribe of animals who seem keen to share the spotlight of our interview.

“You also have to believe that you have some control, otherwise you’re going to get lost in it all,” she adds.

“I think that there’s both [fate and luck]. I think that you have to work as hard as you can and be as ready for the opportunities that come up as you can.

“The money would’ve been really handy those first few years in LA,” she adds, laughing. “The experience would’ve been amazing too, because the first time I went on set, I was like, ‘I’ve never been on a set before. What do I do?’ There were so many things that it would’ve been helpful for, but
I also knew that my path was going to be different. And that’s just how it is.”

Born and raised in Sydney, Danielle spent her afternoons and weekends at the Australian Institute for Performing Arts in Naremburn.

“I honestly don’t know what got me there,” Danielle says. “I was a weird mix of liking performing but very shy at the same time. We always played make-believe games growing up. My next door neighbour went there, she did it for a year and I ended up going as well. I was in a different class, so I didn’t know anyone, and I didn’t speak to anyone for a year.”

Danielle then auditioned for a stage production of Hating Alison Ashley and won the part of Margeart Collins, the 14-year-old optimist of Barringa East High’s class 9c. (“Someone called her
a bimbo to her face once, but Margeart thought it was a compliment in Italian and just smiled and said thank you,” according to the play’s liner notes.) 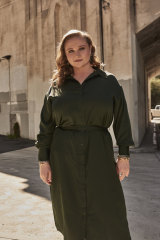 “She was a funny character, and I fell in love with that play and I fell in love with performing,” Danielle says. “And then my teacher said, ‘Now we know you can talk, you have to start talking.’ It opened me up enough to make friends and gave me confidence. After that, things became easier. I was more relaxed [interacting in character] than I was interacting as myself.”

Mercifully, Danielle was spared an acting teacher with Meghan Geoffrey-Bishop’s brutality. But she did have acting teachers who turned the class into a form of therapy. “It was almost like, we’re going to go to the darkest place,” Danielle recalls. “Now that I think back, I’m like, did that help me? I don’t know. Maybe it did.

“It’s funny, because people do push you to go to some really interesting dark places, which could be triggers for some,” she adds. “But that’s where it’s fascinating. Luckily, I’ve always had very good, open, kind teachers, and have always enjoyed the experience. But it’s interesting when they go, ‘We have to get you to your lowest point, until you suffer, so you can get there when it comes time to perform.’ That’s so messed up when you think about it.”

Danielle says she loves romantic comedies but was uncertain she was right for the part of Millie. “Rom-coms make me so happy. They just do. I’ve definitely been interested in doing one and butt I never pictured myself as the lead of one. So, when I was reading the script I didn’t picture myself doing it at all, which is an unusual feeling.”

“Rom-coms make me so happy. They just do. I’ve definitely been interested in doing one and butt I never pictured myself as the lead of one. So, when I was reading the script I didn’t picture myself doing it at all, which is an unusual feeling.”

Danielle says she was initially unsure about the involvement of Lumley, best known as Bolly-swilling fashionista Patsy Stone in the British TV comedy classic Absolutely Fabulous. “I knew she was already attached to Falling for Figaro,” Danielle says. “One thing I’ve learnt is not to have a preconceived notion of people because the moment you meet them, they become human. And it’s all about energy and connection. So I went in with the mentality of ‘let’s see what happens’.”

But when she met Lumley, Danielle says, she was not let down. “She’s incredible. She’s truly just a really, really good human being, very caring, very funny, very engaging and very warm and welcoming “She just brings something else to the table. It’s so beautiful to watch.”

The finished film is beautifully light, but also something of a tonic for the times. “I watched it with my roommates and I hadn’t seen them that happy in a really long time,” Danielle says. “They’re Americans, so I wasn’t sure how it would play to them. It’s got a very British-Australian tone to it, and I knew it would probably find its home more easily there. But they were just in hysterics. It was such a good vibe. It was exactly what they needed at that time. That made me so happy.”

Falling For Figaro is currently playing in the British Film Festival, Presented by Palace Cinemas. In Cinemas February 24, 2022.