With lyrics like ‘you’ve been lying on my name,’ fans believe Joshua Bassett’s emotional ballad ‘Only a Matter of Time’ was inspired by drama involving his ‘HSMTMTS’ co-star, Olivia Rodrigo.

“Look me in the eyes, tell me you’re not lying to me,” Joshua Bassett sings at the start of his new song, “Only a Matter of Time.” Thanks to these emotionally laden lyrics and more, fans now believe the song is a response to his High School Musical: The Musical: The Series co-star, Olivia Rodrigo. The Disney star dropped the track on Jan. 28, three weeks after Olivia released her breakup ballad “Driver’s License,” which fans have speculated is about an alleged love triangle between Olivia, 17, Joshua, 20, and fellow Disney star Sabrina Carpenter, 21 (no one has ever confirmed that they’ve dated one another, however).

The rest of Joshua’s new song is just as intense. “Time to tell the world that you’ve been lying on my name / Doing what you want and think you’re gonna get away / Well, I’ll leave it up to faith for now,” Joshua sings in the first verse. The chorus gets even more heated: “But it’s only a matter of time / An eye for an eye you’ll go blind / When did you stop being kind? / You twisted your words like a knife / Well I’m sure that your hurting inside / But why would you make your pain minе? / You’re making me pay me for your crimеs / Well darling I’ll be fine.” 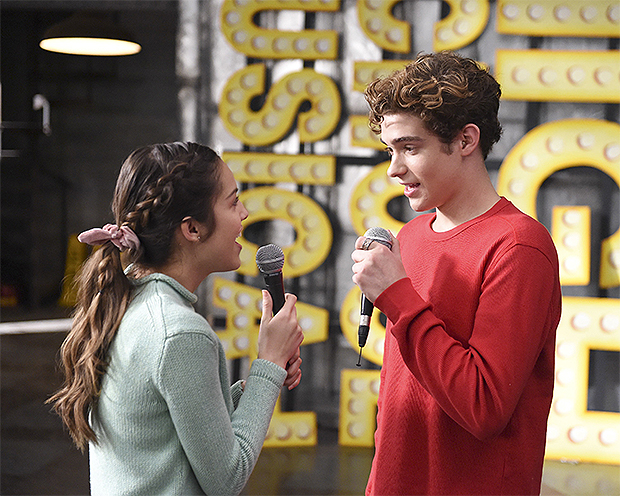 While Joshua, Olivia and Sabrina have all gone out of their way to prove that there’s no drama — for example, Joshua recently gave supporting shout-outs to both Olivia and Sabrina’s new music — fans still wondered if his new song was about Olivia. “Listening to Joshua Basset’s new song Only a Matter of Time and it’s literally about Olivia [laughing emoji] What the f-ck am i doing with getting involved with the relationships of people who are years younger than me,” one fan tweeted, and another fan was on the same page: “In other news, Joshua Bassett’s new song is definitely about Olivia Rodrigo??”

The speculation continued! “Not joshua bassett’s new song let olivia live in PEACE og my god,” another fan tweeted, believing that “Only a Matter of Time” was inspired by the recent drama. Meanwhile, a different listener wrote, “So far Joshua’s response to Olivia’s track has been an attack on her character and the constant ‘You’re a liar’ on both the tracks he has released. Interesting, although exhausting. Just spit it out and be done with.”

Despite the many theories, the HSMTMTS star clarified that he wrote “Only a Matter of Time” long BEFORE the drama over “Driver’s License.” In an Instagram Story post after the new song’s release, Joshua wrote, “I wrote this song in the summer of 2020 in a moment in time where social media was bringing a lot of darkness to my life. It was healing to put my phone down, turn off the noise and just write. There’s good that comes from social media, but it’s also become a place where people can say anything about anyone, no matter how false or damaging with no accountability. We’ve gotta be much kinder to each other and recognize there are real people behind the screens!”

This also echoed a similar statement that Joshua put out after the release of his other recent single, “Lie Lie Lie.” Like “Only a Matter of Time,” fans wondered if the track was about the drama regarding Olivia, thanks to some very blunt lyrics. However, Joshua clarified in an Instagram Story post earlier this month, “I wrote ‘Lie, Lie, Lie’ after I found out a friend had been lying about me behind my back for a long time. It always sucks to hear that someone you thought you could trust would throw you under the bus when it benefits them. It happens to all of us, and I think all you can do is seek out people that build you up rather than tear you down.”

Joshua’s not the only person who’s had to do some clarifying about his songs’ question-raising lyrics! Like Joshua, fans believed that Sabrina had also supposedly clapped back at Olivia with a song of her own, called “Skin,” on Jan. 22. Although fans thought Sabrina had called out Olivia over her “that blonde girl” lyric in “Driver’s License,” Sabrina set the record straight.

“I wasn’t bothered by a few lines in a (magnificent) song and wrote a diss track about it,” the Girl Meets World alum wrote in the Instagram post above, adding, “The song isn’t calling out one single person. Some lines address a specific situation, while other lines address plenty of other experiences I’ve had this past year. It also shows that many things have actually gotten under my skin.. and I’m still learning to not give other people so much power over my feelings.”