Size 14 mother is left ‘hurt’ after husband tells her she’s ‘let herself go’ because she’s ‘in her PJs until noon’, doesn’t wear make up and has put on weight – but some admit they’d find it ‘hugely unattractive’

A woman has divided opinion after revealing her husband is annoyed she has ‘let herself go’.

The mother, who was a size 10 when they married and is now a size 14, took to Mumsnet to explain that her husband had ‘blurted out’ that he doesn’t ‘understand what’s wrong’ with her.

She added: ‘[He said] that I’ve massively let myself go and that I don’t look anything like the woman he married. He’s right I know, which is awful.’

Some users were shocked by his words and branded him ‘cruel’ while others agreed with him saying they would also tell their significant other if they felt their appearance was slipping. 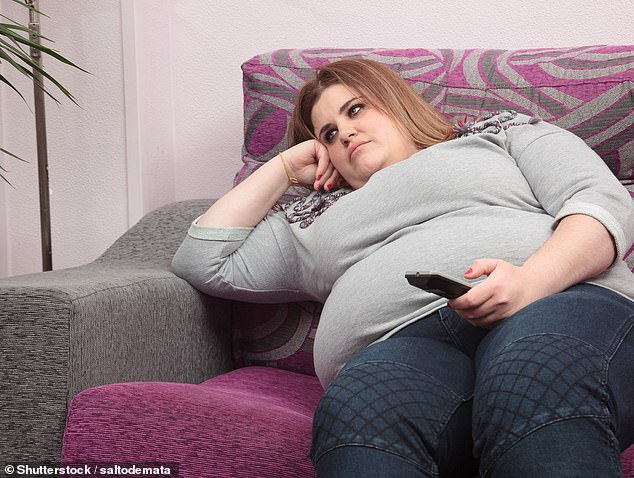 The mother, who was a size 10 when they married and is now a size 14, took to Mumsnet to explain that her husband had ‘blurted out’ that he doesn’t ‘understand what’s wrong’ with her and thinks he’s let herself go (stock image) 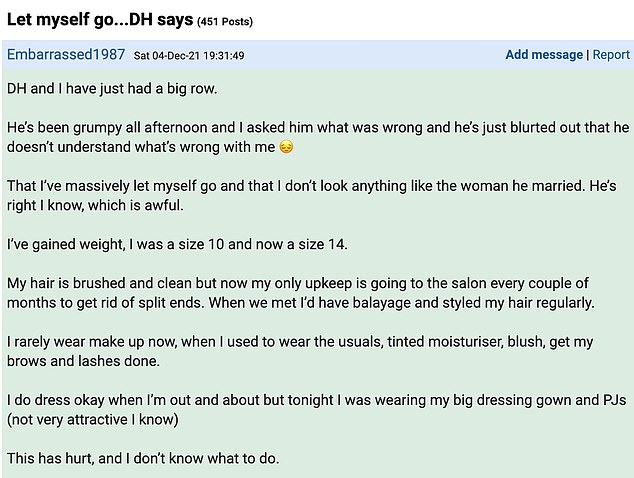 The woman explained that she takes care of their two-year-old child and works part-time, and that when she’s at home she’s sometimes ‘in PJs until noon’.

She continued: ‘My hair is brushed and clean but now my only upkeep is going to the salon every couple of months to get rid of split ends. When we met I’d have balayage and styled my hair regularly.

‘I rarely wear make up now, when I used to wear the usuals, tinted moisturiser, blush, get my brows and lashes done.

‘I do dress okay when I’m out and about but tonight I was wearing my big dressing gown and PJs (not very attractive I know). This has hurt, and I don’t know what to do.

She added: ‘I just don’t have the same time that I used to, we have a daughter who is 2 and she takes up a huge amount of time.

‘So much so that some days I’m still in PJs at noon on the days she’s not at nursery (I work 3 days a week) and am a SAHM [stay at home mother] when not working.

‘I would like to lose weight, and I do dress nicely when we go out, do hair and makeup etc) but that’s not often at the moment!’

Some commenters felt that her husband has the right to tell her if he is no longer happy with how she looks because physical attraction is an important part of a relationship.

One person said: ‘I do think it’s important to continue to put effort into your appearance into a marriage, for me, the sexual attraction has to be there.

‘I wouldn’t be happy if my husband gained a lot of weight and let himself go. I would broach the subject sensitively and kindly though. I hope he’d do the same for me.’

Another thought that being undressed was a certain turn-off, saying: ‘…why are you not getting dressed when you have a 2 year old to look after? 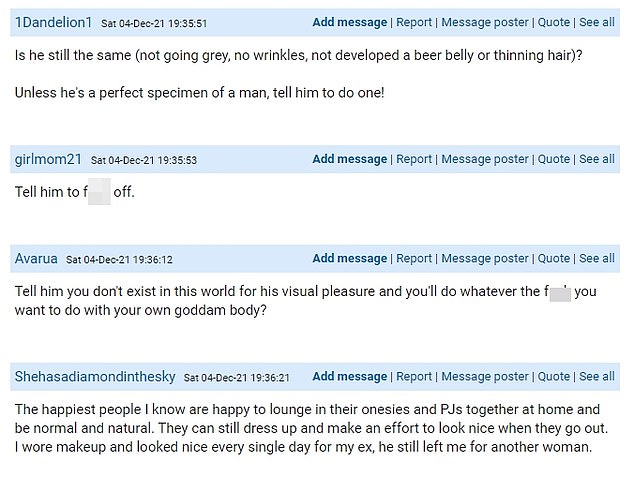 ‘I don’t dispute that looking after small children can take a massive amount of time, but not so much that you cannot throw some clothes on before midday.’

While a third person wrote: ‘Attraction does matter – if you’ve gained a lot of weight and spend most days in PJs, if I’m being honest I sort of understand where he is coming from.’

Others, however, thought the husband’s comments were cruel and unnecessary, and he should love her no matter what she looks like.

One person said: ‘Tell him you don’t exist in this world for his visual pleasure and you’ll do whatever the f**k you want to do with your own goddam body?’

While another thought double standards were at play, saying: ‘Is he still the same (not going grey, no wrinkles, not developed a beer belly or thinning hair)?

‘Unless he’s a perfect specimen of a man, tell him to do one!’

A third person was sympathetic to how upset it made her, writing: ‘This is awful to read. I’d be devastated if my DH said this to me.

‘Surely it’s part and parcel of growing older together and being comfortable with each other.’