Most of Australia including NSW and Victoria can expect a milder-than-average winter with the odds favouring more rain than usual at least for June.

The Bureau of Meteorology’s winter outlook, released on Thursday, provides hope for farmers in some regions of the country’s south that have missed out on the usual so-called autumn break rainfall. Temperatures, though, are likely to be warmer than average, particularly at nights. 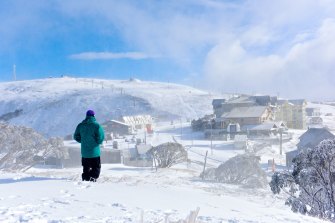 A wintry blast brought snow to the Alps including Mt Hotham earlier in May, and lowered temperatures over much of southern Australia. Credit:Chris Hocking

“It’s the northern parts of Victoria and west of the ranges for NSW that have the strongest signal for above-average rains,” Naomi Benger, a bureau climatologist, said. “For coastal regions, the signal is more neutral.”

Among the drivers for the above-average rain is the warmer-than-average sea-surface temperatures off north-western Western Australia. Such conditions are typically conducive to feeding extra moisture into the atmosphere that will make its way across central Australia and into the east, Dr Benger said.

While NSW had its second wettest March on record behind only that month in 1956, conditions turned sharply drier in April with average rainfall sinking to about one-quarter the norm.

Victoria, too, went from a slightly wetter-than-normal March to a much drier April, with places such as Mildura Airport in the state’s north-west recording an empty rain gauge for the month.

“There are still a lot of regions waiting for their autumn-break rain,” Dr Benger said, with South Australia and Victoria featuring prominently.

Most of Australia has had its coolest autumn since 2015, including inland NSW, where temperatures have been running as much as two degrees below the seasonal norm.

However, those relatively brisk conditions of late, particularly at night, should make way for milder weather for both nights and days. Both Sydney and Melbourne are likely be warmer than usual for the June-August period.

Predicting how the snow season will play out is tricky as it only needs a couple of decent dumps for the mountains to get a good base. However, warmer-than-usual temperatures, combined with odds favouring wetter-than-average rainfall, could see snow melt or be washed away early.

The period from autumn into winter tends to be harder for climate models to predict than other parts of the year.

For now, two of the main drivers of Australia’s weather (the Pacific and the Indian Ocean) are in a neutral mode.

The southern annular mode that tracks changes in the Southern Ocean has lately been in its negative phase, a status that tends to produce more or stronger storms and low-pressure systems of the like that southern Australia has experienced lately. This influence, too, is expected to return to a neutral phase soon, Dr Benger said.

Australia’s temperatures have risen by about 1.4 degrees since 1910, following a pattern seen in most parts of the world as the global climate warms.

Meanwhile, the World Meteorological Organisation says there is now about a 40 per cent chance that average annual global temperatures will top 1.5 degrees in at least one of the coming five years.

There is a 90 per cent likelihood of at least one year between 2021-2025 becoming the warmest on record, which would dislodge 2016 from the top ranking, according to the Global Annual to Decadal Climate Update, produced by the United Kingdom’s Met Office.