With Dawn FM, The Weeknd remains the reigning pop star for our chaotic end times

If the blog-hype success of his woozy indie breakthrough, 2011’s House of Balloons, heralded a unique talent, few might’ve anticipated he’d go on to create some of the darkest, most nihilistic, pop hits of the past decade: songs full of oversexed self-loathing, numb from too much partying, empty hook-ups, paranoid drugs, and despicable fame. 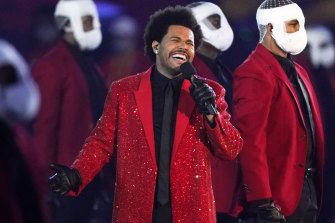 The Weeknd during his Super Bowl performance last February. The singer has just released his new album Dawn FM.Credit:AP

The monster success of 2015 album Beauty Behind the Madness′ chart-topping singles, The Hills (with its pitiful catch-cry, “When I’m f—ed up, that’s the real me”, perhaps the darkest #1 in recent memory) and Can’t Feel My Face (which won him a Nickelodeon Kid’s Choice Award despite being about “a face numbing off a bag of blow”, as he memorably put it on Starboy’s Reminder), still feels like a cosmic gag. His unapologetic sleaze, playing like a skeezy mix between Michael Jackson and R. Kelly (what a combo), resulted in the kind of music that warranted a shower post-listening, lest the morning-after haze linger in your brain.

And yet, Tesfaye’s dedication to the conceit – night-time music, in its basest sense – has proven a useful muse. With its ice-cold sonic palette – including co-productions from Max Martin, Metro Boomin and Oneohtrix Point Never – his last album, 2020’s After Hours, was his most cohesive pop tilt yet, earning him his best reviews since his debut. Songs like Heartless and Faith (“If I OD, I want you to OD right beside me”) took the loathsome post-superstar shtick to new heights (well, or depths), while others expanded his wink-wink persona (I mean, “Futuristic sex, give her Philip K Dick,” from Snowchild, can’t not make me giggle). 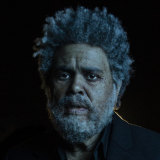 The Weeknd, on the cover of Dawn FM.

Amid the early pandemic, the album’s Blinding Lights became the most popular song both in Australia and the world (it topped year-end charts globally at the end of 2020), and culminated in last February’s Super Bowl halftime show – an unexpected mainstream triumph for an artist who essentially sings songs about cocaine depression. Regardless of the infamous Grammys snub, the album cycle cemented The Weeknd as pop’s reigning dark prince and perhaps the most appropriate pop star for our chaotic end times.

So where to next? Dawn FM, his fifth album – released on Friday and introduced online with a clip of a young Weeknd beating an old, greying Weeknd to a bloody pulp before returning to the dancefloor – might be more grandly existential, but it’s a logical follow-up to After Hours′ coked-up, synth excess. At least, its best parts are; the rest is characteristically uneven.

While After Hours’ red suit and bloody bandages are gone, the infatuation for overworked concepts remains. Last November, Tesfaye suggested Dawn FM represented a car radio station playing in purgatory as you’re “waiting to reach the light at the end of the tunnel”. Oddly enough, fellow Canuck Jim Carrey (yes, that one – they’re old friends, “telescope bros”) plays our emcee, imploring us to “walk into the light and accept your fate with open arms. Scared? Don’t worry.”

Don’t think too many people will be scared by the radio-ready Scandi-funk of Max Martin and Swedish House Mafia’s Sacrifice, or the odd interlude featuring Quincy Jones recalling his mum being taken away in a straightjacket. The slinky Out of Time, sampling Japanese city pop icon Tomoko Aran, points to an interesting departure but again seems tonally out of place among the darker soundscapes that hit hardest.

Gasoline is more like it, finding Tesfaye affecting a British post-punk sneer and revelling in his nihilistic tendencies with morbid death fantasies straight out of a Smiths song. The ’80s mopers are also evoked in the gorgeously jangly Less Than Zero, with its singalong chorus that’d make you want to pack your back pockets full of gladioli.

How Do I Make You Love Me? is another drug-addled love song (“I fix you mushroom tea and cross the restless sea”), with the sort of massive ’80s driving synths you might find on a Nicolas Winding Refn soundtrack, and it segues magically into the skittering Goblin-esque horror synths and syncopated disco drums of the album’s first single, Take My Breath.

If you think everything’s looking good, you haven’t heard a Weeknd album. The requisite filler comes with a warning, at least, with Carrey’s DJ alerting us that some “easy listening” is coming our way. By the time you hit Every Angel is Terrifying, an ’80s VHS trailer for a fictional straight-to-video movie titled Afterlife (or, you know, heaven), you’re either onboard with Tesfaye’s goofy ambition or ready to return to reality.

By this point, we know The Weeknd’s not an “album artist”, and Dawn FM has its highlights. As ever, just add the best bits to your streaming “Weeknd playlist” and there’s an apocalyptic soundtrack you can’t deny.