A TikTok user stunned her followers by making a cake that looks exactly like a dirty dish sponge — and then taking a big bite of it.

Abi, a 20-year-old amateur baker, shared footage of herself munching on the shockingly realistic-looking cake before giving a behind-the-scenes look at how it was made.

Sitting on the counter, the green and yellow cakes look just like two soapy dish sponges, and most viewers admitted that they thought they were being pranked. 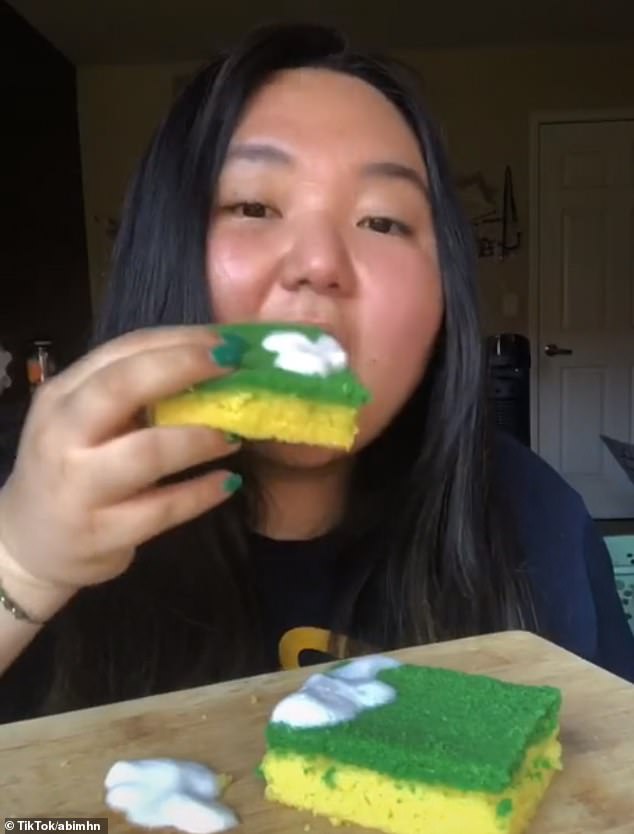 Made you look! Abi, a 20-year-old amateur baker, shared footage of herself munching on the cake that looked just like a dirty dish sponge 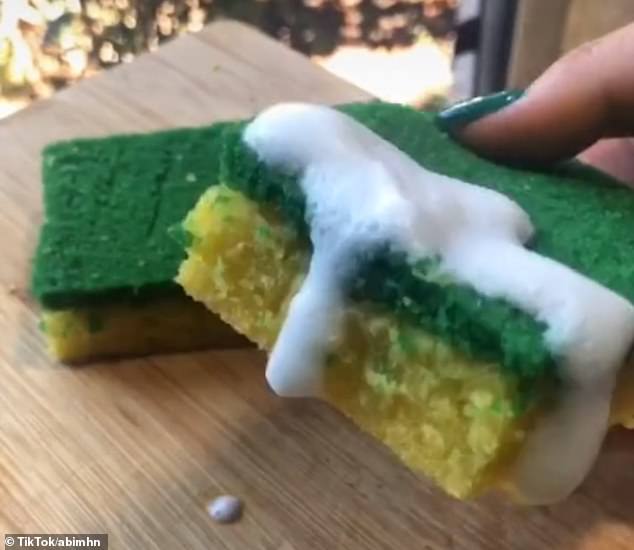 Too real: The square yellow and green cakes were even topped with fake ‘soap’

‘Today I’m going to show you how to make sponge cake. I’ve been seeing it a lot on YouTube and TikTok, so I really wanted to try it out,’ she explained at the start of the clip.

Abi began by mixing melted butter, oil, and sugar into a large bowl. She then beat in three eggs, milk, and lemon zest for flavor.

‘I used lemon zest, but you can use whatever you want,’ she noted.

She went on to sift in the flour, baking powder, and salt, mixing them into the batter until it was smooth.

‘Now you are going to separate it into two parts, one a little bit less than the other,’ she said while pouring the batter into two smaller bowls.

She added green food coloring to the smaller batch to make it the color of the scouring pad that sits on top of the sponge.

For the smaller batch, she added a little drop of brown food coloring ‘to give it that realistic sponge color.’

She poured the batter into two separate pants and baked for about 15 minutes. Once the cakes were cool, she trimmed off the tops with a serrated knife and cut them into squares to make them look like sponges.

Abi drizzled lemon curd over her two yellow sponge cakes. The mixture served as an adhesive for the thing layer of green cake that sat on top of the completed cakes.

She topped off the sponges with ‘soap’ made from under-whipped egg whites and sugar. 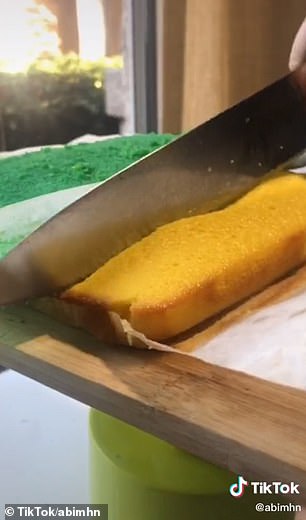 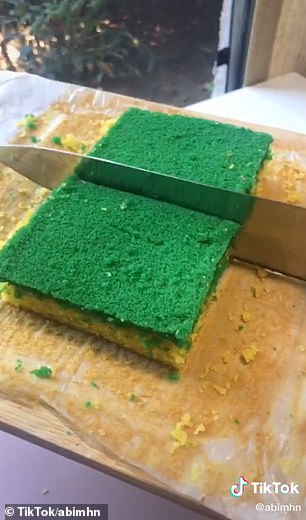 Tada! After she baked the cakes and let them cool, she trimmed off the tops with a serrated knife and cut them into squares to make them look like sponges. 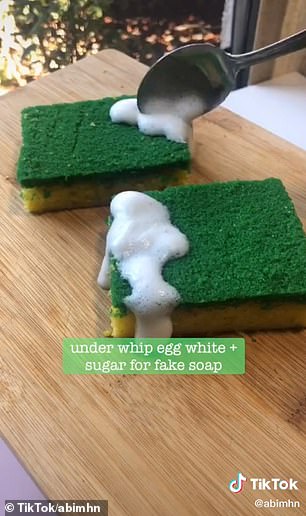 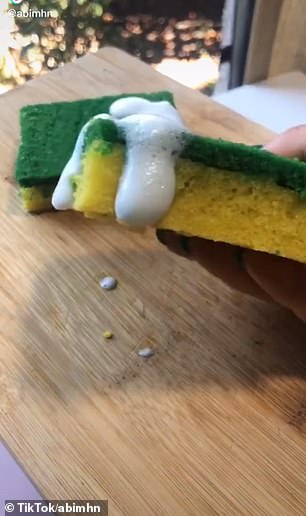 Added touch: Abi topped off the sponges with ‘soap’ made from under-whipped egg whites and sugar

Fooled: The video has been viewed more than 2.2 million times, and many people admitted that they thought she was eating an actual dish sponge

‘Do you eat your sponges with or without soap???’ she captioned the clip, which has been viewed more than 2.2 million times.

‘This looked so real! Damnnnnnn,’ one fan wrote.

‘At first I thought this was gonna be a joke post, but then YOU BIT INTO IT AND I FREAKED OUT,’ another added.

Many admitted that she was really eating a sponge, with some referencing the reality series My Strange Addiction, which has featured people who have eaten household items such as glass and toilet paper.

‘My first thought was “oh man it’s one of the strange addiction episodes”…lol,’ one fan commented.

In a large bowl, mix the melted butter, oil, and sugar with a whisk until well combined.

Beat in the three eggs, one at a time, and the stir in the milk.

Mix in your flavoring, if using. (Abi used lemon zest)

Sift in the flour, baking powder, and salt. Mix until combined.

Bake for 15 to 20 minutes in the preheated oven.

Let the cakes cool before trimming.

Using a serrated knife, cut the tops of the cakes, and then cut them to the shape and size of two dish sponges.

Coat the top of the cut-out yellow cake with something sweet such as honey to serve as an adhesive. (Abi used lemon curd)

Place a thin layer of the green cake on top of the yellow cake to make it look like a dish sponge.

Under-whip egg whites and sugar together to create fake dish soap to drizzle on top.