Woman who drinks Epsom salts and olive oil to ‘detox’ her liver claims it has transformed her health, and helped to treat hypothyroidism and gallstones – despite doctors warning ‘dangerous’ trend causes severe medical issues

A woman is preaching about the benefits of drinking salt and olive oil, insisting that the concoction has treated a myriad of health issues – despite doctors warning that the ‘dangerous’ trend could cause serious medical problems, from diarrhoea to high blood pressure.

Stephanie Owens from Nashville, Tennessee, has been ingesting an unusual cocktail of various salts and oils over three months as part of a self-proclaimed ‘liver detox’.

She claims that drinking salt has helped her with a number of health issues; including food allergies, leaky gut and hypothyroidism – which resulted in constant stomach aches, indigestion and a persistent itchy rash. Stephanie also believes that the salt water has helped to clear up her skin. 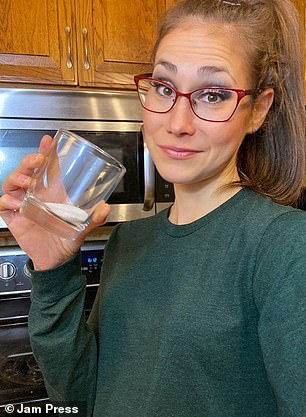 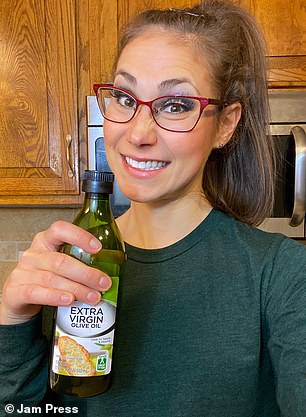 Bottoms up… Country singer Stephanie Owens claims that drinking Epsom salts, salt water, and olive oil has helped to cure a myriad of health issues, from hypothyroidism to allergies 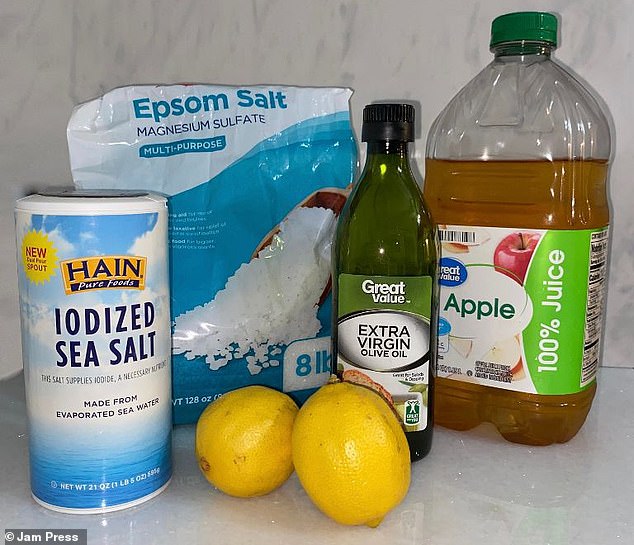 Delicious? The Nashville native does a 24-hour ‘liver detox’ every month, which sees her fasting while ingesting salt water, Epsom salt water, olive oil and lemon juice, and apple juice

The country music artist was inspired to do the salt cleanse after a visit to her local naturopath showed that she had high levels of toxins in her liver.

‘I have celiac disease and at the end of 2019 I visited my naturopathic doctor for a check-up,’ Stephanie told Jam Press. 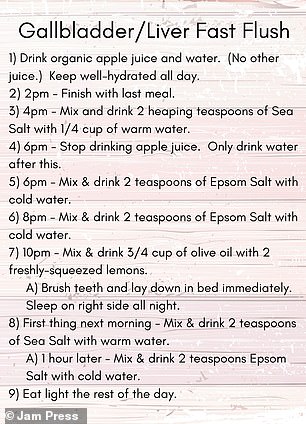 Complicated: Stephanie says her cleanse doesn’t always make you feel great, admitting that ‘it’s basically like giving yourself the flu’

‘She ran a scan on my body that showed that I had a lot of toxins in my liver, so she recommended that I do a gallbladder and liver flush.

‘This involves drinking a ton of salt, Epsom salts and olive oil to help cleanse the liver and help with some of the symptoms I was experiencing.’

Stephanie did the cleanse three times, spaced out over three to four weeks between each round.

However, the singer admitted it was difficult choosing a weekend to cleanse as she stayed indoors due to the side effects.

Stephanie said: ‘You don’t feel the best during the cleanse – it’s basically like giving yourself the flu for 24 hours.

‘I fast, drink a lot of water, apple juice, sea salt, Epsom salts and olive oil, with the fasting starting on the first day.

‘I either eat lightly up until 2pm the day of the cleanse or fast the entire day, which I found helped my system respond better since there was less that my body had to then get rid of.’

Throughout the day, Stephanie drinks a combination of sea salt with water and Epsom salts with water.

She claims the salts help the gallbladder and bile ducts open up and relax so that the gallstones and ‘sludge’ will expel naturally.

She said: ‘You also drink apple juice to help soften the gallstones and make them easier to pass.

‘The Epsom salts (magnesium sulfate) act as a strong laxative, so I find that fasting all day makes this cleanse more manageable.

‘At night, I drink a large amount of olive oil mixed with freshly-squeezed lemon juice and then immediately go to bed and sleep on my right side all night.

‘Drinking oil essentially causes your gallbladder and liver to dump all contents into the bile duct.

‘The next morning, I drink a couple more rounds of the salts, and then the laxative effects really kick in – I start feeling better late morning and then can begin eating again.’

While Stephanie admits the salt concoction tastes ‘pretty gross’, she claims it has been beneficial to her and alleviated some health problems.

She said: ‘My stomach aches improved significantly after doing the cleanses, and that was such a huge relief for me. 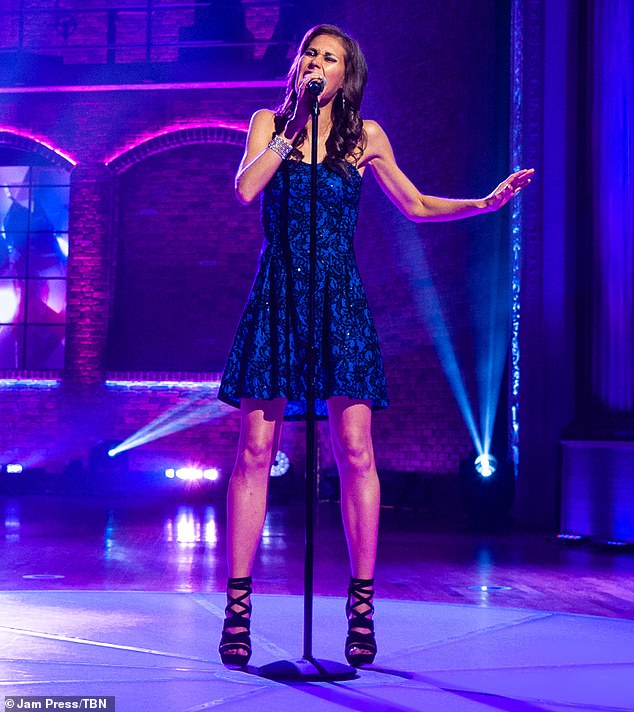 Warning: The singer admits that the Epsom salts have a laxative effect, which means she cannot make any plans during the 24 hours she is doing the cleanse 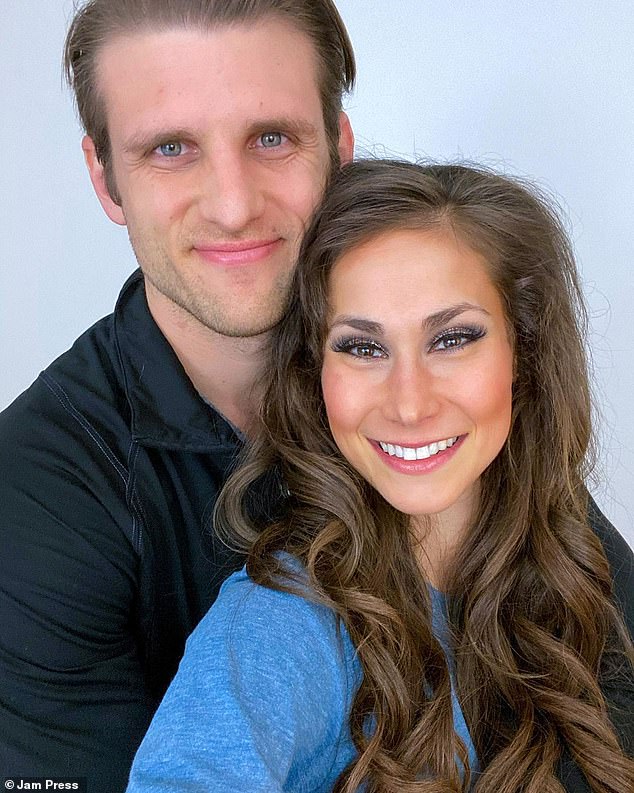 Sacrifice: Stephanie, seen with her husband Chris, admits the salt concoction tastes ‘pretty gross’, but insists it has been beneficial to her and alleviated some health problems 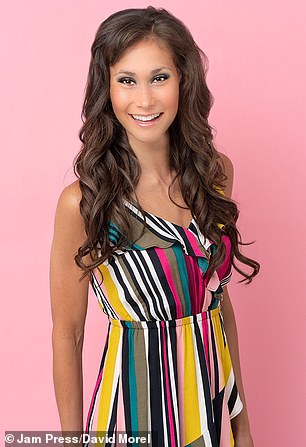 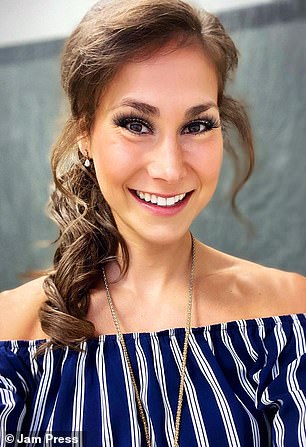 Goals: ‘I really believe this cleanse was a necessary step on the path to wellness,’ she added

‘I had gotten to the point where I was having indigestion after almost every dinner, and I know the cleanses had something to do with alleviating that and I had improvements in bloating as well.’

Stephanie claims the persistent rash on her calf has also cleared up and is yet to return.

She added: ‘I’m in the process of healing additional hypothyroidism symptoms and detoxing your liver is something that has to be done in order to expedite the healing process, so I really believe this cleanse was a necessary step on the path to wellness.’

While drinking olive oil and Epsom salts in small doses can be a remedy in some cases for digestive problems, they are laxatives and should be used with extreme caution.

It is advised that you consult your doctor, or another medical professional before changing your diet.

‘I would never recommend that people drink salt water – this can increase the risk of high blood pressure and sodium overload,’ Dr Sarah Jarvis, doctor and clinical director of patientaccess.com, told Jam Press.

‘There is no way that a naturopath can reliably make a diagnosis of “high toxins in the liver”. In fact, the liver is constantly processing and removing toxins from your body.

‘This advice is at best, completely without any evidence base and useless and at worst, potentially dangerous.’