‘I thank God every day that I don’t have his child’: Woman whose ex-boyfriend purposefully poked a hole in a condom to get her PREGNANT and ‘lock her in’ at age 17 shares her shocking abortion story in the wake of Alabama bill

A woman has shared her distressing experience of having an abortion in the wake of Alabama lawmakers passing a bill that bans nearly all abortions, including those in rape and incest cases.

Taking to Twitter, a woman named Brie, from Michigan, revealed that when she was just 17 years of age her boyfriend at the time ‘poked a hole into his condom’ without her knowing. As a result, Brie, who lives in the U.S., became pregnant.

Brie revealed that her boyfriend, who ended up threatening her with violence and stalking her, had intentionally wanted to ‘lock’ her in because he wanted to spend the rest of his live with her. 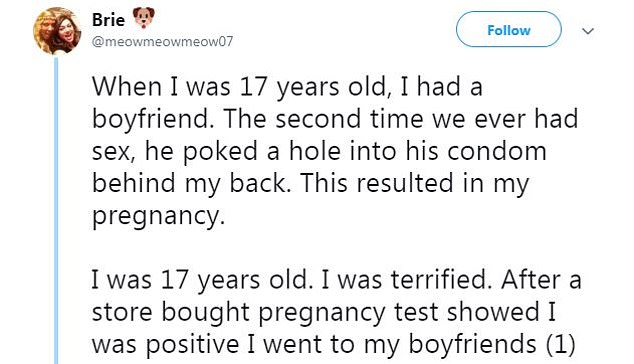 Emotional: A Twitter user named Brie took to the social media platform on Wednesday, May 15, to share her personal experience of having an abortion when she was just 17 years of age 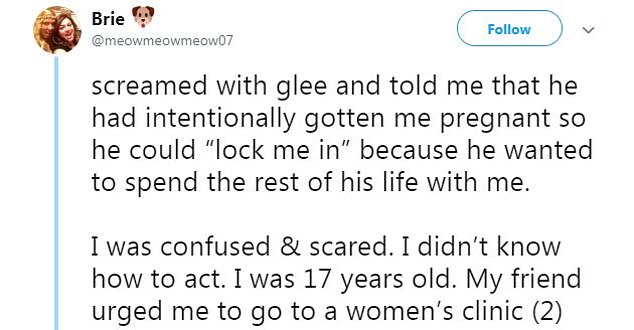 Traumatic: She said he intentionally poked a hole in a condom to get her pregnant in order to ‘lock’ her in as he said he wanted to be with her for the rest of his life 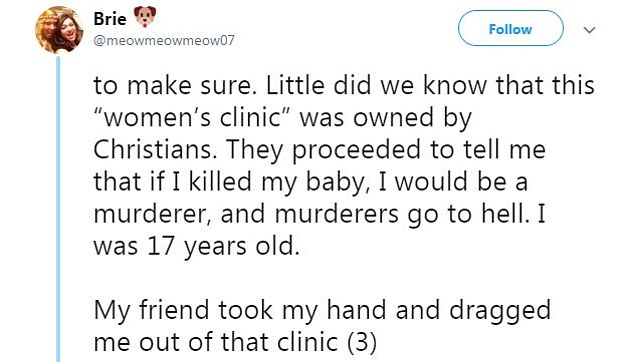 Scared: Brie decided she wanted to get an abortion, so she and a friend went to a ‘women’s clinic’, where Christian workers told her she would ‘go to hell’ if she had the procedure

Her tweets read: ‘When I was 17 years old, I had a boyfriend. The second time we ever had sex, he poked a hole into his condom behind my back. This resulted in my pregnancy.

‘I was 17 years old. I was terrified. After a store bought pregnancy test showed I was positive I went to my boyfriends. 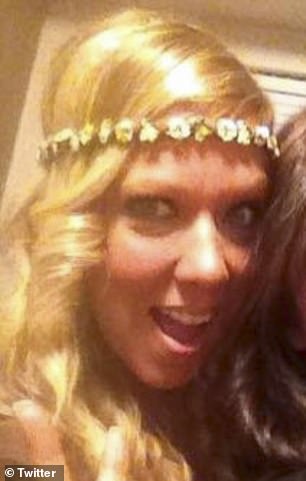 Frightened: Brie (pictured) said she was scared and confused as she was just 17 years of age

‘[He] screamed with glee and told me that he had intentionally gotten me pregnant so he could “lock me in” because he wanted to spend the rest of his life with me,’ she added.

Brie said, at the time, she felt confused and scared, and she didn’t know how to react to the situation at such a young age.

A friend of hers urged her to go to a women’s clinic, so she decided to go.

Brie said: ‘Little did we know that this “women’s clinic” was owned by Christians. They proceeded to tell me that if I killed my baby, I would be a murderer, and murderers go to hell.

‘I was 17 years old. My friend took my hand and dragged me out of that clinic,’ she said.

Brie explained that, in order for her to get an abortion as a 17-year-old without parental consent, she had to be granted her rights to an abortion.

She would only be granted the rights to an abortion as long as she wasn’t using it as an alternative to birth control, she said.

Luckily, Brie was granted her rights.

Brie continued: ‘I took the day off of school and my friend drove me to the abortion clinic. This procedure took all of 5 minutes.

‘There was no baby to remove and dismantle. There wasn’t even a fetus. It was an embryo that took 5 minutes and no blood shed to remove.

‘I went home and through confusion, a lot of tears and pure support from my friend, I tried to continue on with my 17 year old life,’ she added.

Brie said that shortly after the procedure, she decided to break up with her boyfriend. As a result, he threatened her with a knife, however, he self-harmed instead as he told Brie if he couldn’t have her, he didn’t want to live.

‘My parents who found out about my abortion and what he had done to me banned him from my house. For 10 years after, he stalked me.

‘He showed up at my work. He knew how to get my new cell phone number I constantly had to change because of him,’ she said.

Her boyfriend was eventually arrested for stalking Brie, which resulted in him finally leaving her alone.

‘I thank God everyday that I don’t have his child. That he wasn’t allowed to “lock me in.” He is a psychopath and I would hate myself if I had brought an actual living and breathing child into this world with him as their father,’ she said.

‘I believe he would have killed u,’ she added.

Danger: He was eventually arrested for stalking Brie, who says she is grateful every day that she doesn’t have his child, as she called him a ‘psychopath’ 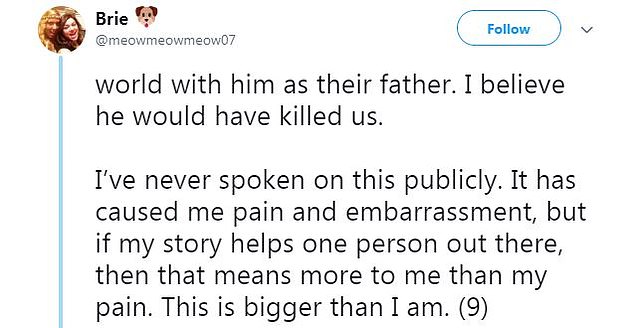 Pain: Brie said she thinks if she had the man’s child, he would have killed she and the baby. She added that she had never spoken out publicly about the traumatic incident before

Awareness: She concluded her viral thread, saying she stands with women in Ohio, Georgia and Alabama, and that she will fight for their rights

Brie explained that she had never spoken about her abortion publicly before, as she said is caused her ‘pain’ and ’embarrassment’/

She said the reason she decided to share her emotional story is in case it helps ‘one person out there’. 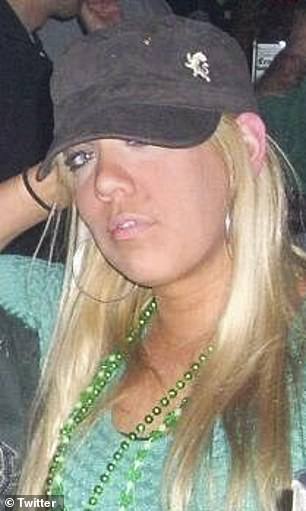 Concern: Brie’s (pictured) decision to share her story comes just a few days after Alabama lawmakers passed a bill banning nearly all abortions, including those in rape and incest cases

‘This is bigger than I am,’ she said.

Brie’s decision to share her abortion story comes just a few days after Alabama lawmakers passed a bill on Tuesday banning nearly all abortions, including those in rape and incest cases.

Under the bill, which is the nation’s strictest abortion bill, the only exceptions are to safeguard the health of the mother.

Georgia signed into law Tuesday a so-called heartbeat bill to outlaw abortion after a fetal heartbeat is detectable, which is typically around the six week mark.

Brie added: ‘I’ve never spoken on this publicly. It has caused me pain and embarrassment, but if my story helps one person out there, then that means more to me than my pain. This is bigger than I am.

‘To the girls and women in Ohio, Georgia and Alabama and more states to come, I am with you.

‘I will never stop fighting for your rights as a HUMAN. Stay strong and never be ashamed of who you are and what you do with your own body,’ she added.

Praise: Since she shared her story on Twitter, it has accumulated hundreds of comments from different people praising her for being so open and honest about the traumatic experience

Since she shared her personal story on Twitter, her post has received over 150,000 likes and almost 100,000 retweets.

Similarly, it has accumulated hundreds of comments as users praised Brie for being so open and honest about the traumatic experience.

One user said: ‘Thank you for sharing your experience, that took some incredible bravery and you (and all women) deserve better from us men.’

Others praised Brie’s unnamed friend for sticking by her side through the experience, as one user said: ‘Hats off to your friend who was with you the whole way. Some people don’t have those sorta people by [their] side.’

‘I love you so much. And I’m so sorry you had to go through everything you had, at such a young age, another said.

She added: ‘I’m glad he’s gone and I’m glad that you are safe. We appreciate your bravery and support.’