Home » Sport » 2017 All-Ireland semi-final: Galway edge Tipperary in a clash for the ages

2017 All-Ireland semi-final: Galway edge Tipperary in a clash for the ages In this week’s edition of our classic games series, we look back on the 2017 All-Ireland semi-final when Galway edged Tipperary in a classic.

The two sides were meeting for the fourth consecutive summer, with Tipp winning in the 2014 qualifiers and the 2016 All-Ireland semi-final, while the Tribesmen pipped them in a pulsating contest at the penultimate stage in 2015.

Their most recent and undoubtedly most significant meeting coming into the 2017 championship was the National League final in April of that year. Up to that point, Michael Ryan’s charges were cruising as reigning All-Ireland champions. However, all changed utterly in the league decider in the Gaelic Grounds, as they were hammered by a superior Galway outfit, 3-21 to 0-14.

The ripples of that defeat clearly lingered, and the Premier County were then stunned by Cork in the Munster opener. Nonetheless, little-by-little they regrouped, and found themselves in the final four after wins over Westmeath, Dublin and Clare.

Galway meanwhile used the National League title as a springboard for a successful provincial campaign, as they beat Dublin, Offaly and Wexford to win their first Leinster title since 2012. 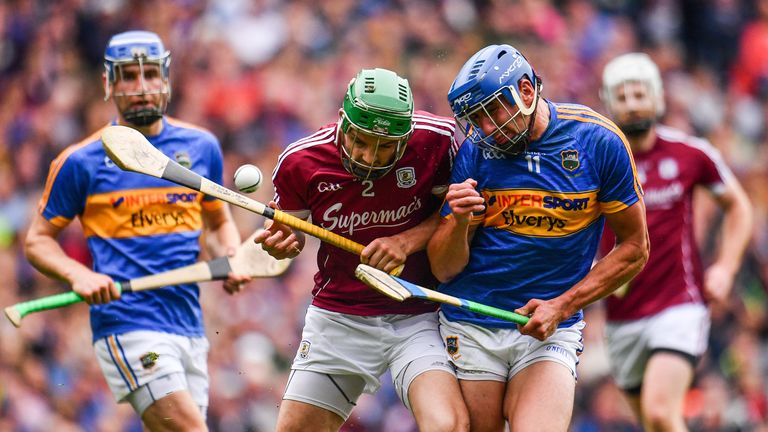 The sides went tit-for-tat throughout a nail-biter of a game. Tipp took an early three-point lead but were quickly reeled in. A John McGrath goal saw the reigning All-Ireland champs regain the lead, as they went in 1-10 to 0-12 ahead at the break.

The second-half saw the momentum swing back and forth, with neither side able to establish a commanding lead.

The clock ticked on into injury time, and a mammoth Brendan Maher free pulled Tipp level after 72 minutes. Seemingly, the tie was headed for a replay.

However, there was to be one final twist. Joe Canning took on an ambitious point-attempt from a free inside his own 45. It dropped short, and the Tipp defence managed to clear it out their left wing. Johnny Coen collected the ball, before running into a dead end. Turning back, he spotted Canning who had made up impressive ground since taking the free.

The Portumna star didn’t have much time or space, but managed to dispatch the ball over the Hill 16 bar and send the Tribesmen into the All-Ireland final.

“The last three years, there’s only been a point in it,” match-winner Canning said in his post-match interview with Sky Sports. “The league wasn’t a fair reflection on either team earlier on the year. It went our way in 2015, theirs last year, and just us by a point today.

“Both teams are physical and well-matched. We both play the same brand of hurling.

“The last three semi-finals have been unreal, for the spectators especially.”

“The winning score from Joe Canning. I just couldn’t believe my eyes,” said Tipp boss Michael Ryan at full time. “How many times has he done that? But yet he did it again.

“It’s a great sign of a really, really good team. Galway are an outstanding team, we congratulate them.”

“Such an epic encounter, it was just down to raw hard work and honesty,” added Micheál Donoghue.