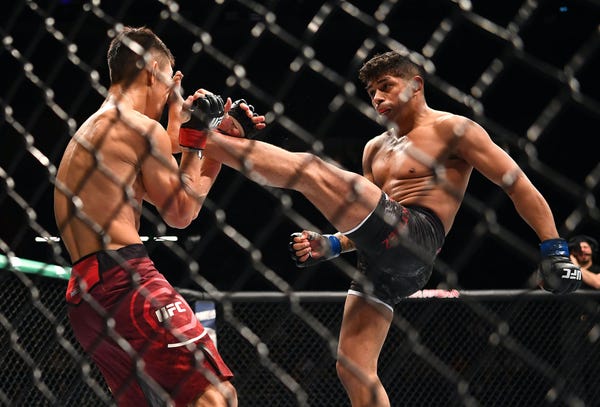 When reporters asked Jonathan Martinez about the rumor that he has been all too happy to scrap at a moment's notice, he appeared bashful, looked down at his hands, and laughed nervously.

It was a contrast in reaction to the ways Masvidal and Kimbo loved to talk about their achievements in backyard brawls many years ago.

At a media day inside the UFC bubble, Martinez said the rumor is true.

"I used to fight a lot when I was in school and stuff so I just used to pick fights," he said. "Not really pick fights, but if I felt a guy thought he was tough, I'd say to my friends, 'Hey, tell him I want to fight him.'

He said that there was never any money involved, that he was "really good out there," and that he quickly discovered the toughest-looking guys never seemed to want to fight.

"I was always fighting the bigger guys," he said, noting that there were some fights he might be getting beaten up for 20 minutes but he'd still never back down.

Martinez said one fight which stood out was when he hadn't ever really drilled kicks, but threw a kick at one guy's face. "I dropped the guy and after that everyone started knowing me at school."

It was noted by one reporter that the perception of street-fighters like Masvidal who has a brash and confident persona, is at odds with Martinez, considering his introverted nature. But Martinez said it was what led him toward mixed martial arts.

Martinez, a Texan, is a blue belt in Brazilian jiu jitsu but has won a number of his contests through strikes. He has fought five times in the UFC, including a third round knockout over Frankie Saenz in August.

Martinez fights Thomas Almeida in a featherweight match on Saturday on the main card of the UFC Fight Island 6 event in the behind-closed-doors Flash Forum venue on Yas Island.

He told the press Wednesday that we will likely see him try and force a street-fight rather than an MMA contest against Almeida.