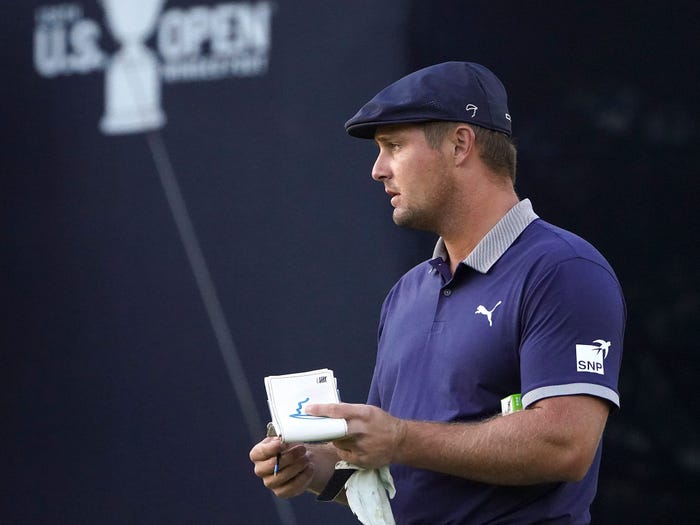 Bryson DeChambeau looks set to dominate at the 2020 Masters.

After packing on pounds of muscle and returning to Tour with the biggest swing in all of golf, DeChambeau has been over-powering courses with his newfound abilities, including winning the U.S. Open by a remarkable six strokes.

DeChambeau's bombing drives are likely to be an even bigger advantage for him this weekend at Augusta National. As ESPN's Nick Pietruszkiewicz broke down in detail, several of the fairway hazards that make Augusta National such a difficult test for the best golfers in the world simply won't apply to DeChambeau given his distance off the tee.

But while DeChambeau's drives give him a distinct advantage over the field heading into the Masters this year, a quirk in the rules of Augusta National may work against him on the greens.

At the Masters, unlike other tournaments on tour, players aren't given detailed green-reading books to help navigate the treacherous putting surfaces of Augusta National. Instead, players are left to rely on their own experience on the course and build on what they've learned.

While this rule applies to all golfers equally, it's possible that it could affect DeChambeau more than the rest of the field, as he is notoriously meticulous while planning his putts. Dubbed "the mad scientist" early in his playing days, DeChambeau is known for taking time to map out each of his shots, especially on the green.

"Absolutely, it's a lot harder," DeChambeau said on Tuesday. "But growing up in college, we didn't have greens books, and I played well then. I've played well here the last couple years and gotten pretty comfortable with the greens.

"It'll be a lot more time spent on the greens these next few days … So I'll do a really detailed practice around that on each and every hole location over the next couple days."

But while having the extra data is certainly a tool that DeChambeau makes good use of in other tournaments, he also admitted that putting with his gut is still a part of the game.

"At the end of the day, I still go based off of my intuition most of the time. I look at something, OK, I think it looks a little like this. The times where I've putted best have been where my intuition is matched up with reality, and what it's actually doing because sometimes (the greens books) can be wrong."

DeChambeau is a fine putter with or without a guide to the greens — at his win at the U.S. Open, he led the field with the flat stick — and having played the Masters three times in his young career already, he'll already have plenty of information heading into the tournament about how they'll play.

Still, to win the green jacket, you have to be sharp in all aspects of your game for four straight days. DeChambeau is expected to be dominant with his driver. If he can get his putter working as well, the tournament is his for the taking.