Aaron Rodgers is ‘hell-bent on revenge’ against Packers: TJ Lang 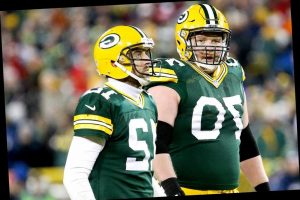 The Aaron Rodgers trade drama has hit a wall

Aaron Rodgers: ‘That was me’ in viral beer video

How Aaron Rodgers ‘silenced the douchebags’ with podcast

Amid a roller-coaster start to the offseason in which speculation about Rodgers’ frustration with the Packers has gone through various levels of concern, a former teammate has now chimed in and thrown more gas on the fire.

Former Packers offensive lineman T.J. Lang, who is close with Rodgers, appeared on 97.1 FM “The Ticket” in Detroit on Monday, and said that Rodgers is “hell-bent on some revenge” against Green Bay ownership.

“I think he was quietly pissed when they took [Utah State quarterback] Jordan Love a year ago,” Lang said. “The one thing I’ll say about Aaron Rodgers, pretty much the last 10 years of his career he’s wanted that team to just go all-in for one year. ‘Just give me some pieces, let’s just go all-in, let’s trade a future first if we have to get a couple guys. Let’s just go all-in and try to win this thing.’

“And then last year, he hinted at them doing that, ‘Hey, I’m excited, let’s see who they can bring in,’ and they bring in a quarterback. I think that was the ultimate slap to the face when you feel like you’re one piece away from winning the whole thing.”

The Packers famously traded up in the first round of the 2020 NFL Draft to select Love, despite having Rodgers under contract and having a notable need at wide receiver alongside All-Pro Davante Adams. Green Bay still finished 13-3 and made it back to the NFC Championship Game, but lost to the Buccaneers.

Rodgers said his future in Green Bay may be “uncertain” in a postgame press conference, leading some to think the Packers could move on from Rodgers and turn to Love in 2021. However, both head coach Matt LaFleur and general manager Brian Gutekunst have maintained that they have no interest in trading Rodgers. According to reports, they refused to make him available to the Rams, who wound up trading for Matthew Stafford.

Still, it’s more evidence that not all is well in Packer land.