AOC says Winter Olympians must be backed regardless of boycott stance

The Chef de Mission for the Australia’s Winter Olympic team in Beijing, Geoff Lipshut, says government officials must continue to publicly back the nation’s athletes regardless of whether a diplomatic boycott comes into effect.

The controversy around Beijing’s hosting of the February Games has continued to intensify amid concerns for the safety of tennis star Peng Shuai, who accused former Chinese vice-premier Zhang Gaoli of sexual assault then went missing for a number of weeks.

A dubious email supposedly assuring the world of her safety only amplified international concerns, before the former doubles world No.1 and triple-Olympian appeared on a series of scripted videos and in a call with International Olympic Committee (IOC) president Thomas Bach, which was in turn savaged as staged and complicit in whitewashing potential human rights offences.

Now Australia has reportedly joined countries including the USA and United Kingdom in discussing a diplomatic boycott of the event, which would mean athletes would attend but no official representatives.

Federal sports minister Richard Colbeck said a decision had yet to be finalised but given no Australian minister has entered China in more than two years, the matter appears to be a formality.

That would potentially leave the athlete body in the firing line for critics like independent senator Rex Patrick, who has already called for a full-scale boycott of the Games. Lipshut said both sides of politics had already endorsed Australia sending a team and that should not change if a diplomatic boycott took place. 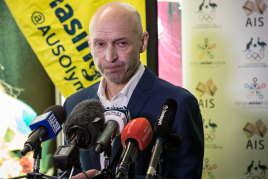 “On any diplomatic boycott, I don’t think it affects the athletes too much. The Australian government supports our team going to Beijing, as does the opposition. I think we’re in pretty good shape to try and get the best team we can there to compete at the Olympic Games,” Lipshut said.

“I think the world has moved on from the sporting boycott. If there are countries talking about a diplomatic boycott, then they are perfectly entitled to talk about that. But the athletes aren’t talking about that at all.

“If the debate does then spread to involve the athlete, then they don’t deserve to carry that burden. They will be in China simply to do their very best when they get their opportunity to compete at an Olympic Games.”

Few appear to be in favour of an athlete boycott of the Games, as was the case in Moscow in 1980, where many of Australia’s athletes were treated as pariahs for competing under an Olympic flag. Sebastian Coe, the head of World Athletics, has described the notion as a ‘meaningless gesture’.

That leaves open the option of protest on the ground in China, with athletes allowed to spread their message within the IOC’s new guidelines that came into play in Tokyo. That excludes the podium but includes the field of play before competition, during interviews, press conferences and through traditional and social media.

Lipshut said Australia’s athletes had been well-educated in the IOC rules and he encouraged them to have a voice on important issues if they felt the need to speak out. He also said they needed to respect the IOC constraints and the host nation.

“Athletes can have their own voice. That is clear and we encourage athletes to have a voice. But I would remind everyone that we have to be respectful of our hosts, we are guests in China, so there are appropriate times and places. That’s up to each athlete,” Lipshut said.

“There has been a number of sessions educating the athletes. That has all been made really, really clear. And we are open to anything any of the athletes want to talk about.”