I grew up in London as an Arsenal fan but, when I joined Leeds, I immersed myself in the history and the culture of the club, and since then it has been hard to support another team.

So there is only one side I will be rooting for on Monday, and I know exactly what it will mean to the Leeds fans if they can get past the Gunners, because I have helped them pull off a famous FA Cup win myself.

It does not feel like it, but it is 10 years since Leeds went to Old Trafford in the third round and I scored the winner against Manchester United in one of biggest shocks the competition has seen.

We were a League One team, and Sir Alex Ferguson’s side were the Premier League champions and had never gone out of the FA Cup in round three or lost in the competition to lower-division opposition during his long reign.

I still remember Sir Alex’s reaction afterwards. A lot of the Leeds players, including myself, had family who were Manchester United fans so, as we were all walking off the pitch at the final whistle, we asked some of their players for their shirts

They all said fine, let’s do it in the tunnel, but then Sir Alex came along, with a face like thunder and said “no-one is giving any shirts to anyone – everyone in the changing room, now”.

At the time, I remember thinking he was a bit out of order but then you remember the rivalry between the two clubs and the fact he had just been embarrassed by us at their own ground, and I can understand why he was so angry.

We didn’t see their players again but I have never really been bothered about not having a memento of the day. Being able to look back and enjoy that moment has always meant far more to me than a shirt.

‘Someone can be our hero’ 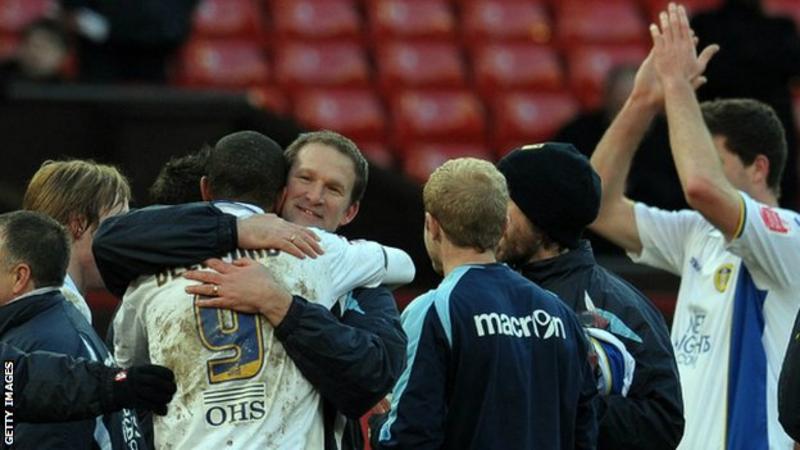 No-one outside of Leeds gave us a chance against Manchester United but the weird thing was we had absolutely no fear going into that game, even though we had not even got past non-league Kettering in round two when the draw was made.

We came within 12 minutes of what would have been a humiliating defeat before I scored a late equaliser in the first game, and even needed extra time to get past them at Elland Road in the replay.

Kettering had treated both ties against us as a cup final and gave absolutely everything, but we were used to it because every game in League One that season was like that too – we were the giants, the club everyone wanted to beat.

Against Manchester United, it was different. Their team was full of big names such as Wayne Rooney, Dimitar Berbatov and Gary Neville, but I felt when we lined up against them beforehand and looked them in the eye, they were not as focused as we were.

We had a togetherness in that Leeds team that few teams could match and our manager, Simon Grayson, gave us all a brilliant team-talk before we went out.

He said that, if we won, we would be remembered forever in the club’s folklore. He asked us to give everything and told us not to have any regrets, and kept on saying that someone could be a hero.

I guess I took what he said pretty personally, didn’t I? 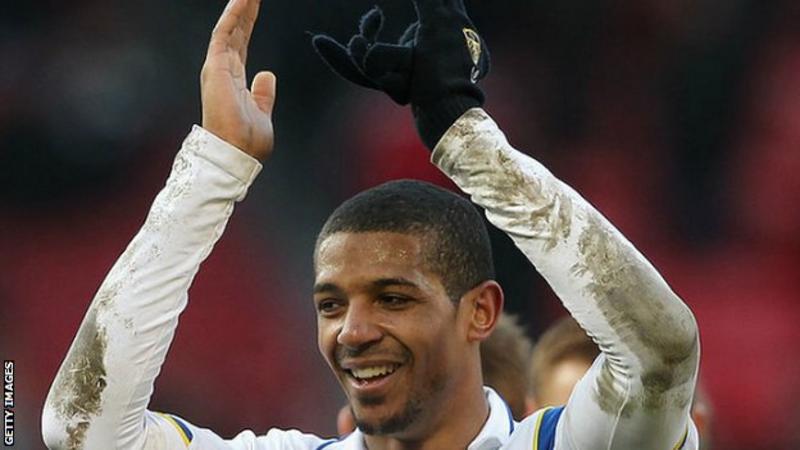 My winner that day is one of those moments that will stay with me forever and is probably the most famous goal of my whole career, but it was actually very similar to quite a few others I got that season.

I always preyed on the last defender’s shoulder because I knew that I had the pace to get away from anyone, and I also knew that if any of our players got the ball in our defensive third, their first thought would be to try to find me.

That is exactly what happened at Old Trafford. Jonny Howson got on the ball from a Manchester United free-kick and I knew his range of passing was brilliant so I just started running, and pulled off Wes Brown’s shoulder.

I stole a couple of yards off him and knew then that I was in a foot race I was not going to lose.

I still had to deal with the ball of course, and as it was dropping in front of me I was caught in two minds whether to take a big touch to control it or let it run across my body.

In the end, the ball almost ran from me but it worked out because it drew the keeper and, well, my second touch wasn’t bad, was it? 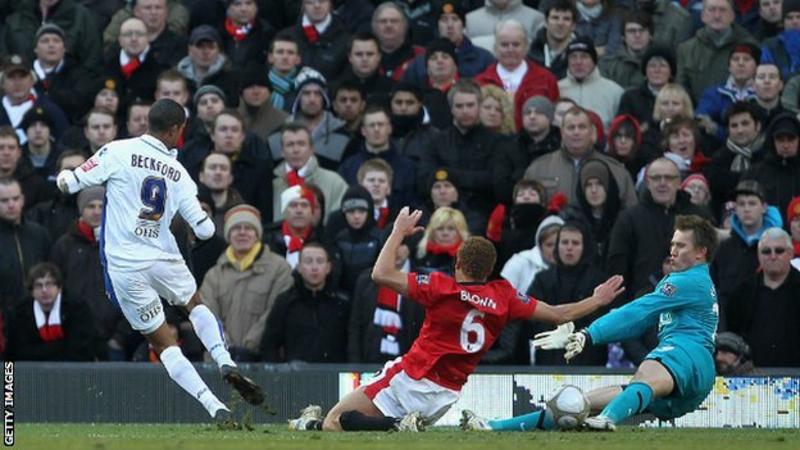 I’ve got to be honest, at first I thought I’d missed it. On TV it appears to go straight in but from the moment I connected with it, it looked to me like it was going to go wide.

It took a while to actually cross the line and creep into the corner but in the end it was perfect, just perfect.

I did not really know how to celebrate though – as you can probably tell if you watch it back now.

It was a huge moment for me, for lots of reasons. My dad was a Manchester United fan, and he was somewhere in the ground that day – I didn’t know exactly where.

He was absolutely ecstatic for me that I had scored at Old Trafford, but admitted afterwards that he still had half a moment where he thought ‘hang on a minute, Manchester United are going out’. 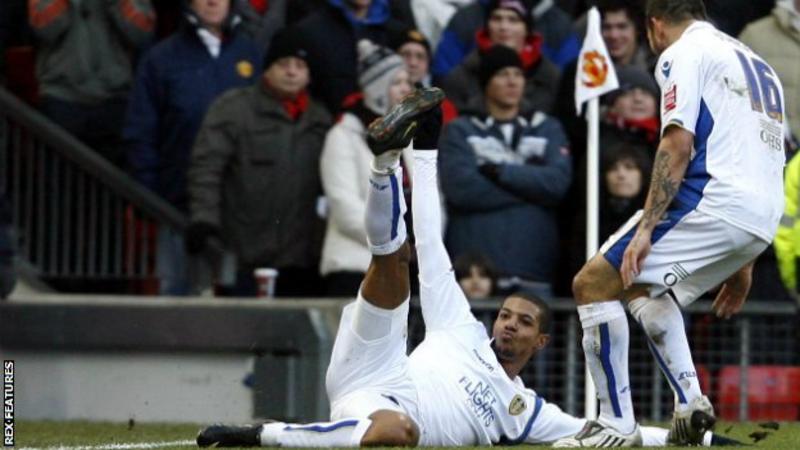 Good times on their way back for Leeds fans

As well as our win and my goal, the other thing that stands out for me from that day is the memory of our fans.

There were 9,000 of them at the opposite end of the stadium to where I scored and the eruption I heard when the ball went in gave me a feeling like I had never had before in football. It was an absolutely phenomenal noise.

Our fans had been incredible right from the beginning of the game – you could hear them in the tunnel as we were about to walk out and although they were outnumbered, they were never going to be out-sung. 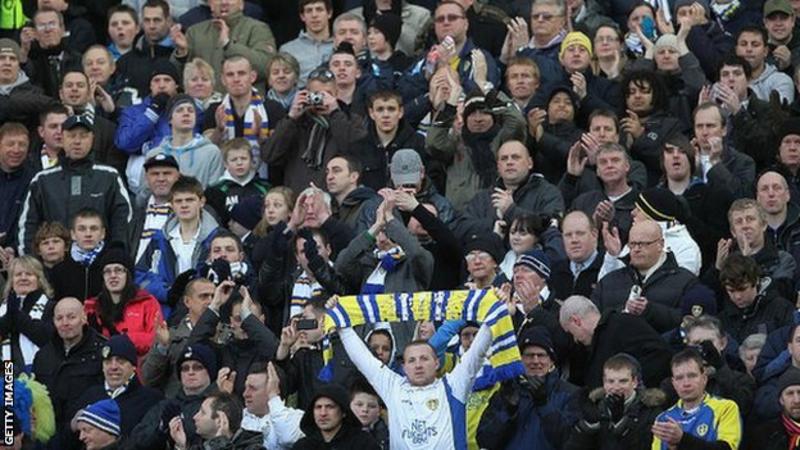 The support we had at Old Trafford was part of the magic of the day. They were so loud, it felt like we were back at Elland Road and it helped us show we meant business and were there for a reason, not just to play for pride and avoid a heavy defeat.

It had been the same when I had spoken to our fans beforehand too – they made it clear about the rivalry between the two clubs and how much it would mean to them if we won. I am so pleased we did.

That is what the Leeds supporters were like all the way through my time at the club.

Home and away they were always there, however the team were doing and whoever the opposition were – and it will be the same at Emirates Stadium on Monday.

They have had to put up with a lot of disappointment in recent years but these are exciting times for the club. What they really want is to be back in the big time for good, not just for a one-off cup game, and I am confident that will happen soon.

Why Arsenal cannot afford to let their intensity slip 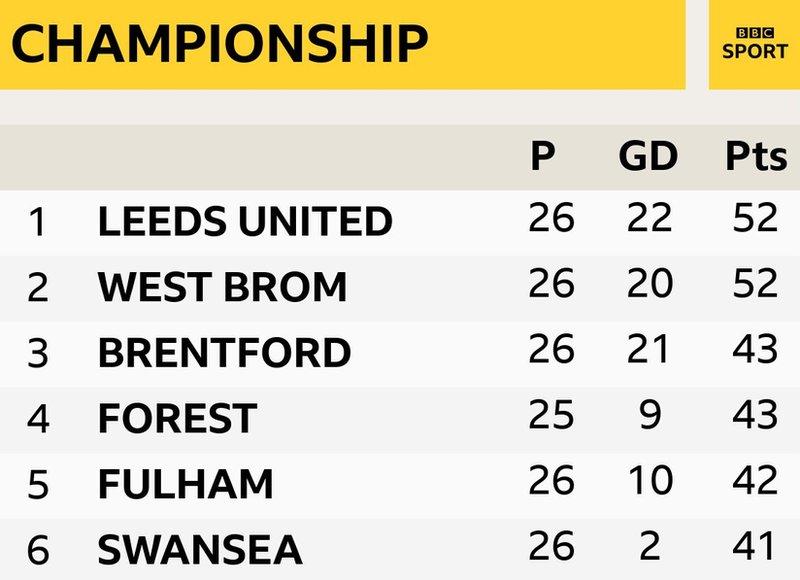 Leeds United are a team who belong in the Premier League; Elland Road is a stadium that belongs there. The city does too.

I go back quite a lot to do corporate work for the club and a lot of people I meet mention my goal against United, but what I really like hearing about is what the team’s current success means to them.

It is great to be close to it, and see it all happening, which is why I am so positive about their promotion prospects – they and West Brom are head and shoulders above every other team in the Championship.

Leeds manager Marcelo Bielsa deserves all the credit for that, because of the style of play he has implemented. I think his side will show how good they are on Monday, no matter which players he picks.

I recently went along to watch Leeds training with my old strike partner Luciano Becchio and every player in each position was doing exactly the same thing.

So, up front, every striker was making the same movements, practising the same things in terms of hold-up play and bringing other players into the game or turning and shooting.

Yes they have got people such as Pablo Hernandez or Helder Costa who are technically gifted and can do things off the cuff, but Bielsa’s way of playing is drilled into everyone.

They have got so many back-up players who can operate in very similar ways to the first-team regulars so, even if he rests some people on Monday, you will see a blueprint of the Leeds way under Bielsa.

A big part of that is the incredible intensity that Bielsa’s teams play at. Arsenal have been playing with a high tempo themselves since Mikel Arteta took charge but they seem to fade late in games.

They cannot afford to do that against Leeds. If they do, we will have another shock on our hands.