They would call it a 'coach killer' in the winter football codes. For Misbah-ul-Haq and a Pakistan team hopeful of amassing a meaningful total at the Gabba, it was as frustrating as it was reckless.

After a morning built on the patient and stoic opening partnership of Shan Masood and Azhar Ali, Babar Azam had the opportunity to show Australian audiences why he is considered the class act of the Pakistan batting order. 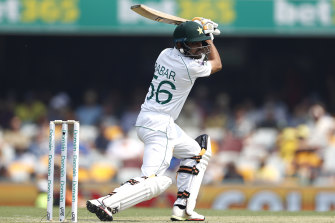 Babar Azam takes a swing and is caught off the bowling of Josh Hazlewood on day one at the Gabba.Credit:Getty

His Test record – one century and 11 half-centuries across 21 outings – has left many with the feeling he has much more to give. An average of 35, Ricky Ponting said prior to the match, belied his ability and talents.

"He's a very, very classy player. We haven't seen the best of him yet. He's a really exciting talent. If you watch him bat, he's better than a 35-average Test player. He's probably the guy I'm looking forward to most this summer. He could be anything," Ponting said.

There had been even more effusive praise from Michael Hussey after Babar spanked 157 against Australia A in the tour game in Perth. Hussey suggested the 25-year-old was good enough to step up and take his place in the tier reserved for the best of the best.

"I think if he can start putting together some big hundreds like this in the Test arena, he's that good … he's a brilliant, brilliant player."

Pakistan needed him to live up to that billing on Thursday. After the steadiest of starts from Shan and Azhar, which took them to 0-75, the wheels began to wobble, then in Babar's case, fall off completely.

They had just lost three wickets in quick succession when Babar came to the crease at 3-77, with Shan (27), Azhar (39) and Haris Sohail (1) all departing with only two runs added to the tally.

The vaunted number five was required to recalibrate against the growing threat of Pat Cummins and Josh Hazlewood and help Pakistan continue to defy Australia's star-studded attack. He promptly walked out, lost his cool and lost his wicket for one.

Pakistan surrendered their early momentum, although an impressive rearguard 76 from Asad Shafiq added some substance to the scorecard. But the needless wicket was a hammer blow to their hopes of putting the Australians under genuine pressure as they chased an exceedingly rare Test victory here.

Up until the collapse, Shan and Azhar had laid some old-fashioned bedrock as they withstood the early attack of the Australian quicks on a green and receptive Gabba wicket.

It was a slow and steady pace – they were 0-57 at lunch – but appeared to have found their way through the most challenging part of the innings as they resisted the temptation to chase balls not in the hitting zone.

For the first time in history, Australia had failed to take a wicket in the first session of a Gabba Test when they had first use of the ball. And the predictable cries of 'it must be a road' had no grounding in fact.

CricViz modelling suggested it was the toughest first morning at the Gabba in their database, assigning it a 9/10 degree of difficulty. Shan and Azhar negated that by offering an attacking shot to just 8 per cent of deliveries, which CricViz suggested was the most conservative first session tactic from any team in the world this year.

The pair made their way to 0-75 before Shan could hold out no longer, nicking one to Smith off Cummins for 27, with Azhar going the very next over at the hands of Hazlewood.

When Haris could add just one, Babar needed to show an understanding of the context of the match and respond accordingly. Instead, he gave fuel to critics that suggest he's a short-form specialist who lacks the temperament for the five-day game.