Ben Stokes tipped Northern Superchargers team-mate Harry Brook to break into the England side in the near future after continuing his Vitality Blast form with a superb innings in The Hundred.

Brook was the third-highest run-scorer in the group stage of the Vitality Blast, hitting 485 runs for Yorkshire with two fifties and a top-score of 91.

The 22-year-old then lit up Emerald Headingley on Saturday night, plundering 62 from just 31 balls in a narrow defeat to Welsh Fire.

Superchargers captain Stokes said of Brook: “He just takes the game on from ball one. He is not scared of any situation, he is not frightened of any bowler and he just sticks to what works for him.

“That is exactly what we try and create in the England team so I don’t think it will be too long before we see him wearing the Three Lions.

“I remember hearing his name about three or four years ago and people saying ‘watch out for this kid’. Watching the games in the Blast he has been phenomenal and he has continued that form here.”

You have a new fan, @harry_brook88 🙌@KP24 hails the #NorthernSuperchargers batter after his dazzling 62 off just 31 balls 💪

Brook, who reached fifty from 21 balls and hit five sixes and three fours in his innings, said: “I felt like I was in good nick out there, it was just a shame I couldn’t get us over the line. I’ve said a few times I want to be a match winner, and in the end I wasn’t. I batted nicely, but it wasn’t enough.

“I was seven off seven balls and tried to kick on. I felt like I knew what they were trying to bowl all the way through – cutters into pitch.

“That opened up the off-side if they got it slightly wrong on line. Then I tried to beat the deep square men when they went straight. 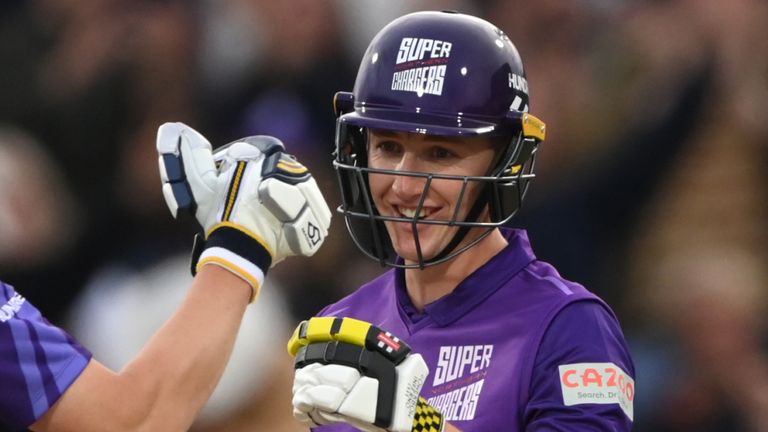 “It’s always an amazing crowd [at Headingley] when it’s packed. I can’t wait for some more.”

On Brook, Pietersen said: “What an innings that was! Rob Key said to me ‘watch this lad play; and my goodness! He is 360 and plays beautifully though the off-side. Those are shots!

“A lot of county cricketers don’t like me saying it but if you condense a tournament you get the depth.

Watch four games in The Hundred on Sunday, starting with London Spirit vs Oval Invincibles live on Sky Sports The Hundred and the Sky Cricket YouTube channel from 10.30am.