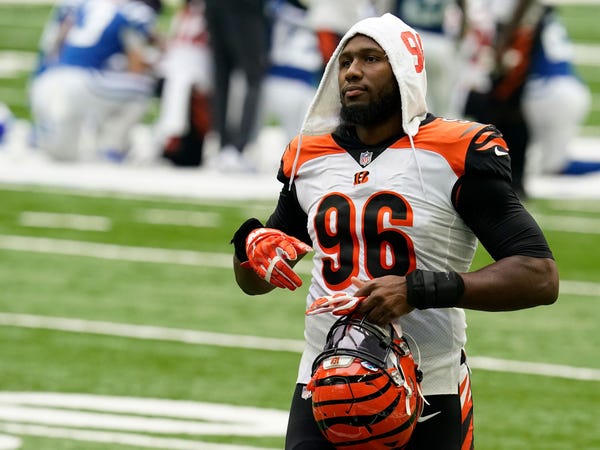 The Bengals had another heartbreaking loss to the Cleveland Browns on Sunday, which ended with their defense giving up a game-winning touchdown drive to Baker Mayfield and the Browns offense in the final minute of the game.

Afterward, Dunlap tweeted a pretty clear signal that he wanted out of Cincinnati.

Dunlap didn't call out his teammates for a bad play or dismiss the Bengals coaching staff. Instead, he put his house on the market.

Dunlap had already been airing his frustrations with the Bengals heading into Sunday's game. On Saturday, Dunlap appeared to share a photo of the Bengals' depth chart to his Instagram account, which had him listed as a third-string player.

"I don't got time for this," Dunlap wrote in the caption.

On Sunday, things finally appeared to boil over, with Dunlap getting in the face of defensive line coach Nick Eason after the Browns' go-ahead score.

Dunlap is clearly over Cincinnati, where he has spent the entirety of his 10 years in the NFL. Chances are, after his behavior this week, the Bengals are pretty over Dunlap as well.

With the trade deadline just over a week away, there's a chance both sides can get what they want.