Bless Virginia for passing the Equal Rights Amendment, but blame women for taking this long 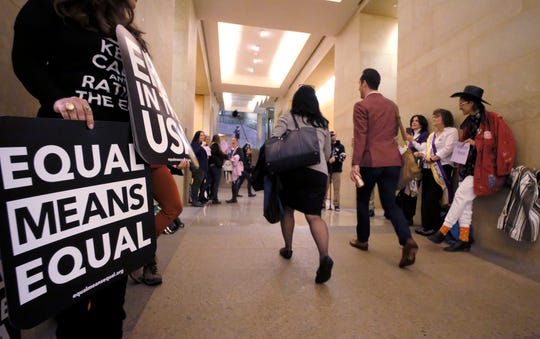 Equal Rights Amendment supporters yell encouragement to two legislators as they walk down a hallway inside the state Capitol in Richmond Tuesday, Jan. 14. (Photo: Bob Brown/Richmond Times-Dispatch via AP)

Last week, Virginia became the 38th state to pass the Equal Rights Amendment — which would be enough to finally ratify the amendment. But enough women and men have snubbed it for nearly five decades that now this milestone may already be legally DOA.

“In so many areas, we still have a long way to go,” Democratic Virginia state Sen. Jennifer McClellan said.

Blame women for it taking this long

McClellan, one of the ERA’s sponsors, was referring to the plight of women in today’s corporate boardrooms and top political offices, but she may as well have applied those comments to the amendment itself.

The constitutional amendment, which Congress approved in 1972, states that “equality of rights under the law shall not be denied or abridged by the United States or by any state on account of sex.”

Supporters say the amendment is needed to provide explicit protection against discrimination based on sex. They say federal and local laws providing that protection can easily be changed.

More than an optics problem: Trump’s white, male team is a bad look for America and bad for national security, too

Women alone could have made this happen but didn’t. Too many of them have chosen political ideology over enshrining the protection in the U.S. Constitution. There is no other way to explain the fact it took 48 years to get the 38th state to ratify the amendment — and only because Democrats took control of Virginia’s Legislature.

Don’t expect Arizona, others to jump in

Critics, who happen to be primarily Republicans, say they don’t like it because the amendment would grant protections for abortion. Further, they say, it is no longer necessary because women already enjoyed “equal protection” under the 14th Amendment.

Under that logic, women would have no obstacles in the 21st century. But that’s just laughable. Women in America still make about 82 cents for every dollar men earn. Men are still kings of corporate boardrooms. No woman has ever occupied the White House. And things aren’t much better at the local and state level.

Nominating a woman can be a boost to Democrats: Is presidency out of reach for women? Warren-Sanders tiff ends silence on insidious myth

There are enough women — and enough progressive men — in state legislatures to ratify this amendment and send a strong message. Arizona, Alabama, Arkansas, Florida, Georgia, Louisiana, Mississippi, Missouri, North Carolina, Oklahoma, South Carolina and Utah have not ratified it.

But don’t hold your breath because enough Republican women are against it, leaving it to the courts to determine whether the ERA is really dead. A legal showdown is expected over how to proceed or whether too much time has passed since the congressional deadline, forcing supporters to start from scratch.

And that’s just a pity and shameful, especially this year when the country celebrates the 100th anniversary of the 19th Amendment that gave U.S. women the right to vote.

Elvia Díaz is an editorial columnist for The Republic and azcentral, where this column originally appeared. Follow her on Twitter, @elviadiaz1.

You can read diverse opinions from our Board of Contributors and other writers on the Opinion front page, on Twitter @usatodayopinion and in our daily Opinion newsletter. To respond to a column, submit a comment to [email protected]