Tom Brady’s ‘last’ touchdown ball sells at an auction for $518,000… hours before the NFL’s GOAT announces his sensational comeback with Tampa Bay Buccaneers at the age of 44!

A NFL fan has struck gold after selling what was believed to be Tom Brady’s final touchdown ball – only for the iconic quarterback to then announce his return to the sport.

Brady found Mike Evans for a 55-yard touchdown in what was believed to be his last game, when the Tampa Bay Buccaneers lost their NFC playoff clash with eventual Super Bowl winners the Los Angeles Rams.

Wide-receiver Evans, as is a feature of his normal celebration, then threw the ball into the end-zone as a souvenir for a Buccaneers fan. 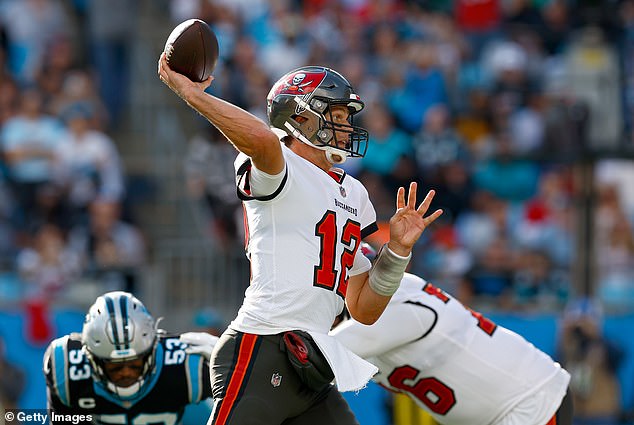 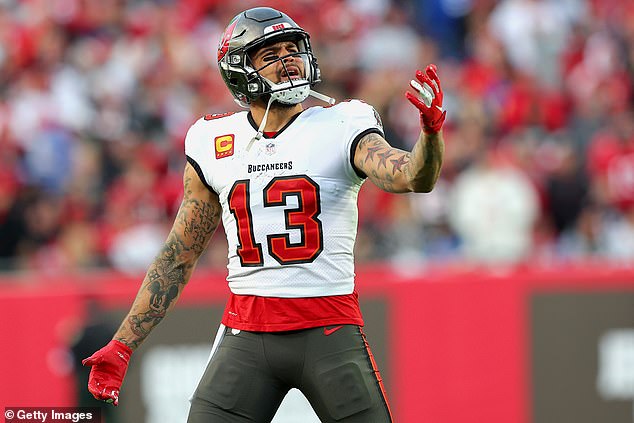 According to auctioneers Lelands, his last touchdown pass ball was sold for $518,628.

The auction ended on Saturday at 10pm Eastern Standard Time – though whoever bought the ball, weren’t buying what they expected.

Less than 24 hours later, Brady stunningly announced that he made a U-turn on his decision to retire from the sport just six weeks prior.

In a message on Twitter at 7.13pm EST on Sunday, he posted: ‘These past two months I’ve realised my place is still on the field and not in the stands.

‘That time will come. But it’s not now. I love my teammates, and I love my supportive family. 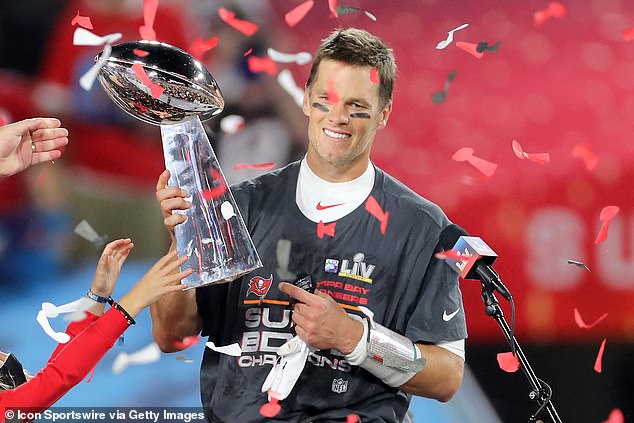 Brady’s ‘final’ touchdown ball sold for over $518,000 dollars on an online auction over the weekend

Hours after the auction, Brady announced his return to the NFL just six weeks after he said he would retire

‘They make it all possible. I’m coming back for my 23rd season in Tampa. Unfinished business LFG.’

His touchdown pass to Evans happened with 3:20 to go in the fourth quarter, cutting the Rams’ lead to 27-20.

They couldn’t fight back however as the Rams won 30-27, before beating the Cincinnati Bengals 23-20 in the Superbowl.

It’s not the first time that Evans gave away another touchdown ball to a Bucs fan.

As reported by Yahoo Sports, he threw what happened to be the 600th touchdown of Brady’s career to a fan named Byron Kennedy.

Buccaneers staff went into the stands to negotiate its return and Kennedy gave it back.

Brady told NFL legends Peyton and Eli Manning on Monday Football the next day that Kennedy ‘lost all of his leverage once he gave the ball away’.

The value of the milestone ball was estimated anywhere from $500,000 to $750,000. Now it’s part of Brady’s personal trophy collection.

His first ever career touchdown pass, to Terry Glenn at the New England Patriots, was previously auctioned off on the site last year for $428,841. 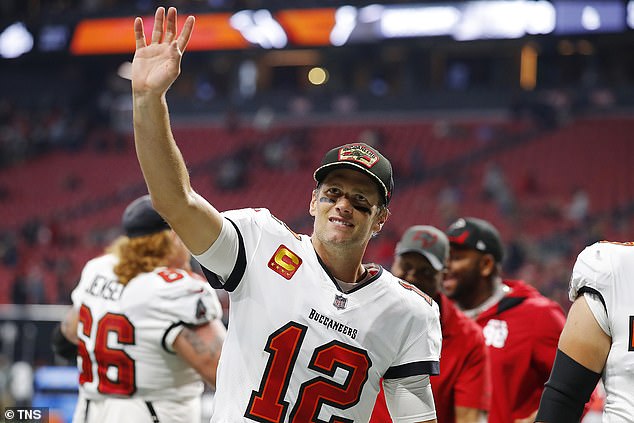 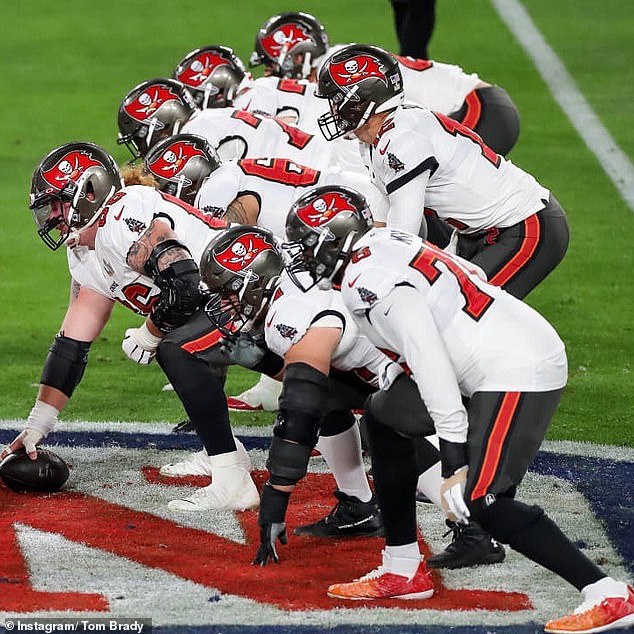 The iconic quarterback, 44, brought the curtain down on a glittering 22-year career when he announced his retirement on February 1.

The quarterback stunned the world on Sunday when he confirmed he would be re-joining the Buccaneers for another campaign after 40 days in retirement.

However, his decision may not be that surprising considering just a week into his ‘retirement,’ Brady said ‘never say never’ about playing again.

He made the comeback announcement hours after sharing a photo of himself visiting Manchester United’s Old Trafford training ground  and meeting iconic striker Cristiano Ronaldo. 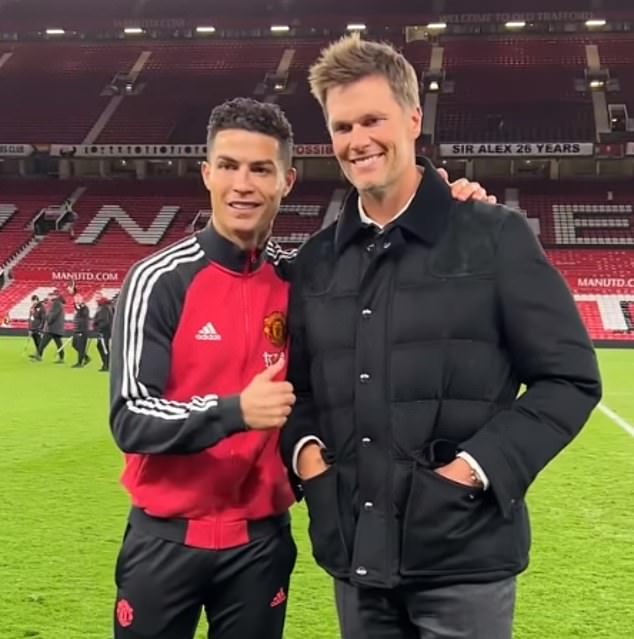 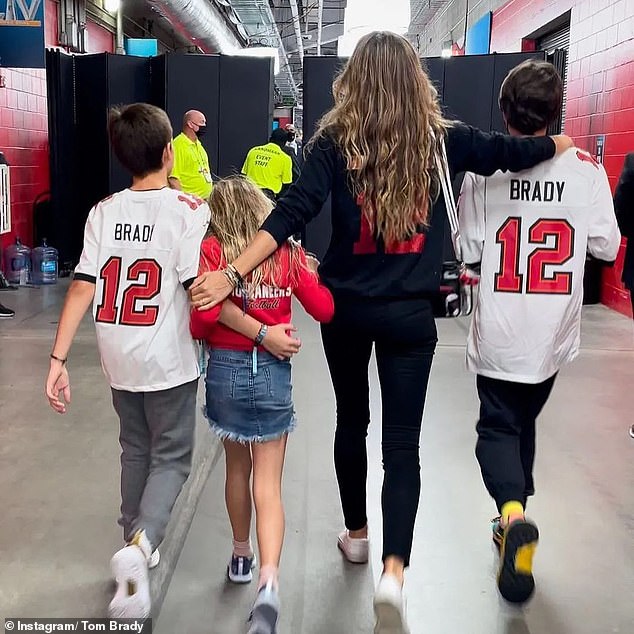 Brady had announced his decision to retire last month, citing the desire to spend more time with his wife Gisele Bundchen and three children. Brady posted the above photo when he announced his return

Brady announced his decision to return to the Bucs one day before the NFL free agency period begins.

When he announced his retirement, Brady cited his desire to spend more time with his wife, supermodel Gisele Bundchen, and three children when he decided to walk away from the game.

‘I have always believed the sport of football is an ”all-in” proposition – if a 100% competitive commitment isn’t there, you won’t succeed, and success is what I love so much about our game,’ Brady wrote on February 1.

‘There is a physical, mental, and emotional challenge EVERY single day that has allowed me to maximize my highest potential. And I have tried my very best these past 22 years. There are no shortcuts to success on the field or in life.’

‘This is difficult for me to write, but here it goes: I am not going to make that competitive commitment anymore. I have loved my NFL career, and now it is time to focus my time and energy on other things that require my attention.’

Brady signed a one-year, $25 million contract extension after guiding the Bucs to a Super Bowl win last year. That deal included a $20 million signing bonus, $15 million of which would have been paid to him in February.

The details of his deal for the 2022 season remain unclear.