MUHAMMAD MOKAEV is one win away from cementing his place as the best junior bantamweight on the planet after his victory over Tynyshtyk Zhanibek.

The 19-year-old undefeated Brit, who immigrated to England from Dagestan aged 12, overcame the Kazakhstani via unanimous decision after three impressive rounds this morning in Bahrain. 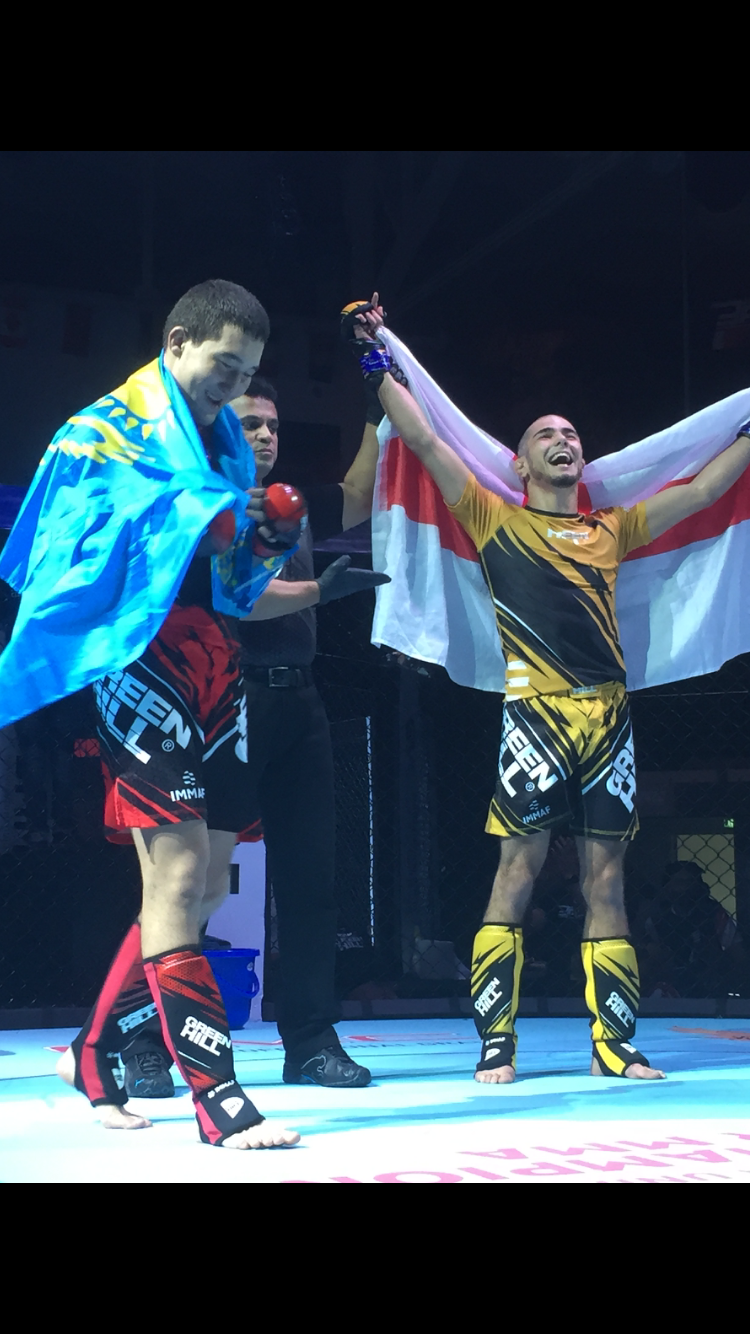 Now “Punisher” is looking to become a double world champion when he battles Japan’s Reo Yamaguchi for gold at Khalifa Sports City on Thursday.

The 2010 IMMAF-WMMA gold medallist and reigning European champion had already knocked off Finland’s Max Hynninen and Bulgaria’s Nikolay Atanasov prior to today.

Despite being taken down in the second, Mokaev insists he executed his game plan perfectly against Zhanibek.

And he insisted Yamaguchi will have to either “break me or knock me out” to stop the teen adding another accolade to his collection.

Mokaev told Sun Sport: “I’ve had a tough three fights. Unanimous decision first, then in the second fight against Bulgaria I got dropped in the second round. Then I got into a submission, but I’m not here to tap, so I was thinking ‘either break me or you’re going to have to knock me out’. I came back to take him down and smash him.

“Second round I let him take me down, it was the game plan. What’s he going to do? He took me down but didn’t land any punches and got tired.

“Then in the third I came out fresh, he was tired but thought he could take me down again but he couldn’t. Then he broke mentally.

As the only undefeated fighter left in the junior competition, few would forgive Mokaev for feeling the pressure.

However, he insists it is what drives him on.

“In the IMMAF tournament I’m the only undefeated fighter right now, so it’s pressure, but good pressure,” he said.

Mokaev also recently revealed to SunSport that despite Khabib Nurmagomedov being a hero of his -he is not a traditional Dagestani grappler.

“I’ve never been dropped or knocked down in 17 fights, I have good striking.

“Khabib is very big inspiration for all the new generation of fighters, we are looking up to these guys.

The concentration ? #Alhamdulillah I wish all the best to all guys competing at the @immafed and main thing without injury!

The concentration ? #AlhamdulillahI wish all the best to all guys competing at the @immafed and main thing without injury!

“These guys don’t drink, don’t party and train hard, they are a very good example for young fighters.

“In Dagestan there’s a lot of great fighters, but I’m hoping because of my name in the UK I can make more noise than these guys.”

Despite appearing to have come out on top over three rounds, the junior lightweight has to settle for bronze after a split-decision favoured her Kazakstani opponent.

In the men’s Junior Flyweight, Ireland’s Gary Rooney’s hopes of bringing gold back home were ended via submission courtesy of another Kazakhstan ace, Gani Adilserik.

But Emerald Isle star Nadine Abbott bissett will have her Green Army back out in full support again tomorrow.

She secured a split decision over Ukilay Akhmetualikyzy (Kazakhstan) to advance to tomorrow’s Junior Atomweight final.

The youngster will battle Poland’s Magdalena Czaban for the crown.