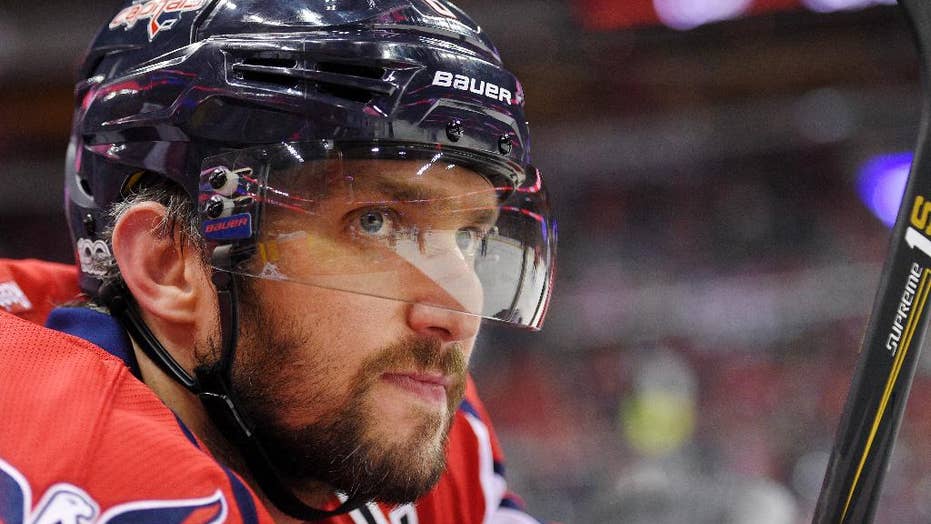 Alex Ovechkin broke the news that he’s staying with the Washington Capitals in true Ovi fashion with five exclamation points.

Ovechkin re-signed Tuesday with the only NHL team he has ever played for, inking a $47.5 million, five-year deal. The superstar Russian winger who captained the Capitals to their only Stanley Cup championship in franchise history is now under contract through the 2025-26 season.

“I’M BACK DC !!!!!” Ovechkin tweeted with a picture of him holding up the signed contract surrounded by his family.

Ovechkin, who turns 36 in October, ranks fifth on the career goals list, 164 back of Gretzky’s record of 894 that was long considered unbreakable. Ovechkin would need to average almost 33 goals a season to catch Gretzky during this contract, which expires when he’s on the verge of his 41st birthday.

“Alex is the face of our franchise and is committed to this organization and this city,” general manager Brian MacLellan said in a statement. “Alex embodies what our franchise is all about, and we’re thrilled that he will continue his career in the Caps uniform for the next five years.”

Ovechkin signed for one more season than most were expecting, extending him past longtime running mate Nicklas Backstrom’s contract that runs through 2024-25. The salary cap hit of $9.5 million — just below Ovechkin’s annual number during his $124 million, 13-year contract that’s expiring — allows MacLellan to keep a playoff- and Cup-contending core around him.

“Alex is a world-class athlete who will forever be regarded not only for leading the team to achieve our ultimate goal of winning the Stanley Cup but also for inspiring the next generation of fans and youth players,” owner Ted Leonsis said. “Not only is he committed to the franchise but also to the community, and we look forward to seeing him in the Capitals uniform for years to come.”

Washington selected Ovechkin first overall in 2004, and since he made his debut in 2005, the Moscow native has scored 244 more goals than the next-closest player, Pittsburgh’s Sidney Crosby. His 1,320 points are second to Crosby, a longtime rival Ovechkin has been connected with since they broke into the league together.

After losing goaltender Vitek Vanecek to the expansion Kraken, they unloaded salary Monday night by trading defenseman Brenden Dillon to Winnipeg for 2022 and 2023 second-round picks. They have less than $5 million in cap space and still need to sign restricted free agent goalie Ilya Samsonov to a new contract and add a backup.