Australia's Cate Campbell is within reach of a huge pay cheque after remaining on top of the women's rankings in swimming's lucrative World Cup series with just one leg left. 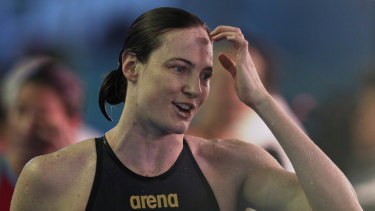 Cate Campbell stands to bank $300,000 if she can keep up her hot form in Qatar this week.Credit:AP

Remarkably, Campbell is in reach of a cheque of at least $300,000 (all figures AUD) if she maintains her winning ways in Qatar.

Campbell has now broken the 53-second barrier over the distance a record 44 times, including 10 times this year alone.

The women's overall winner of the final two Cup rounds – called a cluster – in Kazan and Doha – will receive $72,555.

And if Campbell emerges as the women's No.1 for the entire Cup series which is contested in a 50m pool, the 27-year-old triple Olympian will claim $218,000.

Campbell is already buzzing after winning the last Cup cluster in October, snapping up $72,555 in prize money.

Cash prizes in individual World Cup events are also on offer with $2200, $1450 and $725 handed out to the top three placegetters respectively.

Then there is the International Swimming League where she has already earned $23,500 over just two legs of the 25m, short course competition.

She is expected to earn more than $11,500 at the next leg in London from November 23-24 competing for her team London Roar.

And if they make the final at Las Vegas' Mandalay Bay Resort and Casino from December 20-21 – which features the top two European and US teams – $14,500 goes to each swimmer for the winning outfit.

Either way, Campbell will be having no complaints with all ISL swimmers on a salary with each 24-strong team sharing $218,000 and receiving five star accommodation and business class travel.

The ISL is the brain child of Ukrainian billionaire Konstantin Grigorishin who has budgeted $29 million for the inaugural season with $10.1 million going to athletes in prize money over seven legs.

More than 100 Olympians are represented in the ISL, including 41 gold medallists from the 2016 Games.