Home » Sport » Controversial VAR decisions crushed 2 teams at the Women's World Cup, and it shows that the review system might be doing more harm than good

Controversial VAR decisions crushed 2 teams at the Women's World Cup, and it shows that the review system might be doing more harm than good

The Women’s World Cup was once again marred by a controversial late decision by the Video Assistant Referee (VAR) that swung the outcome to a critical match.

In Scotland’s final match of the group stage, they jumped out to a 3-0 lead over Argentina with the help of a brilliant goal from Erin Cuthbert in the 69th minute. With just 20 minutes remaining, it looked as though Scotland was on their way to victory and a shot at survival into the knockout round.

Read more: Scottish striker celebrates World Cup goal by kissing a picture of herself as a child her father gave to remind her of where she started

Then, disaster struck, first in the form of two quick goals from Argentina that suddenly brought the match back into contention. Argentina could keep their own hopes of advancing alive with a draw, and secure a spot in the knockout stage with a win, putting the pressure on to find at least one more goal.

It would come in the final minutes of the match, with not one, but two assists from VAR.

In the 86th minute, Scottish defender Sophie Howard got away with a tackle in the box that initially went unregarded by the referee, but after a lengthy VAR review, a penalty was awarded.

Now in stoppage time, the game-changing penalty kick was stopped by Scottish keeper Lee Alexander, but another VAR review determined that she had left her line early, prompting the penalty to be taken again. 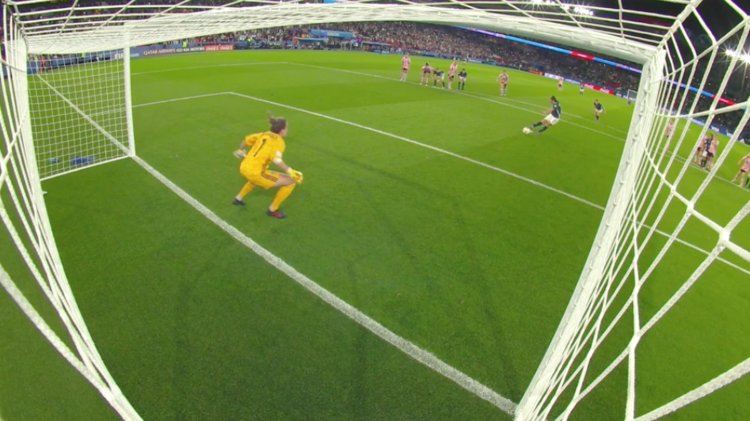 On Argentina’s second attempt from the spot, Flor Bonsegundo buried the tying goal (if the first video doesn’t work in your location, try the second).

Argentina would hold on to the draw, securing a point from the match and leaving Scotland in fourth place in Group D, eliminating them from the tournament.

It was the third time that VAR determined a keeper had come off their line early at the Women’s World Cup, and the second time the decision has come with monumentally consequential results. On Monday,Nigeria was holding on to a scoreless draw against host-nation France and similarly stopped a penalty kick only for VAR to determine a second attempt was needed.

While Nigeria’s hopes of making the knockout round are still alive, had they held on for a draw against France, they’d already been through.

Read more:Women’s World Cup 2019: Everything you need to know before the tournament kicks off in Paris

The purpose of VAR’s emergence in soccer was to ensure that the “right” call was made, but in two years of experimentation at international tournaments, the review system has shown capable of as much harm as good. For every egregious decision that VAR corrects, it feels as though two or three ticky-tack decisions are made in the wrong direction, oftento hugely consequential results.

Soccer is meant to be in perpetual motion, and the near-constant looks to review have been a frustrating reality whenever VAR is in use. Further, in the case of Nigeria and Scotland, the overturned decision by VAR is one that goalkeepers get away with all the time.

Goalies come off their line a fraction of a second early on plenty of penalty kicks. Oftentimes it’s not noticeable to the naked eye, and even if it is, it’s rarely called. But in super slow-motion that movement is clear and, apparently, it’s necessary to enforce. With the knockout stage fast approaching, it’s not hard to imagine a match going to penalty kicks, with referees constantly checking and re-checking with the replays to enforce whether or not a goalie left their line on a save.

VAR was meant to be a blessing but is looking more and more like a curse to a sport that should value fluidity and presence over a frame-by-frame investigation into what exactly constitutes a goal.

Should such controversial VAR decisions continue, don’t be surprised if the reviews themselves come under review before they’re implemented further.