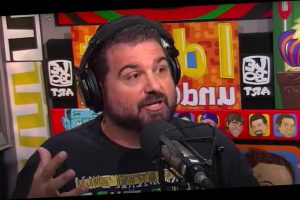 Dan Le Batard isn’t going anywhere, although Monday was the final time he could be heard on the ESPN airwaves.

An eight-year tenure with ESPN ended Monday, Jan. 4 for Le Batard after he and the company agreed last month to mutually part ways. The final ESPN edition of the “Dan Le Batard Show With Stugotz” aired Monday morning for two hours, and Le Batard’s final televised “Highly Questionable” episode was slated for Monday, as well.

“We could not be more grateful for your support,” Le Batard said Monday, according to the Miami Herald. “That gratitude is mountainous and real and forever. It’s the primary reason we’re leaving. You’ve given us the freedom to know we can. We know somehow you’ll follow us. We know the way you care about us — giving us permission to be different, demanding it of us, and then rewarding us for it.”

Le Batard’s next destination is at this point unknown, The hope is that his radio show can continue as soon as Tuesday via the show’s podcast as part of the Le Batard and Friends network.

The show’s producer, Mike Ryan, warned the audience to please be patient with any “latency” issues that could arise during the transition away from ESPN. According to the Miami Herald, the show is in talks to find a permanent hosting platform.

There’d long been tension between Le Batard and ESPN, in part because of Le Batard’s willingness to discuss matters outside of sports on his show. In November, Le Batard felt disrespected when his long-time producer, Chris Cote, was laid off. Le Batard brought Cote back and paid him out of his own pocket.

Monday, Le Batard said of ESPN: “They have slowly erased us.”

Le Batard’s programming on ESPN gained a major following, though. That’s part of why he feels so confident that whatever his next step will be, it will work.

“We approach this scary cliff together to take quite the leap of faith. Are you ready to jump with us?” Le Batard said Monday. “If you’ve been paying close attention, we’ve been ready to take this leap for awhile. We know the strength of the army that stands at attention at our back. I promise you, we’re gong to show you how much we don’t take that for granted. I can’t wait to take you on this fight, and this flight, with us.”

Le Batard’s Monday show itself both began and ended in memorable fashion. The opening featured a 12-minute introduction for the “Stat of the Day” segment, while it ended with co-host Greg Cote stuck on the hard network out, a staple of the show.

According to the Miami Herald, Cote was about to reveal where the Le Batard show might land next, so that news could be coming soon.