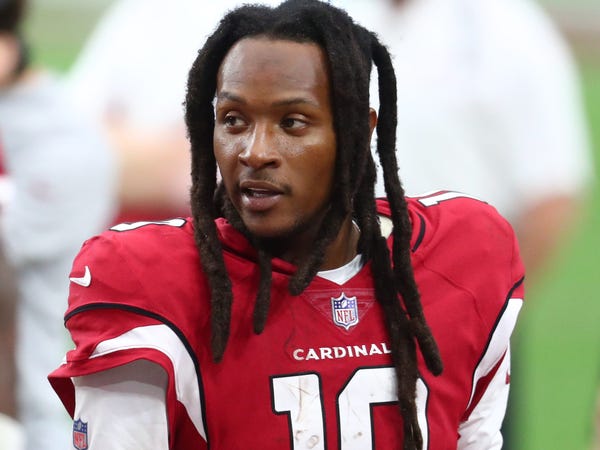 DeAndre Hopkins enjoyed a brilliant performance against the Seattle Seahawks Sunday night, but the Arizona Cardinals' superstar wide receiver had some business to attend to first.

While on his way to State Farm Stadium for Sunday's thriller, Hopkins stumbled upon a pro-Trump caravan — or "Trump Train" — just nine days removed from the contentious 2020 presidential election. The four-time Pro Bowler reportedly weaved in and out of traffic on I-10 while driving in a sleek Ferrari convertible. Photos posted on social media show Hopkins throwing his hands in the air to flip off those involved in the rally.

Critics of Hopkins — who appear to support the president — were offended by the wide receiver's antics. One individual took to Twitter to call Hopkins "a piece of trash" for purportedly putting his 8-year-old son at risk by weaving through traffic. Another person took issue with the 28-year-old's alleged unwillingness to "let people exercise their 1st amendment right."

Of course, Hopkins' decision to give Trump supporters the middle finger is an expression of his own first amendment right, a fact the detractor did not acknowledge in his rant.

Many others expressed their approval of Hopkins' pregame stunt on social media by calling him a "legend" and suggesting that they would have acted similarly in that situation. After the star went on to haul in 10 catches for 103 receiving yards and a touchdown in the Cardinals' 37-34 overtime win later in the evening, Huffington Post reporter Ja'han Jones pointed out that the team is "undefeated in games on days when my guy @DeAndreHopkins gives two middle fingers to a caravan of AZ Trump supporters while driving his Ferrari."

Hopkins leads the league with 704 receiving yards, 57 receptions, and 36 first down receptions through seven games played this season. With a 5-2 record on the season thus far, Arizona is nipping at the Seahawks' heels for first place in a particularly competitive NFC West. Hopkins and the Cardinals will host the Miami Dolphins and Buffalo Bills to finish up their homestand before traveling to Seattle for a rematch with MVP favorite Russell Wilson and his Seahawks for control of the division.