Donald Cerrone, one of the most entertaining strikers in the UFC, just beat Al Iaquinta in an action-packed lightweight fight on Saturday.

The two fighters earned $50,000 bonuses for producing the “Fight of the Night” in front of 10,960 fans at the Canadian Tire Center in Ottawa, Canada, and it’s all because they battered each other relentlessly with strikes to the head, body, and to the legs.

By the end of five thrilling rounds, Cerrone was awarded a decision win as he delivered the more damaging blows, opening up cuts to Iaquinta’s face because of punch flurries and powerful front kicks.

With a knockdown in the third round and an Octagon dominance, Cerrone was the comfortable winner and celebrated by parading his young son Dacson Danger in the middle of the cage.

The American, who now has three impressive wins in a row, then expressed his desire for a title fight against the lightweight champion Khabib Nurmagomedov but, failing that, would happily invite lightweight rival Conor McGregor to battle in the summer. 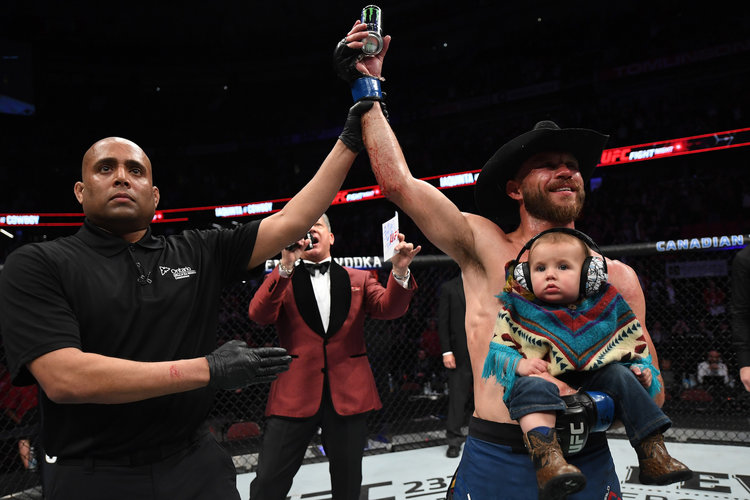 Cerrone, with one hand held aloft, holds his young son with his other hand.Photo by Jeff Bottari/Zuffa LLC/Zuffa LLC via Getty Images

When asked by the UFC commentator and former middleweight champion Michael Bisping how he felt after his thumping win, Cerrone said: “More importantly, how bad— is this poncho this boy is wearing?”

After the crowd had finishing cheering his young son, Cerrone added: “I want the title unless Conor McGregor wants to fight me in July, I’m ready… let’s do it.”

Cerrone has been campaigning for a lucrative fight against McGregor since last year. After he almost broke Mike Perry’s arm in November, Cerrone hinted he’d been in discussions with the UFC with regards to an “exciting” opponent.

Read more: Conor McGregor against Cowboy Cerrone has all the makings of a UFC classic

Cerrone amped that campaign up a gear after he stopped Alexander Hernandez in January, before the UFC president Dana White said the next month that he’d be “down” for making Cerrone versus McGregor happen in the summer.

Though the fight couldn’t be agreed at first, with Cerrone going on to fight and beat Iaquinta on May 4, the teams representing both athletes could return to the negotiating table for a bout that could feature as a co-main event fight on the UFC 239 card currently headlined by the light heavyweight champion Jon Jones’ title defense against Thiago Santos on July 6.

McGregor is yet to respond to Cerrone’s latest challenge.