SAN FRANCISCO — Mike Krzyzewski has spent more than four decades at Duke telling his players what to do, with championship-level results.

With his Hall of Fame career in danger of coming to an end, Krzyzewski let his players dictate the game-closing defensive strategy of switching from an uncharacteristic zone defense into Duke’s famous man-to-man.

The key defensive stops and two late baskets by Jeremy Roach moved Krzyzewski within one win of his record-setting 13th trip to the Final Four in his farewell season with a 78-73 win over Texas Tech on Thursday night. 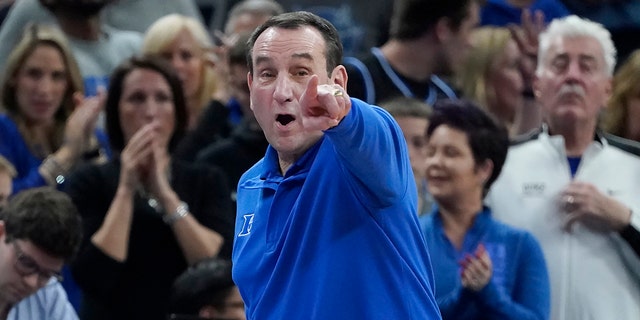 Duke head coach Mike Krzyzewski gestures toward players during the second half of his team’s college basketball game against Texas Tech in the Sweet 16 round of the NCAA tournament in San Francisco, Thursday, March 24, 2022.
(AP Photo/Marcio Jose Sanchez)

Roach did the rest with two jumpers during a 7-0 run as the steady sophomore came through in the clutch for a second straight game to send second-seeded Duke (31-6) into an Elite Eight matchup against fourth-seeded Arkansas.

Paolo Banchero led Duke with 22 points, Mark Williams scored 16 and Roach added 15 as the Blue Devils made their final eight shots from the field to hold off third-seeded Texas Tech (27-10) and give Coach K his record 100th NCAA Tournament victory.

“I would say all year in the biggest moments we’ve always stepped up, and there’s no bigger moment than this,” Banchero said. “I don’t know about these guys, but I’ve never played in a basketball game like that.”

As compelling as the action on the court was in this taut West Region semifinal, the story of this Blue Devils run has surrounded the farewell tour of their Hall of Fame coach.

Krzyzewski announced last June he would retire after this season. After missing the tournament last year, Duke was back with a roster filled with NBA prospects and capable of delivering Krzyzewski his sixth title.

Duke played from behind for much of the first half but was much sharper offensively in the second half. Williams got free for three easy baskets early in the half to get the Blue Devils rolling. 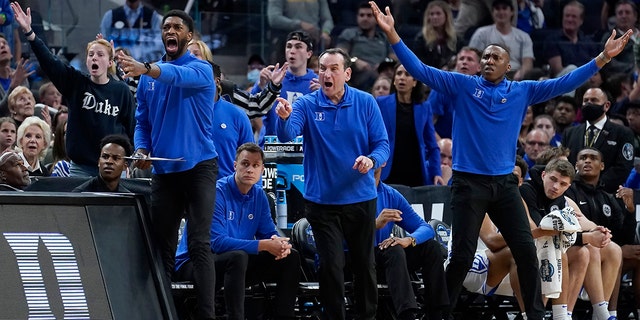 Duke head coach Mike Krzyzewski, middle, and assistant coaches react during the first half of a college basketball game between Duke and Texas Tech in the Sweet 16 round of the NCAA tournament in San Francisco, Thursday, March 24, 2022.
(AP Photo/Marcio Jose Sanchez)

Then the vocal Duke contingent on hand for the first NCAA Tournament games in San Francisco since 1939 made its presence known midway through the half when A.J. Griffin tied the game at 47 with his third 3-pointer and Banchero followed with a jumper that gave Duke the lead.

But a Red Raiders team featuring four super seniors and five players with more than 120 career games didn’t go away and the game stayed tight as Duke used the zone to negate Texas Tech’s strength advantage.

“They have a Hall of Fame coach in Coach K over there and he was trying to find a way to slow us down because we were scoring,” guard Adonis Arms said. “I just think if we would have just recognized it a little quicker, it would have been fine. But it was a great adjustment from Coach K.”

Kevin McCullar and Banchero traded 3s with Banchero’s long-range shot putting Duke up 69-68 with less than three minutes to play.

That’s when Duke made the switch back to man defense. Roach made two jumpers and the defense did the rest with Krzyzewski even throwing in a patented Duke floor slap for good measure. Bryson Williams had a shot blocked by Mark Williams, committed a turnover and shot an airball.

“The slapping the floor, what the hell? Why not?” Krzyzewski said. “Our guys really wanted that because it’s kind of like a cross the bridge to the brotherhood. They can now say they did that.”

Griffin’s two free throws with 12.9 seconds to play gave Duke a 77-73 lead. Arms then missed a 3-pointer and Krzyzewski gave an emphatic fist pump to celebrate his 17th trip to the Elite Eight. 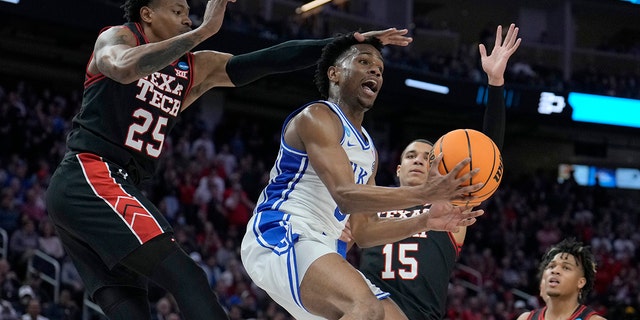 Duke guard Jeremy Roach, middle, is defended between Texas Tech guard Adonis Arms (25) and guard Kevin McCullar Jr. (15) during the second half of a college basketball game in the Sweet 16 round of the NCAA tournament in San Francisco, Thursday, March 24, 2022.
(AP Photo/Tony Avelar)

Texas Tech: Coach Mark Adams’ first season has been a remarkable one as he brought in four senior transfers after taking over what had been a thinned-out roster following Chris Beard’s departure for Texas. The Red Raiders made it to their third Sweet 16 in the past four tournaments.

“I thought it was an unbelievable year,” Adams said. “It’s just a team that just reached all kinds of heights no one ever thought was possible.”

Duke: The Blue Devils have been carrying a heavy responsibility trying to cap Krzyzewski’s final season with a championship. The young players showed some nerves early, missing four of five shots and committing three turnovers, leading to a quick timeout by Krzyzewski. They quickly steadied things and got right back into the game but struggled to generate any consistent offense until the second half.

There was a lighthearted moment in the first half when Roach came up with a loose ball and was trying to take it up court in transition. Roach stepped on the sideline and then ran into an official before falling down right next to Duke’s bench.

The official ruled for the ball to go back to Texas Tech but Krzyzewski jokingly signaled for a block on the referee instead.

Duke will play Arkansas on Saturday for a spot in the Final Four. The only previous tournament meeting between the schools came in the 1994 title game that Arkansas won 76-72.