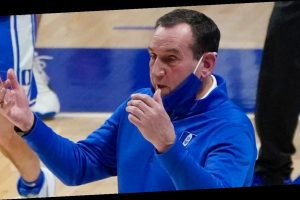 Duke men’s basketball coach Mike Krzyzewski caught some flak Saturday night after the Blue Devils dropped their third straight in the 2020-21 season with a loss to Louisville.

Krzyzewski gave a tense response to a question about where the team goes after the loss. The question was asked by student reporter Jake Piazza.

“Why don’t we just evaluate this game,” Krzyzewski said. “I’m not into what our next step forward is right now. We just finished a hard-fought game.”

The coach asked Piazza what his major was and when he replied with “Econ,” Krzyzewski decided to compare a regular-season college basketball game to a tough hypothetical test.

The legendary college basketball coach was criticized almost as soon as the clip hit social media.

Duke is in a position the program has rarely been in over the last few seasons.

The Blue Devils are 5-5 overall and 3-3 in ACC games. The team dropped out of the rankings and are poised to finish on the outside of the Top 25 in the Associated Press poll and not making the NCAA Tournament if they don’t shape up their play.

The Blue Devils have a handful of games remaining on the schedule and a quick turnaround is not out of the question but games are only going to get more difficult from here.