Elaine Thompson-Herah broke the Olympic record and defended her 100m title after an astonishing final in Tokyo.

Barely two hours after Dina Asher-Smith’s Olympic dream was shattered by a hamstring injury, Thompson-Herah stole the show with a quite breath-taking 10.61sec run that broke Florence Griffith-Joiner’s 1988 mark by one hundredth of a second.

She was followed over by double champion Shelly-Ann Fraser-Pryce in 10.74sec and Shericka Jackson in 10.76sec in a Jamaican 1-2-3. 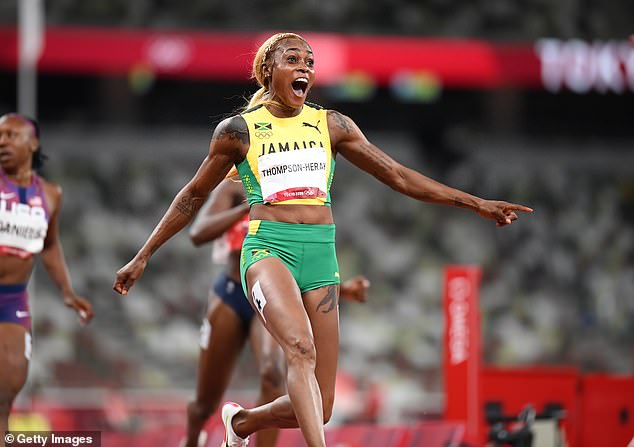 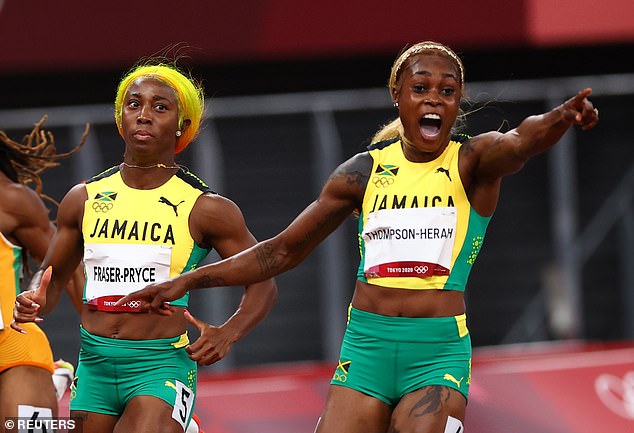 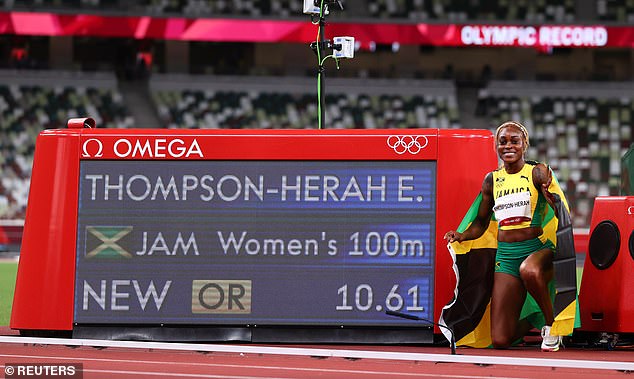 Thompson-Herah marks her new Olympic record of 10.61, the second fastest time in history 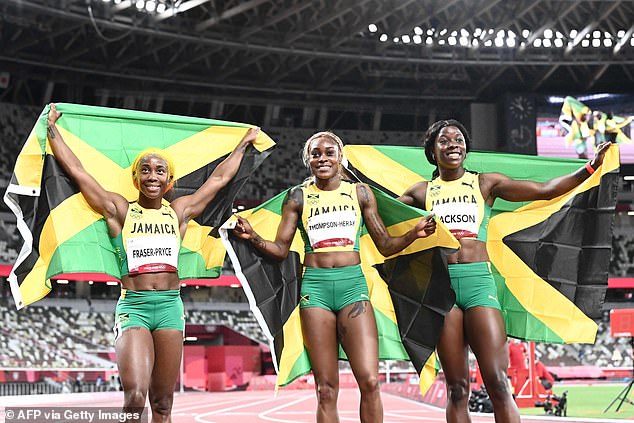 It was a Jamaican clean sweep as Elaine Thompson-Herah (centre) took gold, Shelly-Ann Fraser-Pryce (left) in second and Shericka Jackson (right) in third

Fraser-Pryce, 34, had got off to a rapid start and led through 60m but was caught by the blistering finishing speed of Thompson. Britain’s Daryll Neita was eighth in 11.12sec.

Thompson-Herah told the BBC: ‘I have been struggling with my injury back and so forth, I see all the bad comments, and for me to stay focused, held my composure, I take all of my losses, all of my defeats and I use them as my motivation.’

Fraser-Pryce said: ‘I am excited because as a mother and being my fourth Olympics, to be able to stand again on the podium is just a tremendous honour.

I am hoping wherever in the world, mothers, athletes, females we understand that there is so much more we can achieve.

‘It is crazy, but you know my emotions are still very raw right now. I am sure I will go home and there will be some tears.’ 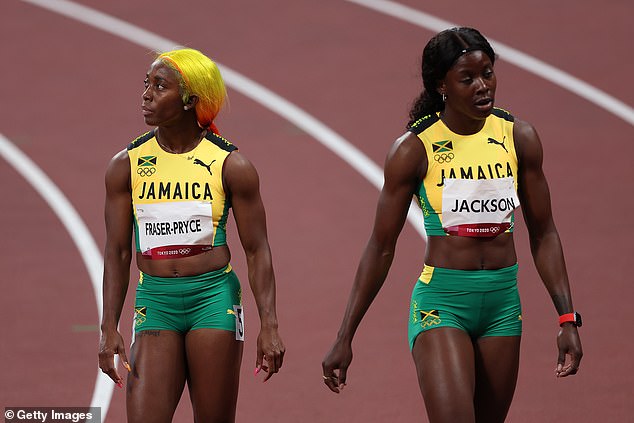 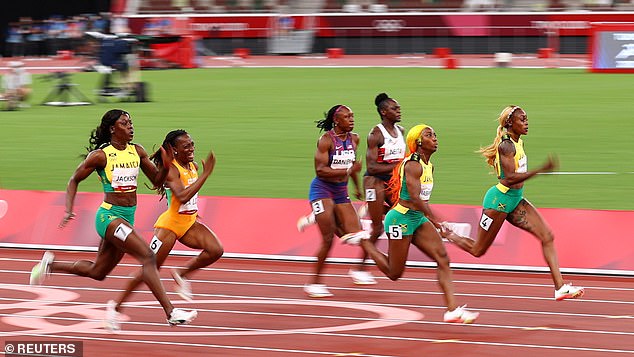 With the top six breaking the 11-second mark, this final ranked as one of the quickest in history

It came after British medal hopeful Dina Asher-Smith failed to qualify for the final and subsequently withdrew from the 200 metres event after revealing her struggles with a hamstring injury in the build-up to the Olympics.

While damage to her hamstring has been known since she pulled out of a race in Gateshead less than three weeks ago, the severity had been kept a close secret.

Asher-Smith broke down on tears during a live interview on the BBC as her dreams of Olympic gold were left in tatters.

She could only manage an underwhelming third-placed finish and a time of 11.05 seconds in her 100m semi-final. 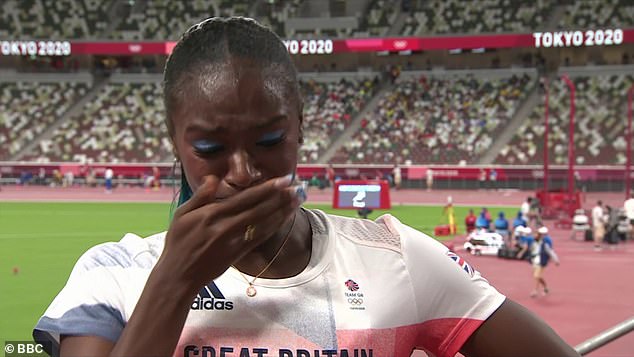 Dina Asher-Smith was in tears as she spoke about how a hamstring injury wrecked her Olympics dreams, confirming she was withdrawing from the 200 metres

That left Asher-Smith relying on being one of two fastest losers to scrape into the final but, in a twist of fate, he spot was taken by British team-mate Neita.

The 25-year-old then confirmed her withdrawal from the 200m, where she was tipped to win gold, following conversations with her trainer John Blackie.

Asher-Smith revealed she had torn her hamstring in the British trials last month and that surgery would have necessitated a lay-off of at least three months.

Having sought a second diagnosis that found she had suffered a hamstring tear rather than a rupture, Asher-Smith made the Olympics but was never likely to perform near her best with such disrupted preparation.

After her elimination she indicated she still intends to pursue a podium finish in the 4x100m relay, but her bid to become Britain’s first female sprint medallist at an Olympics since 1960 is on hold until Paris 2024.

Asher-Smith said: ‘It broke my heart because I am a competitor. It is the Olympics but there are plenty other championships for me to come and kill.

‘Obviously I was not my normal self, but it has been quite a journey, so I’m really proud. The most frustrating thing is I was in the shape of my life – and I can say that with my hand on my heart.

‘If you had asked me six weeks ago, I was confident I was going to win this entire thing. 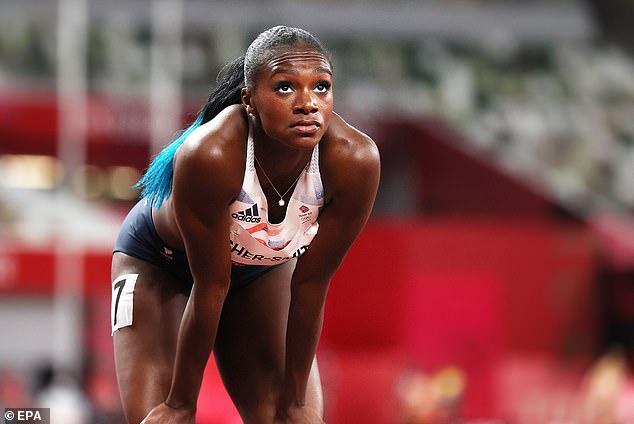 ‘I knew every part of my race – my start, transition and finish. They were better than some of the fastest women in the world.

‘It doesn’t change the calibre of the athlete that I am and I know that if I want to showcase that I just need a few more weeks of power training, a bit more speed endurance to fill that gap of when I was trying to walk again.’

She added: ‘The last few weeks of my athlete life have been absolutely insane.

‘I wanted to come and be completely upfront with everybody on my form and life and just what has happened.

‘I pulled out of both Stockholm and Gateshead because in the trials final, I actually pulled my hamstring at 60m, I tore it pretty bad and I was initially told in Manchester that it was a rupture and that I would require surgery and it would take three to four months to get back.

‘It’s been a lot to deal with because quite frankly, with that diagnosis, I just can’t go to Tokyo, so we had this whole statement ready to go but then I thankfully went and got a second opinion and it was a slight misdiagnosis – even though there was still a tear, it wasn’t a rupture, my hamstring was still attached, so we turned over every single stone to make sure I can stand on the line.’

Confirming she was pulling out of the 200m, Asher-Smith added: ‘I am going to pull out I just had the chat with John. Because as a reigning world champion, I was in such good shape, you know the Olympic champion is not too much of a further step. 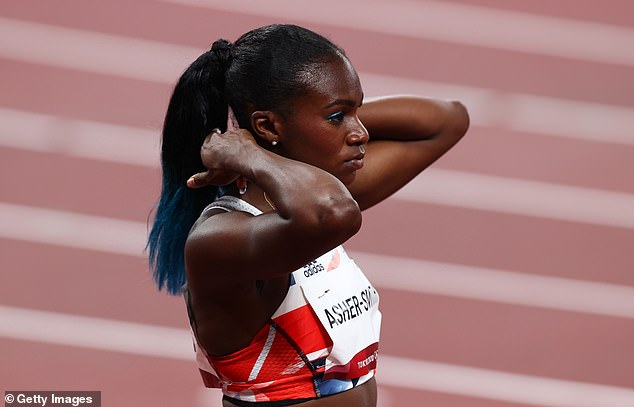 ‘But because of the journey and having three weeks off running, a week running slowly and then the last week trying to get things going and hope for the best.

‘I’m really proud to be able to execute my races and get to this point but when you’re talking about the standard I want to be at and know that I’m capable of there are plenty more championships for me to come and kill.

‘We’re in the middle of a four to five year cycle. And yeah, I got a hamstring tear at the most inconvenient time but it doesn’t change the calibre of athlete I actually am.

‘If I want to showcase that I needed a few more weeks of more power training and speed endurance to fill that gap to when I was trying to run again.

‘John told me it’s a no and even though that broke my heart because I am a competitor, the 200 I would do it because that’s the athlete I am. But he’s wiser than me and it’s the Olympics but there is another one.’ 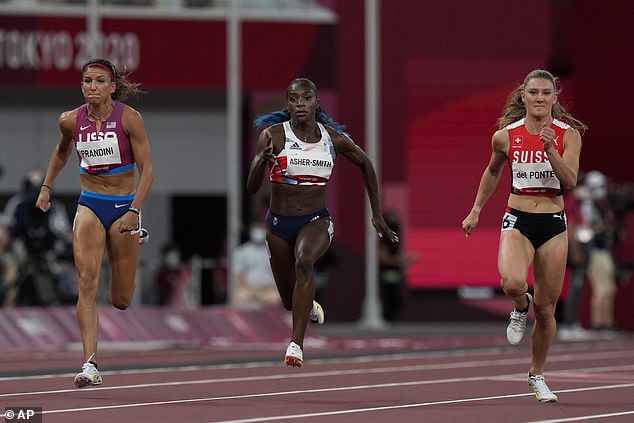 After finishing third in her semi-final, Asher-Smith was left waiting to see if she had qualified