UK Sport have defied Boris Johnson by revealing they would be willing to give public funding to transgender cyclist Emily Bridges if she is cleared to race in women’s events.

The Prime Minister entered the transgender debate on Wednesday when he said: ‘I don’t think that biological men should be competing in female sporting events.’

But despite Johnson’s calls for Bridges to be banned, UK Sport – the body responsible for distributing public money – insist they would happily hand her Lottery funding if she is deemed eligible to ride by cycling’s world governing body and is good enough to compete for Great Britain.

‘We will support every or any athlete who a sport or governing body has deemed to have future potential and is eligible to compete,’ said UK Sport chief executive Sally Munday.

‘With regards to what is said politically, we have been really clear in our guidance that it is down for sports to decide what the rules should be.’

Bridges previously received funding of at least £8,000 when she was on British Cycling’s senior academy as a male rider named Zach as recently as 2020.

After beginning hormone therapy last year, she now wants to compete in women’s events but was blocked last week by the Union Cycliste Internationale (UCI), who have convened an expert panel to review her case ahead of a decision next month.

British Cycling, who cleared Bridges to ride before the UCI’s intervention, confirmed at the weekend they would consider selecting the 21-year-old in future teams if she was eligible – including for the Paris Olympics in 2024. 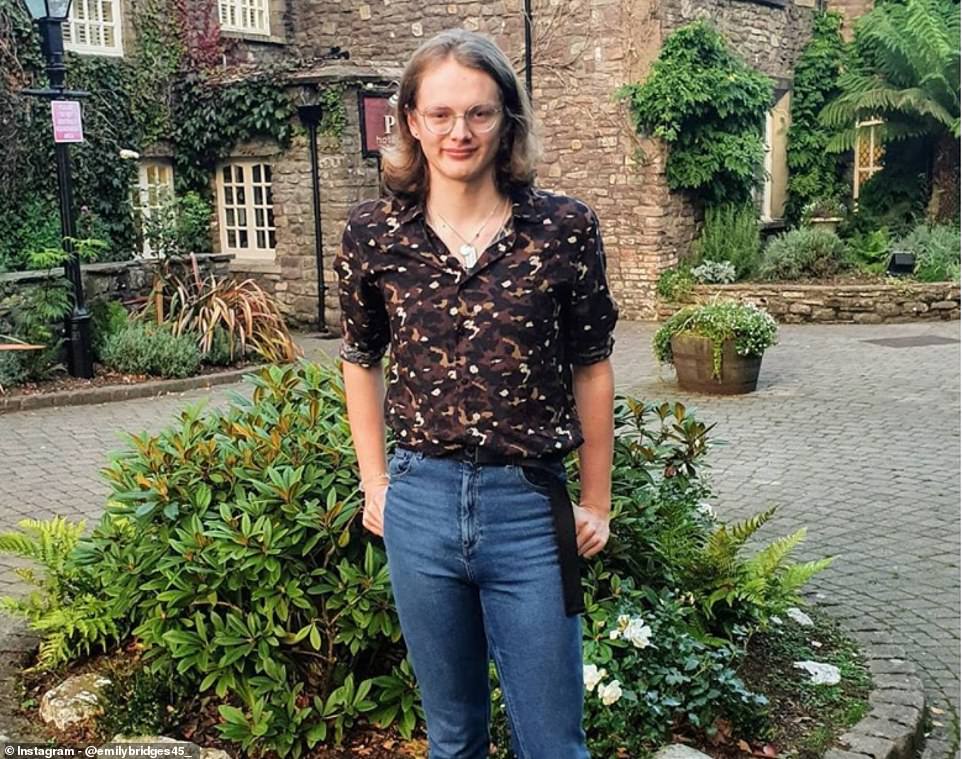 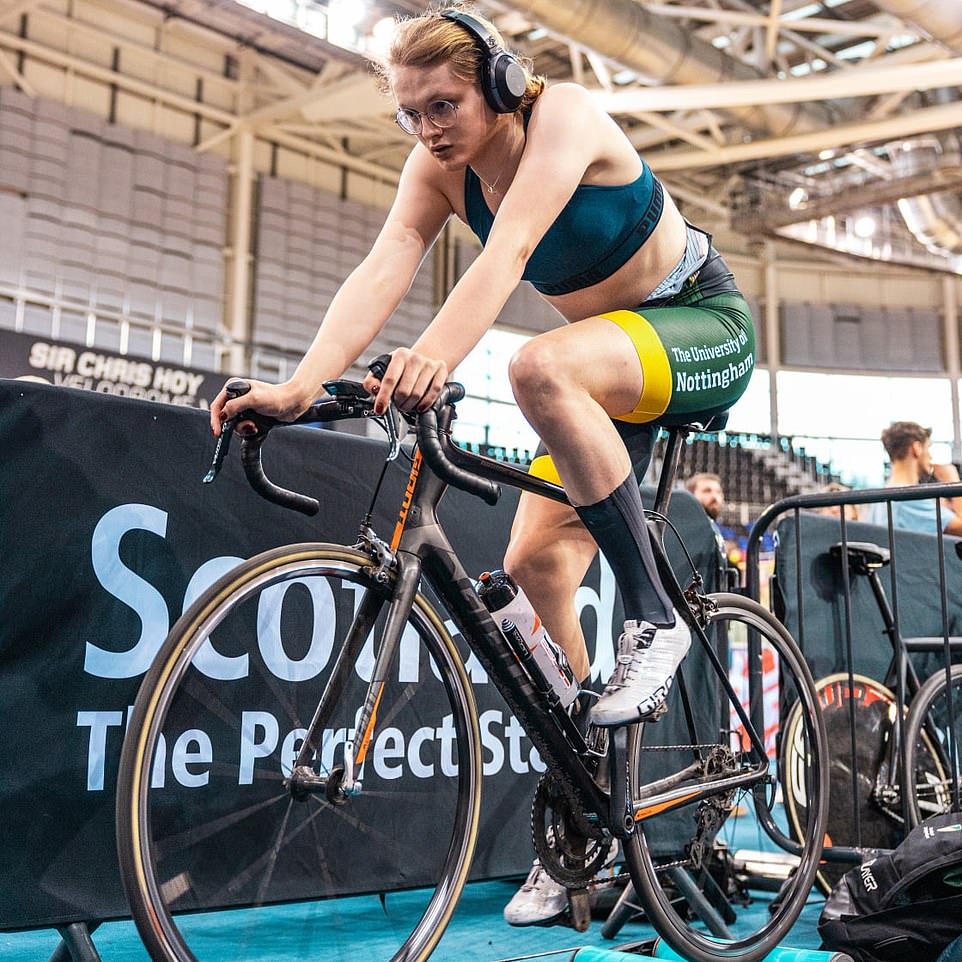 Bridges, an ex=national junior men’s champion, had been cleared to compete by British Cycling to race in women’s events 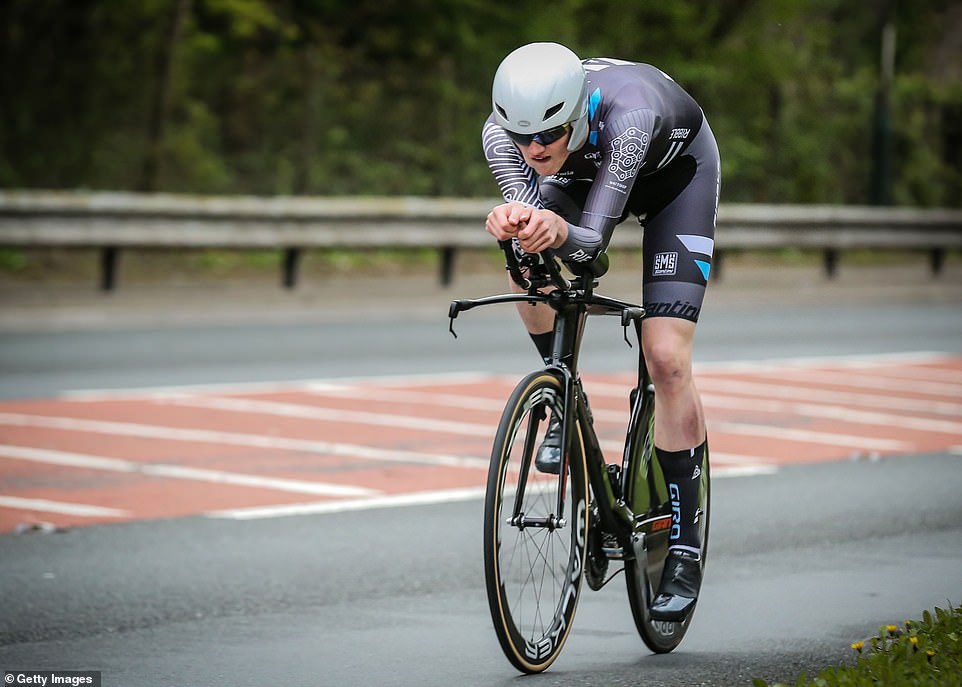 However, the UCI have blocked 21-year-old (above as Zach before she transitioned) from riding in the elite women’s events

Sharron Davies: The swimmer  says the argument about trans women competing in female events is simply a matter of ‘biology’.

Last month she wrote in the Mail on Sunday: ‘When Lia Thomas competed as a man before her transition two years ago, she was an average swimmer at university level, outside the top 500 for the National Collegiate Athletic Association.

‘Lia has been taking testosterone-suppression medication for the required last 12 months, as stipulated in the NCAA rules, but no amount of it can reverse the physical benefits of male puberty.

‘She has greater upper-body strength and significantly more muscle mass than a woman of the same weight and height. She has a greater lung capacity, better VO2 uptake, different bone density, she is nearly 6ft 4in tall and has large hands and feet that act like paddles.

She is a male competing against females and it is hugely unfair.’

Martina Navratilova: The tennis great has called for transgender swimmer Lia Thomas to have an asterisk by her name when she wins women’s races, arguing that the 22-year-old athlete’s racing against biological females is unfair and should be noted.

Navratilova, widely considered to be among the world’s greatest ever tennis players, said that the current rules, permitting Thomas to compete as a woman because she has completed the required year of testosterone-reduction treatment, were wrong.

‘It’s not about excluding transgender women from winning ever,’ the 65-year-old said. ‘But it is about not allowing them to win when they were not anywhere near winning as men.’

Dame Kelly Holmes: The Olympic gold medal has lent her support to the Fair Play for Women campaign, which insists that female athletes are at a clear disadvantage against trans rivals.

She could then become the first British trans athlete to receive funding as UK Sport give up to £28,000 of Lottery money to athletes with a ‘strong prospect of achieving or contributing to medal winning performances at the Olympic or Paralympic Games’.

‘I have huge empathy for Emily,’ said Munday. ‘She has shown incredible courage, incredible resilience and huge determination.

‘When you are at the centre of something which is of national interest, which this has become, then clearly that creates a pressure and environment on any individual.

‘We want to make sure she has the right support. We are in regular discussion with British Cycling about the support she is getting.

‘We urge everybody involved in this to have this discussion in a respectful way, but we mustn’t lose sight of the fact that this is much bigger than a single person.’

The UCI and British Cycling’s current policy allows trans women to compete in female races if their testosterone levels are below five nanomoles per litre for a period of 12 months.

However, last September, the Sports Councils – which include UK Sport – concluded that ‘for many sports, the inclusion of transgender people, fairness and safety cannot co-exist in a single competitive model’.

Asked if she thought British Cycling should review their rules, Munday added: ‘What we have seen over the last two weeks is a sport grappling with the reality of this situation as it enters to the top level of domestic sport and how it might impact in terms of international sport.

‘We have been talking to sports about the guidance that we put out last year. We are in live discussions.

‘There are huge conversations going on as every sport starts to explore what this means for them. Ultimately, it is down to each sport to find their own solutions.

‘But our view would be if British Cycling feel that they have different information and evidence available to them from when they made their policy, then it is appropriate for them to look at that policy again.’

The 24/7 ‘Sport Integrity’ hotline goes live next month and enables athletes to report incidents of abuse, bullying, harassment or discrimination in Olympic and Paralympic sports. 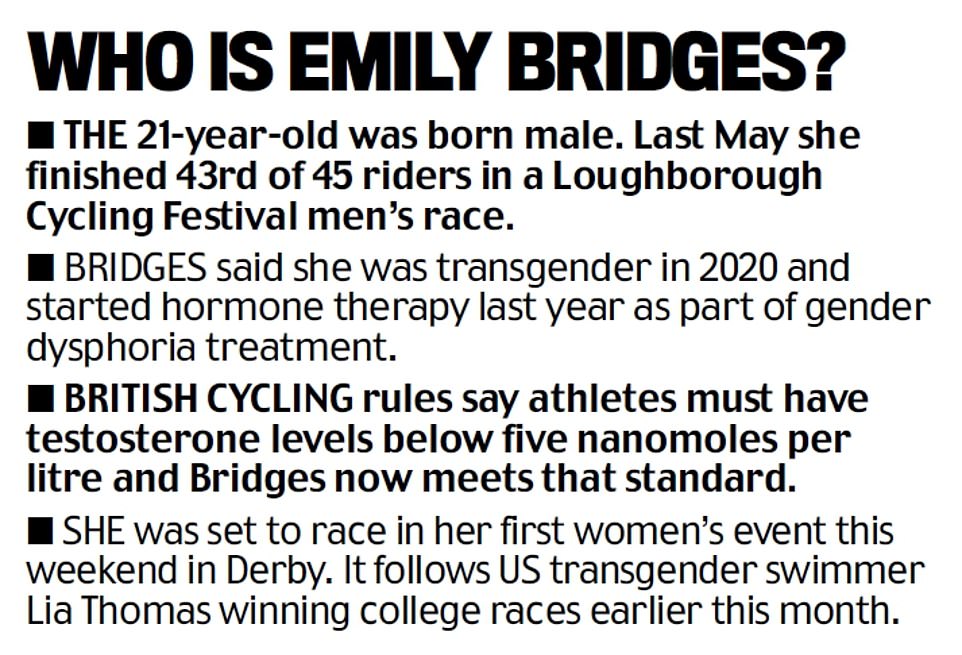