Woodson joined ESPN as an NFL analyst in 2005 and worked across ESPN programming including NFL Live and SportsCenter. He also participated in the network’s coverage of the Super Bowl, NFL Draft and training camp.

Tuesday will be Woodson’s last day before he focuses on commercial real estate in North Texas, he said.

“After 14 years w/ @espn, I have made the decision to now focus on my commercial real estate business” Woodson tweeted, in part. “Before I leave Bristol on Tuesday, THANK YOU to everyone at ESPN and especially our @ESPNNFL team!”

After 14 years w/ @espn, I have made the decision to now focus on my commercial real estate business @esrp_cre in Frisco, TX. Before I leave Bristol on Tuesday, THANK YOU to everyone at ESPN and especially our @ESPNNFL team! https://t.co/2rfhO3tQLIhttps://t.co/n2Vyx8Dktn

Woodson spent his 12-year NFL career with the Cowboys, totaling 951 regular-season tackles, 23 interceptions, 12 forced fumbles and 11 fumble recoveries from 1992-2003. The Cowboys drafted him in the second round (37th overall) of the 1992 NFL Draft, and the team inducted him into its Ring of Honor in 2015. 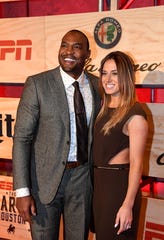 Former Cowboys safety Darren Woodson and wife Tiffany pose for a photo on the red carpet at the ESPN the Party event in the Houston arts district. (Photo: Kirby Lee, USA TODAY Sports)

“Darren’s longevity as an ESPN analyst the past 14 years speaks to his passion for football and how adept he is at sharing his knowledge of the game,” Markman said in a statement. “Our NFL team will miss him moving forward but we wish him all the best as he focuses on his real estate business back home in Texas.

“We also look forward to one day celebrating him in Canton when he is recognized for his Hall of Fame playing career.”

While working at ESPN, Woodson explored Dallas-area businesses including a commercial real-estate venture, ESRP, in Frisco, Texas, where Cowboys headquarters is located. Clients include UPS, 7/11 and Mattress Firm, according to the company’s website. Woodson serves as an executive vice president.