The 2018 Tour de France winner, Geraint Thomas, has raised more than £340,000 for the NHS after spending 36 hours on his turbo trainer over three days.

Thomas completed three 12-hour stints on his bike, all from his garage in Cardiff, on Wednesday, Thursday and Friday to mirror the shifts of medical workers fighting coronavirus on the frontline.

He covered the virtual equivalent of more than 400km a day, and was certainly feeling the effects this weekend.

“I’ve been struggling to walk up the stairs,” said Thomas, who had predicted the ride would be tougher than the Tour de France.

“On the third day, it was hard to sit on the saddle for the last three hours. That took all my concentration, I didn’t realise how sore my legs were, and my back and my neck.

Done! And over £300k raised 👀 thank you everyone for your support and donations, they kept me going 💪🏼 pic.twitter.com/g6JMN1LGBR

“I knew it was going to be hard, but I didn’t really think about it too much. After the first day I definitely wasn’t looking forward to the next two days because it was just so hard.

“The first day I was running off adrenaline, I enjoyed that, but the second and third day not so much. But I definitely enjoyed finishing, that was a massive sense of achievement.”

Having rewarded himself with a bottle of his own branded beer after the first two rides, Thomas popped a champagne cork at the end of the final stint, but it was not a drink he wanted most.

“I’ve never enjoyed showers as much as I have the last three days,” he said. “After 12 hours sweating away on a turbo, there’s no better feeling.”

Thousands of riders, from fellow professionals to Team Ineos principal Sir Dave Brailsford to amateurs at home, joined Thomas for two-hour stints of his ride via online platform Zwift, helping keep the Welshman sane as he spent 36 hours staring at his garage wall.

“I was surprised by how many people supported it,” he said. “All the donations were a massive surprise. I thought £50,000 was a decent target so to get over £330,000 is unbelievable.” 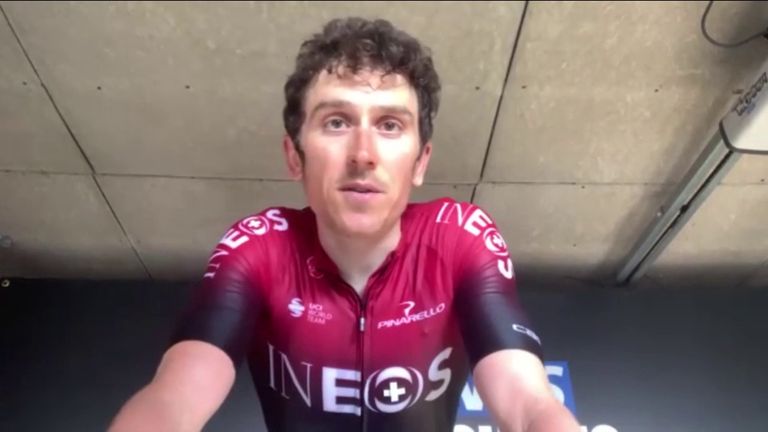 Thomas is now planning a few days of rest and relaxation before getting back to the new normal he has found in lockdown.

All racing has been suspended since mid-March, with the UCI announcing this week there would no return before August.

New dates have been given for the Tour de France, now two months later with a start date of August 29, and while nothing is set in stone in these uncertain times, that offers a huge carrot for riders to keep working.

“Some days you can wake up and you are motivated and go do your own ride, train,” Thomas said.

“Other days you wake up and are a bit like: ‘What am I doing this for?’ It’s so weird not having that exact (target).

“I started racing when I was 14 so you have always known what day you would be racing and what you are going for. That is the hardest bit by far.

“The diet is also hard when you are sat in the kitchen and the fridge is 10 metres behind you, and you know what is in it.”

But there are upsides too, as Thomas enjoys some unexpected time with his wife Sara and six-month old son Macsen.

“I have had the chance to go out for a walk with Macs in the pram and my wife,” he said.

“When I am off in October, the weather is not really that great in Cardiff at that time of the year. I don’t get to do that too much.

“I get to spend time with him. It has been a lot busier than I thought it would be to be honest. A six-month-old certainly keeps you occupied!”