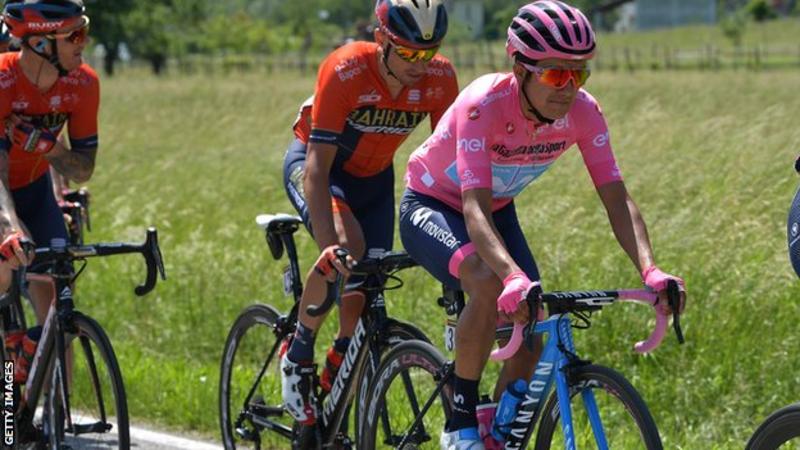 Colombia’s Esteban Chaves claimed victory on stage 19 of the Giro d’Italia with a superb finish to escape a 12-man breakaway on the climb to the finish at San Martino di Castrozza.

The Mitchelton-Scott rider, 29, was rewarded for repeatedly attacking, with Italy’s Andrea Vendrame and Portugal’s Amaro Antunes in second and third.

Richard Carapaz finished with the other leaders to retain the Maglia Rosa.

The script had appeared set for home favourite and second-placed Italian rider Vincenzo Nibali to launch an attack on the pink jersey.

But unlike the drama of this stage in 2018, when Chris Froome’s devastating solo attack turned the race on its head on his way to winning in Rome, there was little movement at the top of the general classification.

Astana’s Miguel Angel Lopez tightened his grip on the best young rider’s white jersey with a late surge but remains sixth overall, with the main contenders coming home together.

That left the attention on Chaves, who took a break from cycling last season after being diagnosed with the Epstein-Barr virus.

He finished second in the Giro in 2016 and showed signs he was returning to form with a second-placed finish on stage 17 two days ago.

And after forming part of a 12-man breakaway he exhibited his strength in the mountains with a series of attacks that splintered the group and carried him to victory.

“It’s unbelievable. It’s a lot of work, all my family, team and friends know how hard I have worked,” he told Eurosport.

“The climbs today showed that with how many times I attacked. I was attacking, attacking and attacking until the finish line. I am really happy, I can’t describe how I feel in words.”

With two stages remaining, Ecuadorian Carapaz remains on course to become only the second South American to win the Giro.

His Movistar teammate, Colombia’s Nairo Quintana – who is not competing in Italy this year – was the first in 2014.

Carapaz, 26, finished fourth in the Giro in 2016, but will face challenges from four-time grand tour winner Nibali and Primoz Roglic on Saturday’s 194km stage from Feltre to Croce D’Aune-Monte Avena.

A testing 7.3% incline into a summit finish with 4000m of climbing on stage 20 may prove pivotal before the three-week race concludes with a time-trial in Verona on Sunday.