Aggrieved swimmer Madeline Groves has made contact with Swimming Australia and is prepared to outline the issues that have put the sport under the spotlight during the Olympic trials in Adelaide.

Swimming Australia confirmed it had received communication from Groves on Tuesday evening, marking the first time the parties have communicated since Groves social media posts on the eve of the trials created a firestorm regarding the treatment of female athletes and issues like body shaming. 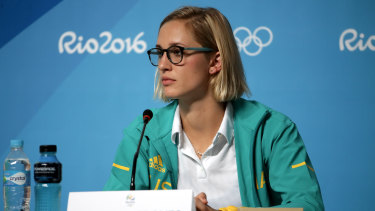 Groves had previously kept her distance since her initial posts despite pleas from Swimming Australia for her to engage and share her concerns. That now appears to be on the cards over coming weeks as Groves prepares to meet with swimming officials in what may come as a welcome development for both sides.

The news emerged after Swimming Australia chief executive Alex Baumann and board member Tracy Stockwell fronted the media after a scheduled meeting at the SA Aquatic & Leisure Centre, which drafted a terms of reference for an all-female panel to look into a range of issues in the sport.

Stockwell said a number of high-profile candidates had already come forward and were willing to assist as the sport tries to get a handle on a series of issues that have cast a cloud across it ahead of Tokyo.

Baumann also said Swimming Australia had failed to adequately communicate its complaints procedures, which allow athletes to raise concerns via the Australian Institute of Sport and Sport Integrity Australia should they not want to work with the governing body.

“Swimming Australia is committed to a zero tolerance approach to innappropriate behaviour across any level of swimming associated with our organisation,” Baumann said. “In addition, we acknowledge the complaints process should be easily accessible.

“What has happened is we haven’t communicated it comprehensively. I don’t think people know what they have to do and we admit that.”

Baumann said he couldn’t comment on any specific cases or complaints, either current or historical. Media reports have suggested at least one coach on deck at the trials in Adelaide has dealt with complaints from swimmers in the past.

Whether those complaints will be revisited will likely be part of the remit of the independent panel, which could be formed as early as next week.

Earlier in the day, former Swimming Australia chief executive took to Twitter to express her disappointment with aspects of the male-dominated sport.

“The only people who don’t believe there’s a problem are those benefiting from the system as it is,” Russell tweeted. “Those in charge of sport (men) have long focused on fixing women to fit. It is indeed a broken boys club and there will be no genuine cultural integrity in sport until the system is fixed, not women.”

Russell criticised the federated structure of many high performance sports in Australia, including SA. “If we want to be the best in the world, it has to start with the systems we use,” she said.