Jarvis, Opetaia can take title path after signing up for new series

Leading promoter Dean Lonergan wants to take rising NSW fighters Brock Jarvis and Jai Opetaia on the same path as former world champion Jeff Horn after signing the pair to his promotional stable ahead of a new televised boxing series beginning next weekend at the Hordern Pavilion.

Jarvis (17-0) and former Olympian Opetaia (18-0) are the showpiece additions to the National Boxing Series, which will air on Fox and feature seven rounds until November 2020. That programming will be interspersed with Horn pay-per-view fights on Main Event beginning with the Michael Zerafa rematch in December. 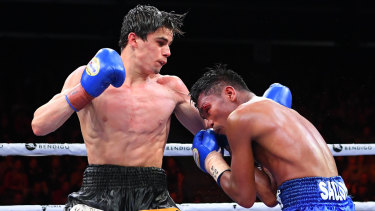 Brock Jarvis (left) won a tough bout against Ernesto Saulong during their ‘Battle of Bendigo’ bout.Credit:Getty

Super bantamweight Jarvis trains under Jeff Fenech in Sydney and has a touch of class about him while Opetaia, a cruiserweight from the Central Coast, has long been regarded as a boxer with enormous potential.

Lonergan believes both can challenge for world titles within four or five fights and the dream scenario would be to put them both on a card and feature it as a double-header in Sydney, Newcastle or on the Central Coast.

Horn was plucked by relative obscurity by the then-Duco Events and set on a path to a welterweight world title with an unforgettable win over Manny Pacquiao. Lonergan's company is now called D&L Events but he hopes he can have similar outcomes for two of his newcomers, intending to build their opposition steadily rather than have them coast for a ranking then be out of their depth when the shot eventuates.

"We identified the talent about a year ago. It’s taken some time to slowly get them over the line, get them comfortable with the deals. And to make sure they understand that we are going to pay them a lot of money to get them to where they need to be," Lonergan said. 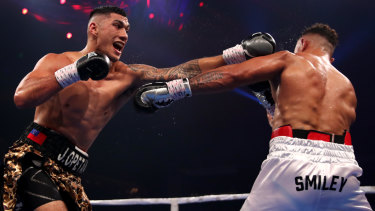 "You have to have the talent. If you don’t you can’t go anywhere. I think that Brock Jarvis can go all the way to a world title fight within the next four or five fights. The same goes for Jai Opetaia.

"The only way you can do that is build them as stars and the National Boxing Series wants to get these guys in the media on a regular basis."

The NBS will take place across NSW, Queensland and Victoria but the Sydney market remains the promised land for boxing, with the rise of Jarvis part of the plan to help spark the fight game in the Harbour City. Tim Tszyu, who may yet fight Lonergan's stable star Horn, has also helped on that front.

"It’s really important. Sydney is the economic powerhouse. It’s important that each of these guys stand out in their regions. There’s a lot of work to do to bring more attention to boxing. We want to see our guys healthy and send them out wealthy."

The series will also include the use of the infrascanner, a portable device that can detect a brain bleed within minutes. It will be in place from the second card onwards.