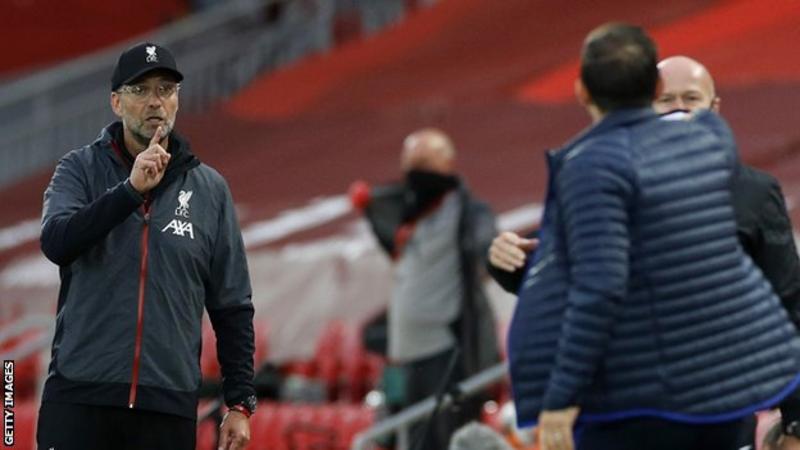 Liverpool boss Jurgen Klopp says his staff were not arrogant in their 5-3 win over Chelsea and that Frank Lampard has to learn to “close the book” on touchline arguments.

A heated exchange took place between Chelsea boss Lampard and the home bench when the Reds won a free-kick from which Trent Alexander-Arnold scored.

“We are not arrogant. We are pretty much the opposite. You cannot throw that at our bench,” Klopp said.

Lampard said he “regrets” his language.

Klopp, whose side cantered to the Premier League title this term, says he respects the Chelsea manager’s competitiveness but was unhappy that Lampard chose to continue his complaints after the match.

“Frank was in really competitive mood, I respect that a lot. For me, after the game, it’s completely over,” he said.

“What he has to learn is to finish it with the last whistle and he didn’t do that. Speaking after the whistle is not OK.”

While Lampard apologised for his language, he does not regret the passion he showed and wanted to make clear he had no issue with how Liverpool celebrated as they were handed the Premier League trophy.

Lampard added: “I’ve seen the video. These things get replayed on social media a lot, I’ve got two young daughters who are on social media, so I regret that.

“In terms of regretting having passion to defend my team, no. I could have handled it maybe slightly differently, to keep that language in.

“I need to be clear about this: some of the reporting said that I was upset with the celebrating of the Liverpool team. Far from it, I think Liverpool should celebrate as much as they want with the season they’ve had.

“They can celebrate like they did after the game, after every goal they scored, and they will celebrate one more time with their fans when they can. I would have had a beer with Klopp after the game.

“But there were things on the line I didn’t like from their bench, not Jurgen Klopp, people behind the bench, which I felt crossed the line, and that’s what got me agitated.”