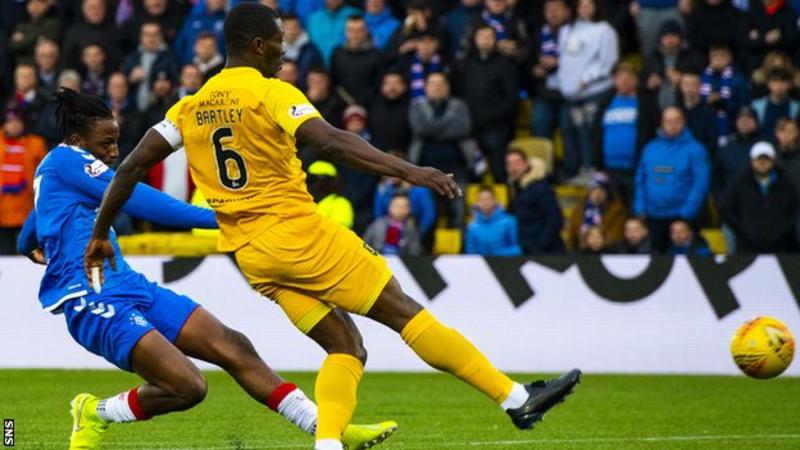 Rangers remain level on points with Celtic at the top of the Scottish Premiership after sweeping aside Livingston at the Tony Macaroni Arena.

But with Celtic matching the scoreline in their win over Motherwell, Rangers go into the international break second in the table on goal difference.

Joe Aribo – carried off on his previous visit to Livingston – stroked Steven Gerrard’s side into a first-half lead.

Alfredo Morelos added a second as the visitors eased to the points.

One sour note for the Glasgow side was Ryan Kent limping off early into the second half.

Livingston have now gone five games without a win since they beat Celtic last month, remaining seventh in the table.

“It’s the Tony Macaroni Arena they’re heading to – not Madison Square Garden,” Livingston head coach Gary Holt said in relation to less-than-complimentary comments from Rangers counterpart Steven Gerrard. The Ibrox manager had appealed for his side to be “protected” in West Lothian by referee Nick Walsh.

Whether mind games or genuine concern for his players’ welfare, the comments had riled Holt, and lit fireworks under a fixture where so much was at stake for both sides.

Livingston had the top six and a second Old Firm scalp within five weeks in their sights. Rangers’ neck-and-neck battle for the title with Celtic meant three points was everything to them.

Every foul, every 50-50 battle, was going to be under the spotlight. The first flashpoint came from Jack McMillan’s sliding challenge on Glen Kamara. Blue shirts swarmed the referee, but just a yellow card was flashed.

Then Alfredo Morelos hit the turf inside the box after Jon Guthrie’s challenge and gave Walsh another decision to make, but the Livi defender had won the ball.

Yet the early sparks soon fizzled out as Rangers enjoyed the bulk of possession and tested their hosts from distance. Ryan Jack’s early shot took a wicked deflection before being tipped over, Kent whistled another one wide after Kamara’s reverse pass.

But the deadlock was broken when Scott Arfield ran through the middle unchecked, knocked Morelos’ pass into the path of the on-running Aribo who planted it beyond the reach of Majita Sarkic from inside the box.

Sarkic’s brilliance denied Rangers a second when he leapt to his right to tip away Kamara’s goalbound shot. But he was beaten when Morelos got the advantage of a tight offside call, held off Livi’s Hakeem Odoffin, and squeezed his 22nd goal of the season into the far corner.

But as the second half wore on, despite Thursday’s Europa League exploits against Porto beginning to take their toll, the home side were unable to get at Rangers.

Jermain Defoe could have squeezed in a third but Sarkic got down low to block, then in bizarre circumstances Borna Barisic’s shot bounced under the goalkeeper but hit the post as the visitors finished with a a flurry. 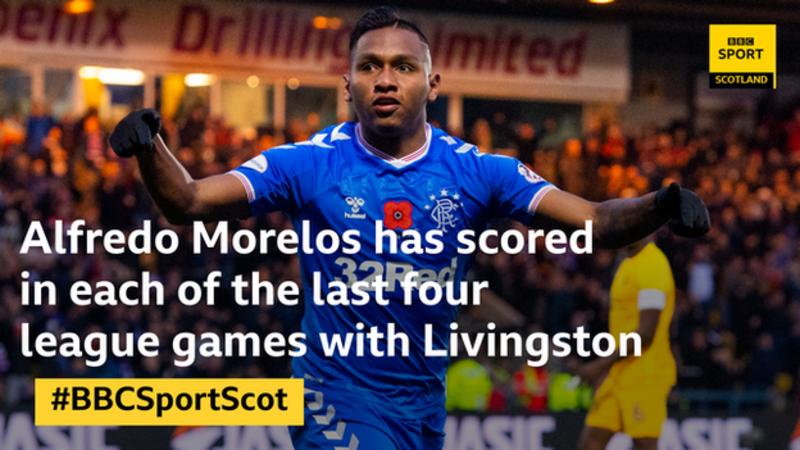 Man of the match – Connor Goldson

Five weeks ago Dykes had been the main man as Celtic fell to defeat in West Lothian. Early on Livingston tried to go direct and hurt Rangers through the middle.

But Goldson dominated Dykes, barely giving him a sniff of goal, and instead the Livi man cut a frustrated figure as Rangers looked comfortable at the back.

‘It was a mountain to climb’ – reaction

Livingston manager Gary Holt: “If we kept it at 1-0 we had a chance, but we lose a poor goal. It’s happened too easy and it makes it a mountain to climb. We need to get back at it.”

Rangers manager Steven Gerrard told Sky Sports: “Celtic are in excellent form, they’ve had a big week themselves and they’re scoring goals heavily and don’t seem to be dropping any points so it’s important we continue to do what we need to do, keep winning and staying in there.”

Borna Barisic (Rangers) wins a free kick in the defensive half.

Attempt missed. Borna Barisic (Rangers) right footed shot from outside the box is close, but misses the top right corner.

Attempt missed. Greg Stewart (Rangers) right footed shot from the right side of the box is close, but misses to the right.

Attempt missed. James Tavernier (Rangers) right footed shot from outside the box misses to the left.

Borna Barisic (Rangers) hits the left post with a left footed shot from outside the box.

Attempt saved. Aymen Souda (Livingston) right footed shot from outside the box is saved in the centre of the goal.

Attempt missed. Connor Goldson (Rangers) right footed shot from the centre of the box misses to the left following a set piece situation.

Aaron Taylor-Sinclair (Livingston) is shown the yellow card for a bad foul.

Sheyi Ojo (Rangers) wins a free kick in the defensive half.

Attempt missed. Connor Goldson (Rangers) right footed shot from outside the box is high and wide to the right.

Attempt missed. Sheyi Ojo (Rangers) header from the centre of the box misses to the right.

Marvin Bartley (Livingston) is shown the yellow card for a bad foul.

Sheyi Ojo (Rangers) wins a free kick in the attacking half.

Attempt missed. Scott Pittman (Livingston) left footed shot from outside the box is too high.

(Rangers) wins a free kick in the attacking half.

Alfredo Morelos (Rangers) wins a free kick in the defensive half.