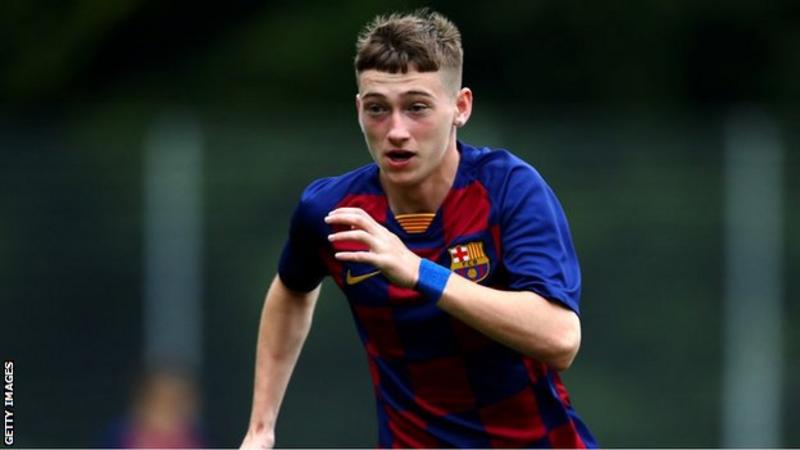 Aston Villa have signed England Under-17 striker Louie Barry from Barcelona for a fee of about 1m euros (£880,000).

The 16-year-old spent six months with the Spanish champions, who he joined from West Bromwich Albion in July 2019.

Birmingham-born Barry had been with Albion since he was six but turned down the offer of a professional contract with the Championship club.

“It sends a powerful message about the ambition of this football club,” said Villa academy manager Mark Harrison.

When Barry signed for Barca, the club described him as “one of the best young players in English football”.

However, he made just 10 appearances for the club’s youth teams after his registration was delayed, scoring two goals.

West Brom were scheduled to receive £235,000 in compensation but that money has never been paid despite the club reporting the matter to Fifa.

If Barry had gone to Villa straight from them, the fee would have been decided by a tribunal if there had been no agreement.

“We’re delighted – Louie is a local person and his family are all Villa fans, as is Louie,” added Harrison, who joined Aston Villa in September 2019 having held a similar position at West Brom.

“He is still a very young man but as he’s developed, he’s always been one player that you always recognise as having outstanding attributes. He’s got a fantastic mentality. He’s desperate to do well for this football club.

“He’s really driven, he’s got great family support, but in terms of what he can achieve, we firmly believe that he can be an outstanding number nine for this football club.”