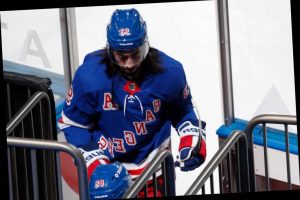 This is the Kaapo Kakko the Rangers have been looking for

There, for a few shining moments, the future of the Rangers was on display.

With just over seven minutes remaining in the third period of a reasonably entertaining game against the Bruins that was 2-2 at the time, there was Alexis Lafreniere flying down the left wing with Kaapo Kakko on the right and Ryan Strome between them.

It was Strome and Lafreniere who connected on a neat give-and-go on which the centerman was denied from the doorstep by Tuukka Rask moments before the goaltender somehow snuffed No. 16’s rebound attempt.

That sequence came just about seven minutes after Lafreniere set up Julien Gauthier off another left-wing rush before the winger was also stopped by the Finnish netminder. This was No. 13 at his best in a couple of weeks.

So good stuff from the first-overall, a good game from Kakko, and, in the first period, the first goal of Gauthier’s career in his 24th NHL game. And Alexandar Georgiev had an impressive bounce-back outing. Good stuff for the big picture.

There was more than a fair amount of good stuff throughout the evening, but not enough of it to generate a victory at the Garden. It was 3-2, B’s in overtime, when the basket-hanging Brad Marchand beat Georgiev on a breakaway at 0:36 after Pavel Buchnevich eschewed a shot off an odd-man break — this is a recording — and could not get his pass through a backchecking Patrice Bergeron with Charlie McAvoy standing his ground. Of course he couldn’t.

And there was, I suppose, good stuff from Mika Zibanejad, who declared that he felt like “my own self,” after being held off the scoresheet again despite having several glorious opportunities around the net on a night where he was at his most visible of the season.

It was the classic hockey good news/bad news night for No. 93. Good that he was getting chances. Bad that he was unable to convert any in his ninth straight without a goal. Zibanejad has one assist through that stretch, marking his most fallow period since 2017-18.

“I felt a lot better today,” he said. “Obviously the chances were there but I didn’t really capitalize on them. I just have to keep going and get a little better every day.”

Zibanejad was set up at the right doorstep by Chris Kreider’s diagonal feed on a power play 8:28 into the second but was robbed by Rask’s glove after the goaltender somehow came across to shut the open side. Indeed, Zibanejad thought the puck had crossed the line, seeming to point inside the net before briefly conferring with one of the officials when play stopped.

Maybe he thought it was in because last year it would have been in. The year before, too. But not in 2020-21. At least not so far.

And about 6:30 later, with just over 5:00 remaining in the period, Zibanejad swept in on a breakaway but was beaten again by Rask, who got the puck with his right shoulder. A year ago? Well, who knows?

Listen, if the Rangers are going to have a chance to remain relevant in the playoff chase, it is imperative that Zibanejad produces. No team can survive with a washout season from its first-line center. The Blueshirts, who were carried offensively last year by the Zibanejad-Artemi Panarin Dynamic Duo, certainly won’t be able to hang in if No. 93 continues putting up zeroes. That is true whether or not Panarin, limited to one shift on the power play in the third period after suffering some sort of lower body injury late in the second after getting tangled up on the boards with Chris Wagner, is down for any length of time.

That is not overblowing the situation regarding Zibanejad, who has all of three points (1-2) on the year. Neither is it overblowing his significance to the operation.

David Quinn, who earlier in the day had mounted a defense of his centerman, was pleased indeed with Zibanejad’s play in this one through which he and his line held its own in the match against the Bergeron-Marchand-David Pastrnak trio

“Tonight, for sure, was the guy we saw last year in a lot of ways,” said the coach. “He did a great job defensively, with his body, was on the puck and got great scoring chances.

“He wanted it and had a swagger to him tonight.”

The Rangers played with tempo following a dozy first period in which 8:18 was played without either team recording a shot on goal. The second period was wide-open and the third was a battle. The Rangers held in.

But they got both goals from the fourth line, Gauthier getting one and Kevin Rooney the other. Those are the only two goals the Blueshirts have scored over the last two games.

So more is needed. And while Zibanejad took a step forward, production is needed from this upper-echelon first-line center.