Newsom managed to fend off challenges from Elder and a field of other Republicans to remain in office to complete his term.

With Tuesday being decision day in the recall election, Piazza, 53, a former star with the New York Mets and Los Angeles Dodgers, posted a 44-second video on Twitter endorsing Elder, a conservative talk radio host who was the Republican frontrunner. 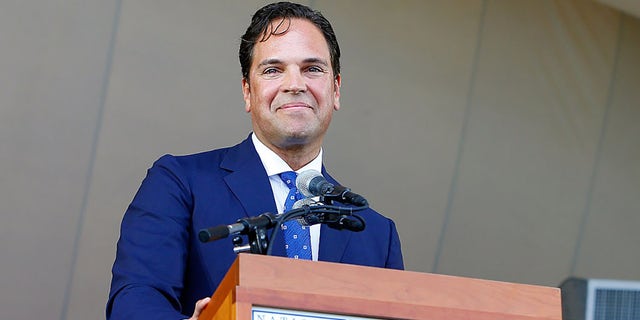 “Get out and vote to recall Gavin Newsom and put Larry Elder in Sacramento,” Piazza said in the video. “When I got to L.A., that’s all my friends talked about was moving to California. And now all everyone talks about is moving out of California. Larry Elder wants to change this. He’s a man who deeply loves California and will bring back the California dream. Vote for Larry Elder.”

“All everyone talks about is moving out of California. Larry Elder wants to change this.”

Piazza, a noted supporter of former President Trump, added that, if Elder were to win, Piazza would personally return to Dodger Stadium for the first time since his MLB career ended to thank “all the Dodgers fans who voted for him [Elder] and say hi to a lot of friends I haven’t seen in a long time.”

However, his efforts appeared to be all for naught, as Newsom was projected to remain California’s governor and Elder conceded defeat late Tuesday.

Newsom, who was overwhelmingly elected governor in 2018 in the heavily blue state, faced a recall sparked last year mainly over accusations that he mishandled the state’s response to the coronavirus.

Voters were asked two questions on the Newsom recall ballots. The first question was whether the governor should be removed from office. If more than 50% supported removing Newsom, the second question offered a list of 46 candidates running to replace him.

Ballots were mailed last month to California’s estimated 22 million registered voters and needed to be postmarked or handed in by the time the polls closed, at 8 p.m. PT.

Piazza, regarded as one of the greatest offensive catchers in baseball history, was a 62nd-round draft pick by Los Angeles in the 1988 MLB Draft. He played seven seasons with the Dodgers, before being traded to the Florida Marlins, who later flipped him to the Mets.

He helped New York reach the 2000 World Series, though the Mets would end up losing in five games to the New York Yankees.