Home » Sport » Mike Tyson will ‘seriously hurt’ Roy Jones Jr. in their exhibition, the boxer who knocked Tyson out in his 2nd last pro fight says

Mike Tyson will ‘seriously hurt’ Roy Jones Jr. in their exhibition, the boxer who knocked Tyson out in his 2nd last pro fight says 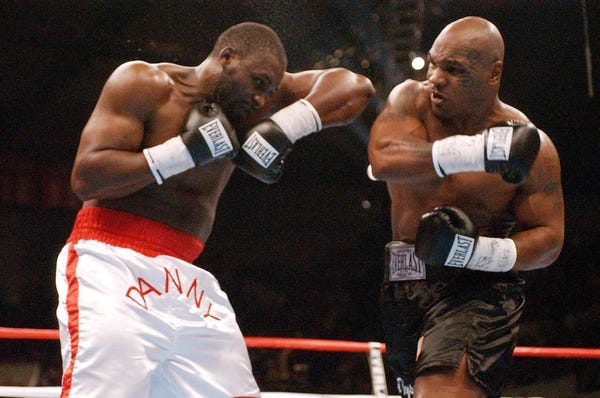 Mike Tyson will "seriously hurt" Roy Jones Jr. when they meet on November 28.

That's according to Danny Williams, the last fighter to have knocked Tyson out before his retirement in 2005.

London-based Williams, known as the "Brixton Bomber" in his heyday, put Tyson out for the count at the Freedom Hall in Louisville, Kentucky in July 2004, scoring himself the most memorable victory of his career.

Tyson fought just once after, losing again to Kevin McBride a year later, however is coming out of retirement later this year to take on Jones Jr. in an eight round exhibition bout.

Williams, now 47, on the other hand, has continued to fight since, most recently losing to 40-year-old boxing debutant and former kick boxer Sergei Kharitonov on Friday, after which he announced his retirement, and admitted he has been "finished" for years in the fight game.

Following the defeat, Williams was asked by RT Sport how he think Jones Jr. will fare against Tyson in November, to which he said: "I think Roy is going to get seriously hurt. [He's] a natural middleweight."

Williams is not the only ex-boxer backing Tyson to best Jones Jr.

Nigel Benn, a former two-weight world champion, says he believes Jones fears Tyson, and has urged the 51-year-old to cancel the bout.

"If you listen to the way Roy is talking, there's a lot of fear there," Benn said earlier in September. "I would be. Look who he's getting in the ring with.

"He's talking about how big and powerful Tyson is — he's not just hyping the fight — it's the truth. I wouldn't get in the ring with him."