A NAKED Scottish football fan was today led away by cops in Hyde Park after thousands of Scots descended into London ahead of tomorrow's game.

Multiple Met Police officers were spotted surrounding the streaker before dragging him away from the crowd of onlookers. 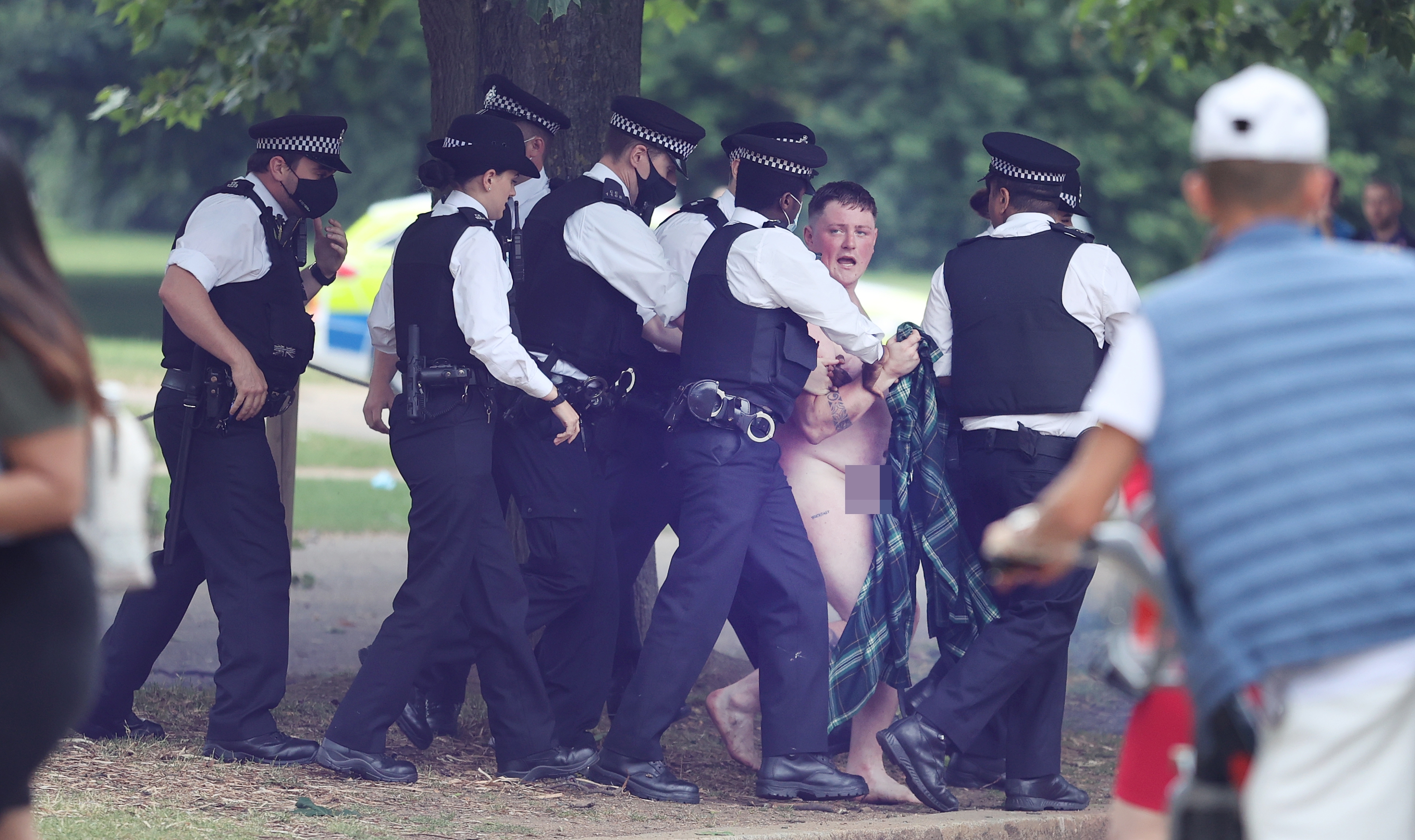 Dozens of Scots headed to London's Hyde Park this evening after arriving in the capital today.

Michael Lynch, 34, who donned a traditional glengarry hat for the trip down from Dundee said: “The key thing is if we score, we have to score, in two pints time we’ll definitely win.

"“As long as we can cheer then were happy, Scotland will score first." 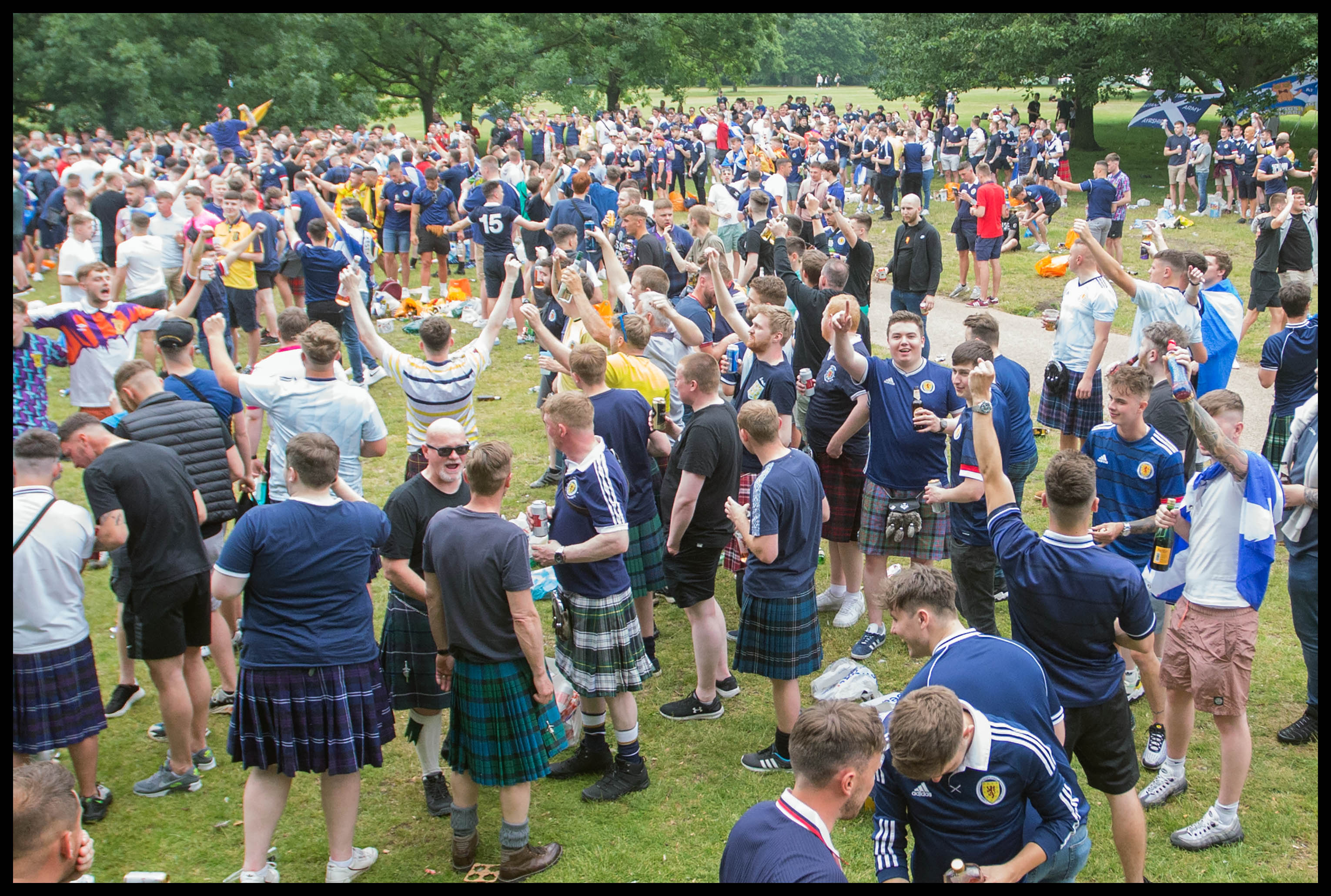 The fans are planning to descend on pubs in the capital en masse to watch the Group D clash at 8pm tomorrow.

And the kilt-wearing Scots got the party started early as they belted out chants in a sea of blue and white in London today.

Scotland have been allocated less than 3,000 tickets for the sellout 21,500 qualifier at Wembley.

But between 6,000 and 20,000 Scottish supporters are reportedly planning on making the trip across the border.

All trains from Glasgow and Edinburgh to London this morning were sold out.

The oldest fixture in international football is steeped in history – with the last time England took on the Scots in the Euros way back in 1996.

Gazza marked his winning goal with his infamous dentist chair celebration as the Three Lions went on to win 2-0.

Wembley historically hasn't been a happy hunting ground for Scotland – with England beating the Auld Enemy 18 times in 32 games at the stadium.

The last time the two teams met at Wembley saw Daniel Sturridge, Adam Lallana and Gary Cahill steering England to a 3-0 win for the World Cup qualifier in 2016.

But the thousands of singing Scotland fans spilling out of London stations today don't seem too concerned by the stats.

And it was a case of in John McGinn we'll win as supporters tipped the Villa midfielder to sneak a couple past Jordan Pickford tomorrow. 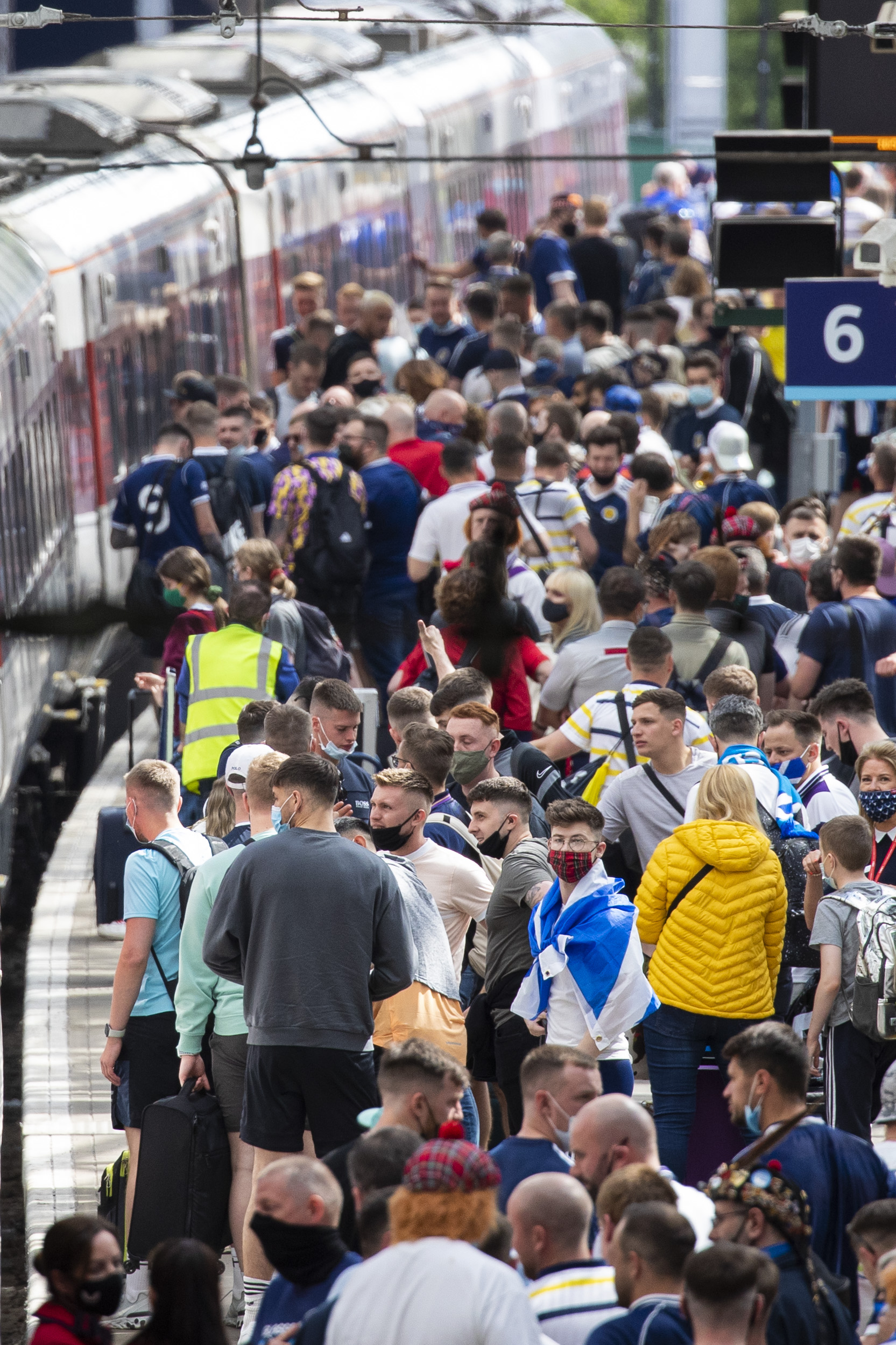 Archie Gardiner, 20, told The Sun Online: “Its nationality that matters. A matter of pride.

“Everyone has booking for pubs to watch the game of they’re not going.” 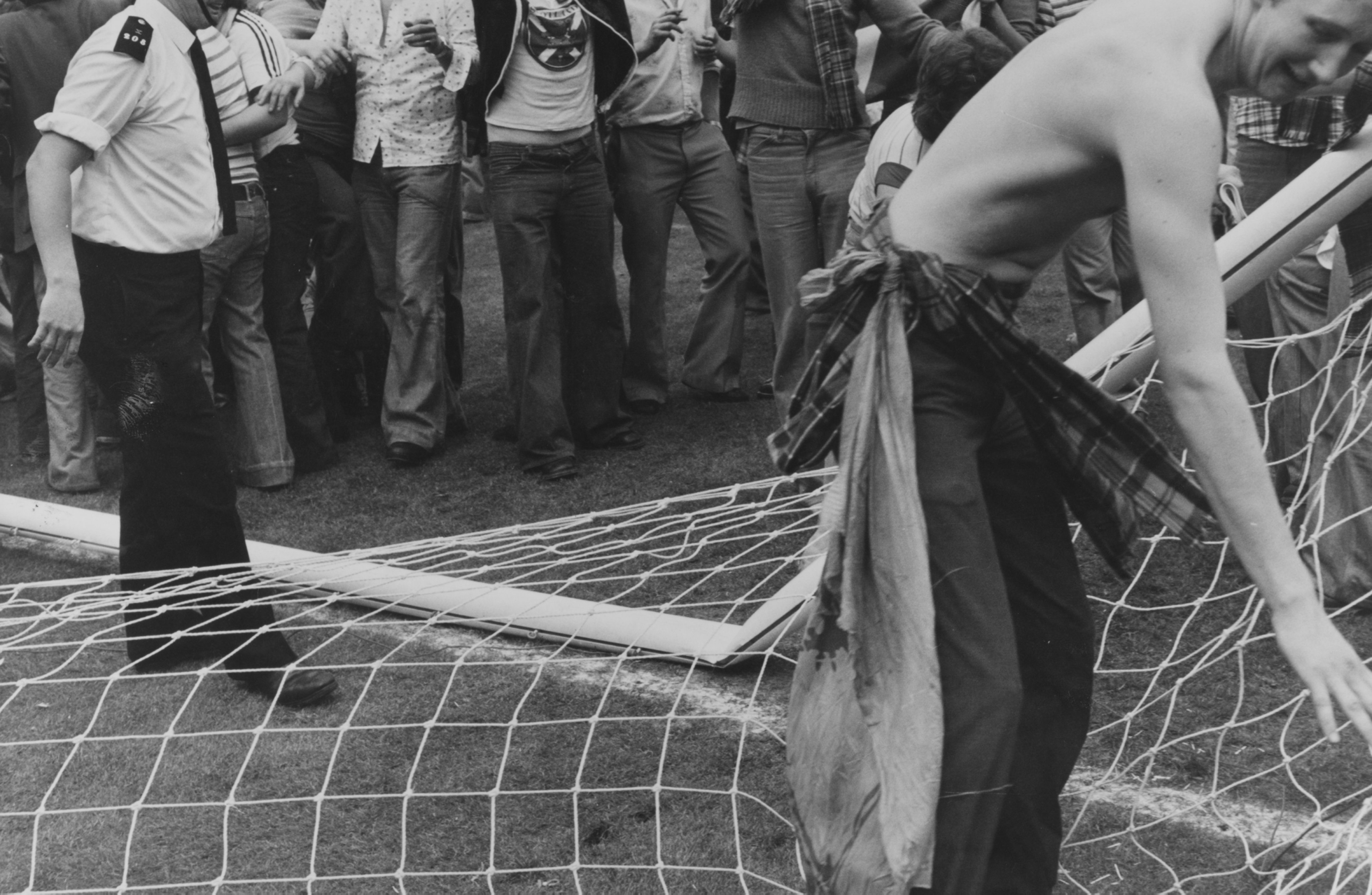 Others showed their pride and said they would be skipping back over the border when Scotland end their Wembley curse.

Andrew Burnett, 52, who almost got arrested before the day of the match after climbing a tree at Euston during the festivities, added: "If I’m dreaming, and I’ve got my lucky socks on I think we’ll win. 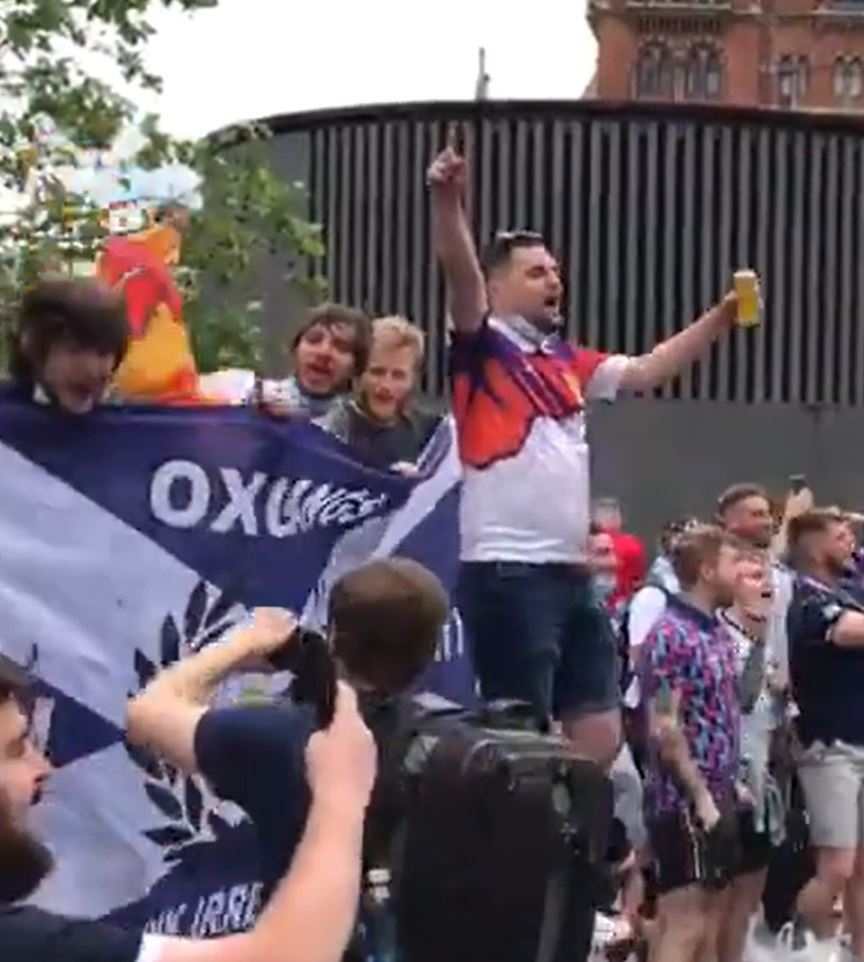 However, there is rising concern about the lack of Covid-secure fan zones for the match.

Scotland fans had been urged not to travel without tickets or having arranged a safe place to watch the game.

The Met's Deputy commissioner Sir Stephen House said: "We are expecting a large number of fans from Scotland to come down for the England v Scotland match.

"Inevitably people will attend who don’t have tickets. We have significant extra resources on duty to deal with any disorder that may occur.

“I would urge all fans to behave properly and to control their drinking…. To fans from Scotland, if they don’t have a ticket, they should not come.”

But defiant Scots said they have booked out pubs in London to watch the historic clash.

Rhuri Paton, 28, from Stranraer, said: “Some of us have booked into a pub, we’re gonna make some friends.

“Loads of fans have booked near Hyde Park, its where we’ll go if we win.

“We have to get a boat to Belfast and then make our way over.

“I reckon England will win, realistically, I went to the game before and we didn’t play that bad.

“We’ve not been here for 23 years so we’re just happy to be here.

“If England have an off day then you never know!”

While Kenny Ford, 24, who was celebrating his birthday on the train down to London, said: “We’re gonna watch it in a pub, near Hyde Park.

“As long as we score first against you I don’t care.”

London mayor Sadiq Khan has said there will be nowhere for fans to gather, in line with current Covid guidelines.

He warned: "I am today urging all fans to only come to London if you have a ticket for the match or if you have arranged a safe place to watch it from, in compliance with COVID-19 guidelines.

“I want to be completely clear that Scottish fans will not be able to access their traditional Trafalgar Square base as it will be used as a socially-distanced Fan Zone for key workers who are helping our city through the pandemic.

"Due to COVID regulations there are no alternative sites for fans to gather in large numbers in central London."

Scotland lost their first qualifier to the Czech Republic 2-0 on Monday, the day after England beat Croatia 1-0.

The teams last played competitively in the 2018 World Cup qualifiers, with England winning 3-0 at Wembley and the teams drawing 2-2 at Hampden.

Scotland and England played each other in a friendly at the end of each season for decades.

But the traditional joust was scrapped over repeated crowd trouble.