Home » No experience? No worries: Netball goes beyond Australia in search of CEO

No experience? No worries: Netball goes beyond Australia in search of CEO

Netball Australia is casting the net far and wide in its search for a new chief executive.

The game’s governing body will consider people with no netball experience and no sporting experience. The successful candidate doesn’t even need to be in Australia.

NA began its search for a new boss this week and has engaged international executive recruitment firm Egon Zehnder to assist in the hunt. 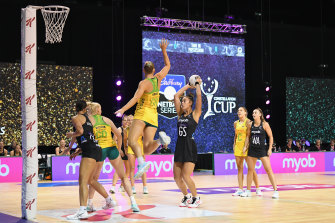 Despite having the world’s best netball side, NA chairman Paolina Hunt said the governing body was eager to expand the search beyond Australian shores. Credit:Getty

The move comes as Netball Australia looks to streamline its operation from the grassroots to the national side. In the past, Super Netball has been a different entity to Netball Australia, but the two organisations will now be one.

The move will likely result in the disbanding of the independent Super Netball Commission at the end of the 2021 season.

“It’s not really cost cutting, it’s more that COVID forced everyone to look at how they were doing things in terms of resourcing and stretching people,” Hunt said.

“We are just focusing on the three or four things that are really going to make a difference to the game, instead of trying to do 10 or 12 things, which is what we’ve always tried to do.”

The job ad for the NA chief executive, which was released this week, calls for an “exceptional individual” who can implement “transformative change”.

“It just makes sense for us to keep it as broad as possible.”

The biggest challenge netball continues to face is converting players into watchers of the game.

The new boss will also be under immediate pressure, with the Diamonds having had a string of losses recently.

“We’ve lost the trophies from the cupboard,” Hunt said. “But we are still ranked No.1 and we’re the best team in the world.

“Netball really is at the point where we’ve got all the foundations in place.

“Their job is to harness the footprint, because we have this massive national footprint of participants. But we haven’t yet captured the hearts and souls of our grassroots to become tribal netball fans.”