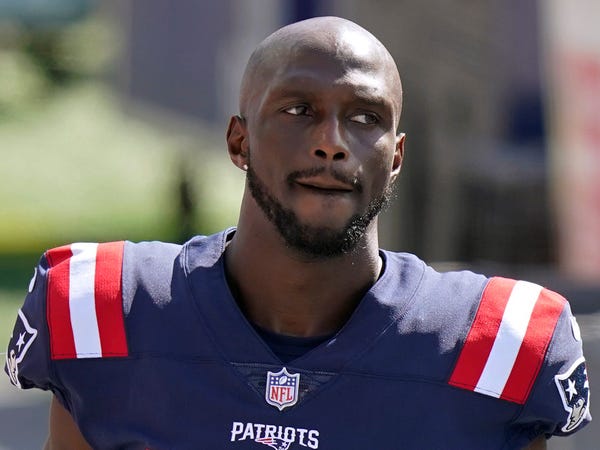 New England Patriots cornerback Jason McCourty sharply criticized the NFL over the weekend for its handling of the season as the league attempts to play through the COVID-19 pandemic.

On Saturday, McCourty called out the league for putting an emphasis on playing games over player safety.

"I think outside of here, the people that don't have to walk in our building — whether it is the league office, whether it is the NFLPA — they don't care," McCourty said, per ESPN. "For them, it is not about our best interest, or our health and safety, it is about, 'What can we make protocol-wise that sounds good, looks good, and how can we go out there and play games?' I think what I kind of learned personally throughout this situation is it is going to be up to us as individuals in this building to just really take care of one another."

McCourty cited the decision to have the Patriots play on Monday night of Week 4 just two days after quarterback Cam Newton tested positive for COVID-19 as particularly questionable. Later that week, after the game had been played, fellow Patriots cornerback Stephon Gilmore also tested positive.

"If you get a chance to talk to the NFL or the NFLPA, I'd greatly appreciate you bringing up that point and letting them know," McCourty said when asked about the rescheduled game. "That's something we talk about, and we are dealing with it. We're moving forward, and it's obviously in the back of our mind.

"That's why we're just trying to do everything we can — we're distanced. Even today, while we were in, we're totally distanced, we all have masks on, we all have the Oakley shields on, and we have a mask on underneath our helmet. We weren't in the building, really, at all today. So we're doing the necessary things to stay as safe as possible.

"But without a doubt, that's a thought — the same way you guys are sitting there thinking about it like, 'Hey, they're getting on a plane on Monday [to go to Kansas City], well, those days don't really add up with the incubation period.' That was the same question we were asking our union before we head out there."

Despite numerous teams dealing with positive COVID-19 cases, including an outbreak that has affected as many as 23 players and staffers in the Tennessee Titans locker room, the NFL has pushed forward with its season with little interruption, opting to continually shift the schedule of future games rather than hitting the pause button or adding a week or two to the end of the season.

On Sunday, eight more games were rescheduled, shuffling the season to the point that it is unrecognizable from where it began for some teams. While the year can carry on as planned for now, with each change, the league gives up a little more leeway that can't be used should another team report a positive case that requires a game to be pushed back.

Given the public response that McCourty gave regarding the league's handling of the schedule — a sentiment that he is surely not alone in amongst players — an extra week may be coming to the end of the NFL season soon.