Peter Wright produced a ruthless display to thrash second seed Rob Cross 10-3 and cruise through to the Grand Slam of Darts quarter-finals.

On a night which saw two closely contested tussles, Wright and Cross were expected to serve up an epic in Wolverhampton, but the 2018 world champion was blown away by an imperious Snakebite.

Cross displayed vulnerability in the group stages – losing to Dave Chisnall and scraping through a last-leg decider against Jamie Hughes, and he was unable to rectify matters against the 2017 finalist, who was in control from the outset.

Wright will take on 2014 finalist Dave Chisnall for a semi-final spot, after the World Grand Prix runner-up swept aside qualifier Ryan Harrington in the evening’s opener.

Smith and Gurney both averaged over a ton in a high-quality affair, although Smith’s power scoring and combination finishing proved decisive as he continued his bid to land his elusive first major title.

Durrant displayed nerves of steel to defeat impressive debutant Gabriel Clemens and will face Smith for a place in the last four, in a repeat of their World Matchplay semi-final back in July.

The pair also met in the group stages and ‘Duzza’ was unhappy at what he perceived to be disrespectful comments from Bully Boy surrounding Durrant’s place in the tournament as a BDO representative. Wright made a blistering start to proceedings but perhaps did not secure the advantage his dominance deserved, registering legs of 14, 11 and 13 darts to lead 3-2 – averaging 112.60 to Cross’ 96.

Nevertheless, Snakebite was duly rewarded for his relentless consistency in the second session as ‘Voltage’ failed to find a spark. The seventh seed closed out 17 and 14 dart legs to increase his lead to 5-2, before capitalising on a missed double from Cross to produce a clinical 102 checkout and continue the procession.

Snakebite claimed a fourth straight leg with a 15-dart break and despite registering a mediocre 10th leg, he was not punished by the under-par second seed and sank double two to edge closer to a comprehensive success. 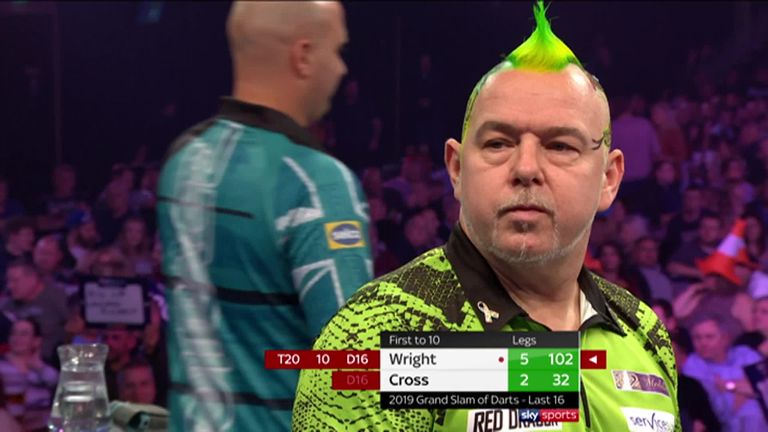 Wright rattled off a sixth straight leg with an effortless 82 combination to move to within a leg of victory, before wiring the bull for a 124 roof-raiser.

Cross prolonged the contest by taking out 72 although this did not an inspired fightback, as Wright clinched his progression with his sixth match dart at double 10. In a battle between two of the world’s top six, third seed Smith came out on top to secure just his second win over the Northern Irishman in their last five meetings.

The St Helens star drew first blood before Gurney reeled off three legs on the spin to seize the early initiative, although Smith reduced the arrears at the interval with a sumptuous 11-darter. ‘Super Chin’ restored his two-leg buffer with a 13-darter before a blistering barrage from Smith swung the pendulum – four successive legs in 14, 11, 13 and 15 darts, featuring finishes of 100 and 110 saw him open up a 6-4 cushion.

The pair traded breaks of throw as Gurney attempted to cut the deficit, although Smith’s consistency throughout his game was proving difficult to contend with. 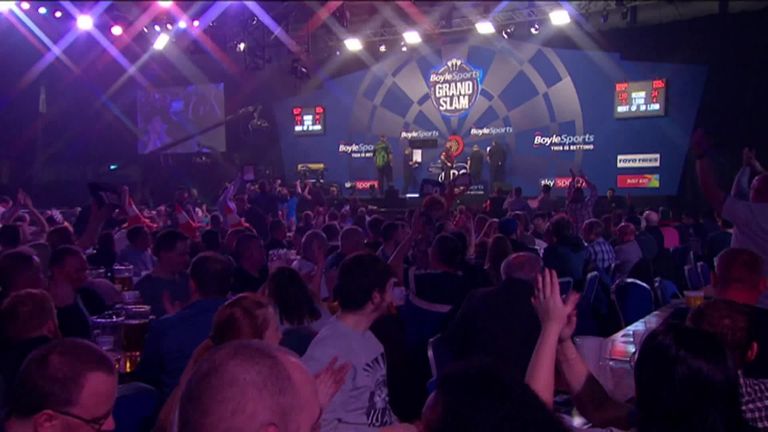 Smith’s Achilles heel is often his profligacy in the doubling department and although he was clinical in the opening exchanges, he spurned six darts at double for a 9-6 lead, which saw sixth seed Gurney close to within one.

Nevertheless, roles were reversed moments later as Gurney missed two at double eight to square the contest and Smith sank a vital 69 checkout to move to the brink of victory, before sealing the deal with an assured 13-darter via tops. 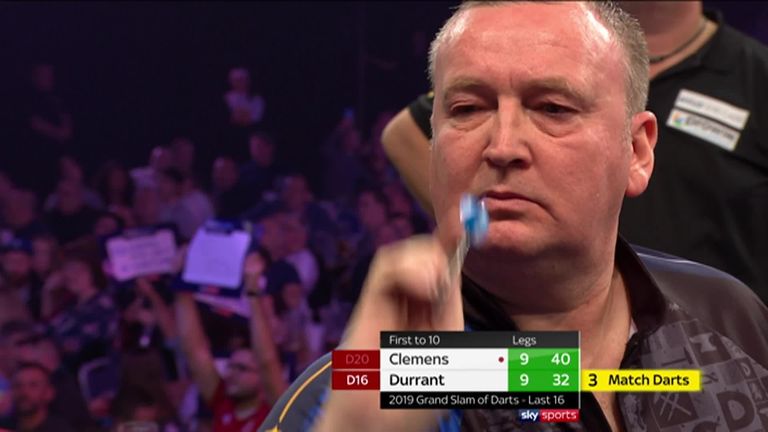 Durrant recovered from 7-4 down and survived a match dart to defeat Clemens in a gripping deciding-leg tussle to secure a place in his second Grand Slam quarter-final.

Clemens boasted a group stage average of over 102 – the highest in the bottom half of the draw, and he maintained that fine form by racing into a 3-0 lead. 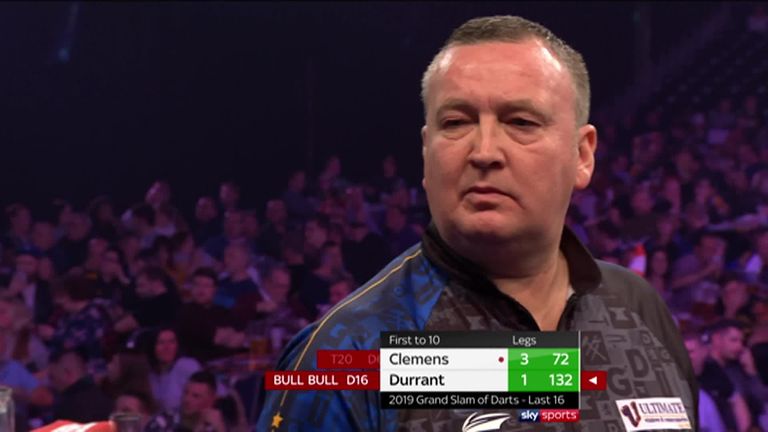 The three-time BDO world champion responded with an eye-catching 132 finish on the bull en route to restoring parity at three apiece, but Clemens remained unfazed and rattled off 110 and 66 combinations to lead 6-4 with a 104 average.

‘The German Giant’ restored his three-leg buffer with a nerveless 106 checkout in leg 11, although yet again Durrant fought back – crucial finishes of 107 and a two-dart 80 combination levelling up proceedings at 7-7. 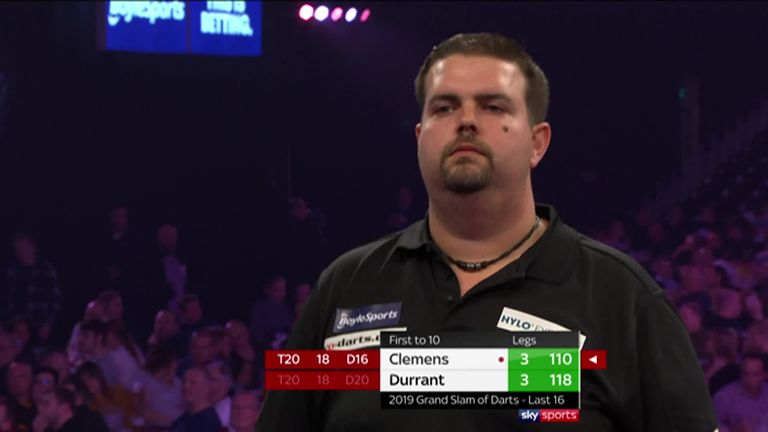 Clemens edged back ahead courtesy of a quality 12-dart hold and with the next two legs shared, the German was one leg away from reaching a first major televised quarter-final.

However, Clemens spurned one match dart at tops which saw Durrant force a decider and despite not having led at any stage in the match, the Teessider delivered when it mattered – firing in a nerveless 14-darter to prevail in a classic. Chisnall secured a place in his second Grand Slam quarter-final after wrapping up an emphatic 10-3 win over Harrington with a 102 average.

Harrington – ranked 95th in the PDC, kicked off proceedings with three consecutive 140s to underline his intentions, but Chisnall stole the early initiative courtesy of back-to-back 14-darters.

The St Helens star extended his lead to 4-0 with a clinical 104 kill on tops, but Harrington stopped the rot and opened his account with a sparkling 154 checkout. 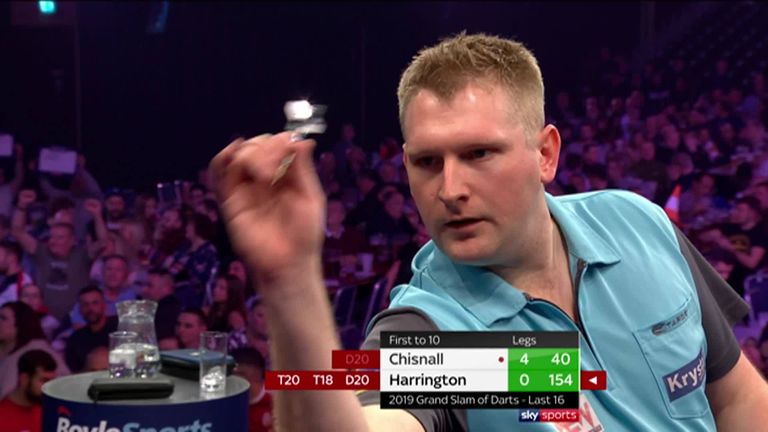 Chisnall increased his lead to 7-1 with legs of 13, 14 and 11 darts as his average climbed above 106, but Harrington was unfazed and registered back-to-back legs to reduce the arrears to 7-3 – following up a 13-dart break with a classy 87 checkout.