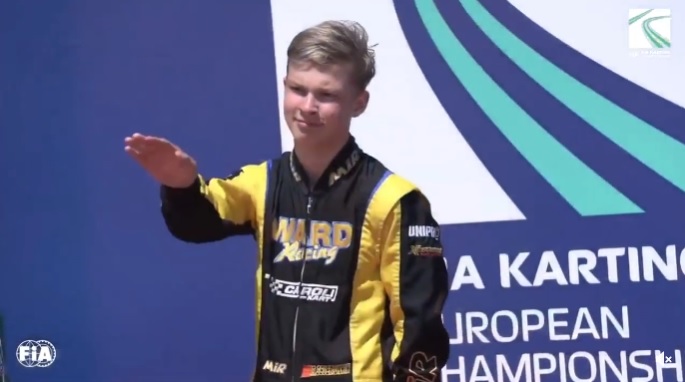 Russian go-kart champion Artem Severiukhin performed a Nazi salute on the podium after winning a race in Portugal over the weekend.

The 15-year-old finished first in the opening race of the European Karting Championship in Portimao on Sunday.

But as he stood on the podium during the post-race ceremony, Severiukhin tapped his chest and held out his right arm while the Italian national anthem was being played.

Severiukhin then laughed moments after performing the gesture, which was also used during the reign of Italy’s fascist dictator Benito Mussolini.

In response to Russia’s invasion of Ukraine, the FIA, motorsport’s governing body, allows Russian drivers to still compete at events but Russia’s flag cannot be displayed, while the national anthem cannot be played during the post-race ceremonies.

As a result, Severiukhin raced under Italy’s flag during Sunday’s event in Portugal.

Severiukhin is not the first Russian athlete to spark controversy since the invasion of Ukraine as 20-year-old gymnast Ivan Kuliak wore his nation’s ‘Z’ war symbol during a medal ceremony in Doha.

The symbol has been seen painted on Russia’s military vehicles since their invasion of Ukraine began.

Kuliak, who wore the symbol alongside a Ukrainian gymnast, defended his decision after it caused outrage.

‘If there was a second chance and I had a choice whether to go out with the letter ‘Z’ on my chest or not, I would do the same,’ he told Russia Today.

‘I saw it on our military and looked at what this symbol means. It turned out to be ‘for victory’ and ‘for peace’. I just wanted to show my position. As an athlete, I will always fight for victory and play for peace.’